Chelsea will have a place in the FA Cup semi-finals in their sights when they welcome Sheffield United to Stamford Bridge for the quarter-final on Sunday.

The FA Cup quarter-finals are underway and on Sunday, the remaining two fixtures will be played out. The first of those games will take centre-stage in west London, with Chelsea playing hosts to Sheffield United at Stamford Bridge in the lunch-time kick-off.

Chelsea progressed to the quarter-finals of the FA Cup after beating Morecambe, Luton Town and Barnsley in the previous three rounds, with Sheffield United being the first Premier League team they will face in the cup competitions this term. Speaking of, the Blades are also in the same boat, having gone past Bristol Rovers, Plymouth Argyle and Bristol City en route to the Last Eight stage.

As far as recent form is concerned, Chelsea have been extremely professional under the tutelage of Thomas Tuchel, who is yet to oversee a defeat while in-charge of the Blues. The latest success came in the form of the 2-0 win over Atletico Madrid earlier this week, which sealed their place in the UEFA Champions League quarter-finals.

Sheffield United, on the other hand, have been in all sorts of problem, having won just two of their last eight games in all competitions, including the aforementioned win over Bristol City. Such a dreadful run of results and more ultimately ended up costing Chris Wilder his job as the Blades’ manager, with Paul Heckingbottom taking interim charge of the side.

Chelsea and Sheffield United have already locked horns twice this season, with the Blues winning both the Premier League clashes. Ahead of the latest meeting between the two sides, The Hard Tackle takes a closer look at the encounter.

Thomas Tuchel has been handed a major boost on the team news front ahead of the visit of Sheffield United. On Sunday, the Chelsea manager will be bereft of the services of just one first-team player, with as many as four squad members being back at his disposal.

Andreas Christensen has recovered from his illness and will likely return to the starting lineup, while Tammy Abraham has trained this week and will be in contention to feature. The remaining two players who are available again are Jorginho and Mason Mount, with the duo having been suspended for the UEFA Champions League tie against Atletico Madrid.

The only Chelsea player remaining on the sidelines is Thiago Silva, who is expected to be back after the international break. In his absence, Christensen ought to sit at the heart of the three-man central defensive unit, with Kurt Zouma and captain Cesar Azpilicueta starting alongside him at the back. In goal, Kepa Arrizabalaga will get a rare opportunity to impress.

Heavy rotations will be in order in the remaining of the side as well, with Callum Hudson-Odoi and Ben Chilwell coming in as the two wing-backs, while Jorginho will return and have Billy Gilmour as his partner in the middle of the park. As far as attack is concerned, Christian Pulisic will also get a rare start, lining up alongside Mason Mount and Olivier Giroud in the final third. 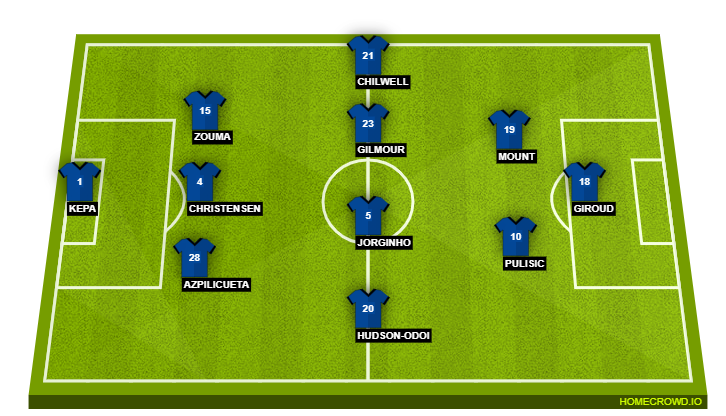 Like his counterpart in the Chelsea dugout, Paul Heckingbottom is set to welcome back one first-team player in David McGoldrick when Sheffield United pay the Blues a visit at Stamford Bridge. However, the Blades’ interim boss will still continue to have to make do without five players.

The major problem lies in defence, with the likes of Jack O’Connell, Jack Robinson and John Egan being on the sidelines due to their respective injuries. In addition, Sander Berge and Jack Rodwell are also unavailable, although Heckingbottom has enough cover in his ranks in midfield. Meanwhile, Ethan Ampadu cannot feature against parent club, Chelsea.

Aaron Ramsdale will take his place between the sticks on Sunday, with Sheffield United set to line up in a 3-5-2 formation against Chelsea. The backline ought to comprise of Chris Basham, Enda Stevens and Kean Bryan, with Max Lowe and Jayden Bogle being the two wing-backs.

In the middle of the park, Oliver Norwood will aim to keep things tight while getting defensive support from John Lundstram and Ben Osborn, who will also provide the forward thrust from the centre. Finally, the strike partnership should feature Rhian Brewster and the fit-again McGoldrick, who has taken part in training this week. 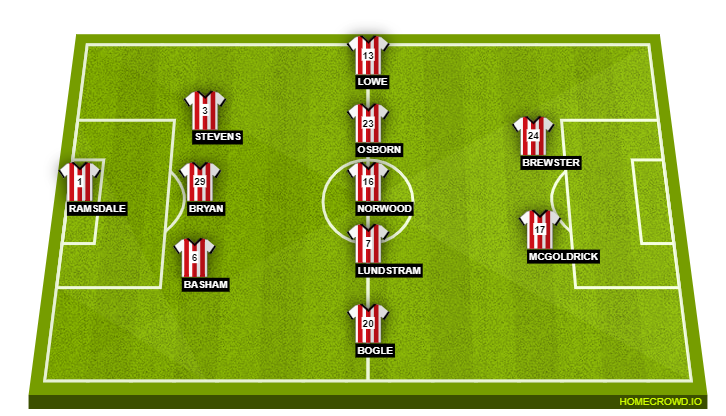 Things are going from bad to worse for Kepa Arrizabalaga at Chelsea, as it looks like he does not have much of a future at Stamford Bridge without even being given the chance to impress Thomas Tuchel. The links with Jan Oblak have been intensifying while there are rumours that Gianluigi Donnarumma is also on the Blues’ radar.

In all this, Kepa is running out of chances to turn the tide at Chelsea, although he is set to get a rare start against Sheffield United on Sunday. While he might not be tested a great deal, the Spaniard will hope to be efficient in his display. After all, that is all he can do right now amid the difficult situation he has been put in.

This one should be extremely straightforward for Chelsea. They might not score by the truckloads against Sheffield United like Leicester City did in the Premier League last weekend, but they will be fairly comfortable all throughout the ninety. With that in mind, The Hard Tackle predicts a 2-0 win for Thomas Tuchel & co.