A place in the penultimate stage of the competition will be up for grabs when Everton welcome Manchester City to Goodison Park in the FA Cup quarter-finals on Saturday.

The FA Cup resumes this weekend, with the four quarter-finals set to be played out. Two matches are on show on Saturday, with the second of those being played at Goodison Park, where Everton will play hosts to Manchester City in a heavyweight clash.

Everton have enjoyed a solid 2020/21 season under the tutelage of Carlo Ancelotti so far. The Toffees are dreaming of a top four finish, with qualification for European football quite likely. Their recent run of form has been a little wobbly, with Ancelotti’s men losing each of their last two games.

Manchester City, on the other hand, are flying high despite a mini blip that came in the form of their recent defeat to Manchester United. Hopes of a quadruple remain high, especially with the Citizens easing into the UEFA Champions League quarter-finals this week. Their recent run has been solid, with Pep Guardiola & co. cruising to three victories in as many games.

🤕 | Carlo says we will be without Pickford, Olsen and James, as well as Doucouré, Gbamin and Delph for tomorrow's #EmiratesFACup quarter-final against @ManCity.

Carlo Ancelotti does not have any fresh injury concern hampering his preparations ahead of the visit of Manchester City. On Saturday, the Everton manager will be bereft of the services of as many as six first-team players.

The likes of Jordan Pickford, Robin Olsen, Fabian Delph, Abdoulaye Doucoure, Jean-Philippe Gbamin and James Rodriguez all remain on the sidelines, with each of the six players only likely to be available after the international break.

In the continued absence of Pickford and Olsen, Joao Virginia will retain his spot in goal for Everton, who will line up in a 4-3-1-2- formation against Manchester City on Saturday. At the back, Yerry Mina and Michael Keane will form the central defensive partnership, with Ben Godfrey and Lucas Digne being the two full-backs.

Allan will reprise the holding midfield role up ahead, with Tom Davies and Andre Gomes providing defensive support to the Brazilian. Gomes will also aim to provide the forward thrust from the middle of the park, with the creative onus falling on Gylfi Sigurdsson. Finally, Richarlison and Dominic Calvert-Lewin will form the strike partnership for Everton. 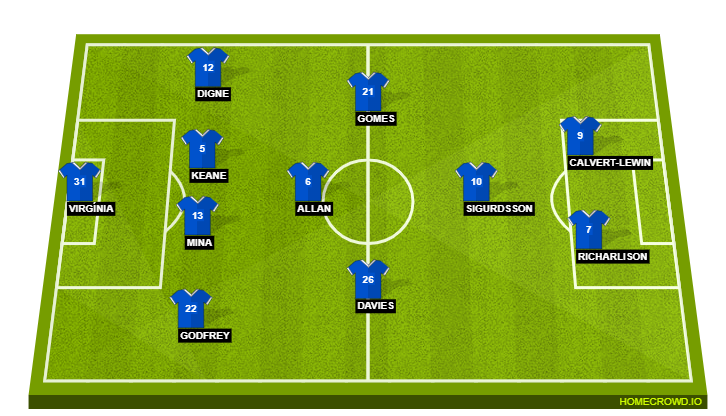 Unlike his counterpart in the Everton dugout, Pep Guardiola does not have any new roster issues to deal with ahead of the trip to Goodison Park. In fact, on Saturday, the Manchester City boss will have a full-strength squad at his disposal.

Seeing as this is an FA Cup game, Zack Steffen will earn a rare spot in the starting lineup for Manchester City, who will be set up in their usual 4-3-3 formation. Joao Cancelo and Oleksandr Zinchenko ought to be the two full-backs, with Aymeric Laporte coming in to partner Ruben Dias at the heart of the Manchester City defence.

Up ahead in midfield, Rodri will sit at the base of the three-man unit, aiming to assert Manchester City’s control on the game. Kevin De Bruyne and Ilkay Gundogan will sit alongside him in the middle of the park, with the creative onus being on the duo.

Finally, in attack, Sergio Aguero will have a chance to turn his week around when he leads the line for Manchester City against Everton. The Argentinean striker will be supported by Ferran Torres and Raheem Sterling in the final third, from the flanks. 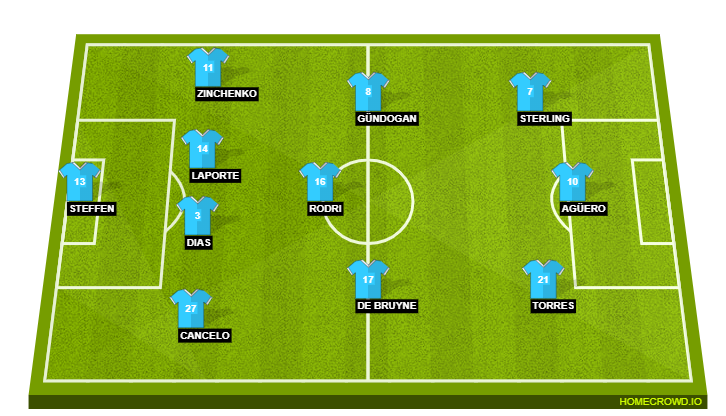 It has not been a week to remember for Sergio Aguero, who cut a dismayed figure against Borussia Monchengladbach following a cameo spent in anonymity. Since then, he has been linked with a summer exit, with even a move to Chelsea being mooted for him.

For Aguero, though, the motive will remain to deliver the goods for Manchester City and hopefully secure his future at the club that has been his home for ages now. Having said that, the clock is ticking and the time is starting to run out for the veteran striker to nail down his spot in the squad and continue as a valuable member in Pep Guardiola’s squad, making Saturday’s game a critical one.

Cup fixtures tend to bring out some fascinating football matches and when it comes to a side that is as brimming with potential as Everton is, there is every chance of an upset. Having said that, this season, Manchester City have become a ruthless side that is hardly slipping up and despite getting a scare, they should hold their own and escape by the narrowest of margins. The Hard Tackle goes for a 2-1 win for Pep Guardiola & co.