Arsenal will hope to reach the UEFA Europa League quarter-finals when they welcome Olympiacos to the Emirates for the Round of 16 second leg on Thursday.

The UEFA Europa League is set to resume this Thursday, with the eight second leg fixtures in the Round of 16 set to be played out on the day. One of the earlier games will be played in London, where Arsenal will play hosts to Olympiacos at the Emirates, looking to book their place in the Last Eight stage.

Arsenal enjoyed a perfect group stage campaign, finishing atop Group B with six wins in as many games. The Gunners then progressed from the Round of 32 by the skin of their teeth, beating Benfica 4-3 on aggregate. Mikel Arteta’s men have been on a decent run of form lately, winning four of their last five games (D1), including an impressive 2-1 victory over Tottenham this past weekend.

Olympiacos, on the other hand, reached the knockout stages of the Europa League after finishing third in their group in the UEFA Champions League. In the previous round, the Greek giants beat PSV Eindhoven 5-4 on aggregate. Pedro Martins & co. have been quite inconsistent in recent weeks, winning five of their last ten games in all competitions.

The first leg, played last week, saw Arsenal claim a critical 3-1 win over Olympiacos, with Martin Odegaard, Gabriel Magalhaes and Mohamed Elneny on target. Ahead of the latest meeting between the two sides, The Hard Tackle takes a closer look at the encounter.

Bukayo Saka is out with a hamstring injury. (Photo by Shaun Botterill/Getty Images)

Mikel Arteta has a fresh fitness issue hampering his preparations ahead of the visit of Olympiacos for the UEFA Europa League Round of 16 second leg. On Thursday, the Arsenal manager will be bereft of the services of one first-team player.

The only absentee for the Gunners is Bukayo Saka, who is nursing a hamstring injury he sustained in the north London derby this past weekend. With Saka unavailable, Nicolas Pepe could get a chance to impress, making a rare start on the right-wing.

Martin Odegaard is starting to settle in well at the Emirates and will hold on to his spot as the no. 10, with Emile Smith Rowe continuing on the left flank. Smith Rowe, though, will constantly take up central areas, allowing the left-back – Kieran Tierney – to overlap at every given opportunity.

At the head of the attack, Pierre Emerick Aubameyang will lead the line for Arsenal, hoping to make a point after being dropped for disciplinary reasons this past weekend by Arteta. The Arsenal captain will come in for Alexandre Lacazette, who will be an option off the bench.

In midfield, Thomas Partey could do with a breather and should make way for Dani Ceballos, who will start in the double pivot along with Granit Xhaka. A couple more changes in defence should see Hector Bellerin and Pablo Mari return, with the latter partnering David Luiz at the heart of the Arsenal defence. In goal, there is no looking past Bernd Leno. 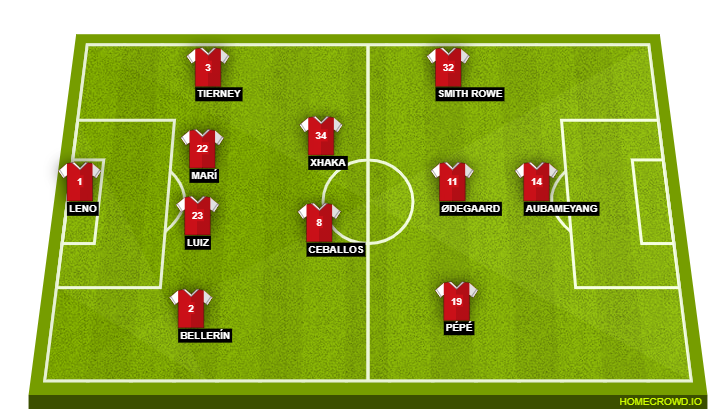 Unlike his counterpart in the Arsenal dugout, Pedro Martins does not have any fresh concerns to deal with ahead of the trip to the Emirates. However, the Olympiacos manager is missing as many as three first-team players, with defence, in particular, posing a problem.

Ousseynou Ba continues to struggle with a back issue and could miss out while Ruben Semedo and Avraam Papadopoulos remain on the sidelines with their respective injuries. As a result, Yann M’Vila is expected to feature at the heart of the Olympiacos defence as a makeshift centre-back, with former Arsenal defender Sokratis being his partner.

Like Arsenal, Olympiacos will line up in a 4-2-3-1 formation, with Jose Sa taking his place in goal. Kenny Lala and Oleg Reabciuk will be the two full-backs, both of whom should be given the license to bombard forward and add more numbers in the final third.

Up ahead in midfield, Mady Camara will sit in the double pivot alongside captain Andreas Bouchalakis, with the duo having the responsibility of shutting off the threat of Arsenal’s creative personnel in the middle of the park. Mathieu Valbuena will reprise the no. 10 role while Bruma and Georgios Masouras will be the two wide men, with Youssef El Arabi leading the line for Olympiacos. 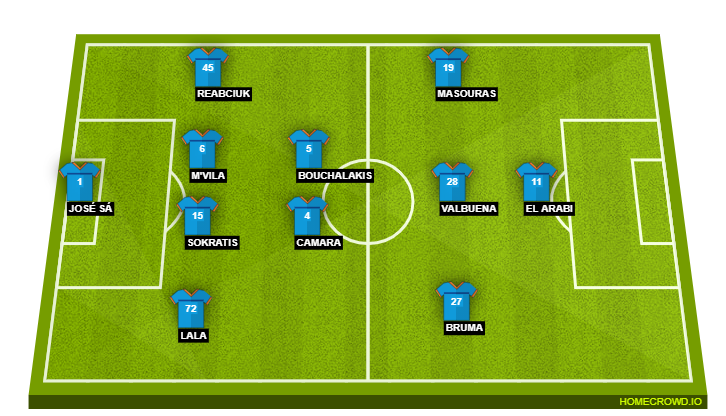 Who else but Aubameyang, especially after what transpired on the weekend. The Arsenal captain was a shock omission from the lineup against Tottenham Hotspur, having been excluded due to disciplinary reasons, although Arteta admitted it was only a one-time thing.

Having now served his punishment, the Gabonese striker will be eager to make a point and prove to Arteta that he can once again make the headlines for all the right reasons. The humbling against Olympiacos from last season will still be fresh in his mind as well and one can be certain that Aubameyang will go into this match with a lot of motivation to perform. Will he deliver the goods?

Arsenal are firmly in control of this tie, meaning Olympiacos will start the second leg desperately looking for goals. This ought to create spaces in the final third for the Gunners, which should duly be exploited by the likes of Emile Smith Rowe, Martin Odegaard and Pierre-Emerick Aubameyang. We are predicting a straightforward win for Arsenal, who will take this 2-0 to reach the quarters.