Arsenal will be hoping to take a step closer to the UEFA Europa League quarter-finals when they take on Olympiacos at the Karaiskaki Stadium on Thursday.

The UEFA Europa League is back this week, as the knockout stages resume with the Round of 16 fixtures set to be played this week. Arsenal will resume their campaign at the Karaiskaki Stadium, where Olympiacos will host them in the first leg.

Olympiacos dropped down to the UEFA Europa League after finishing third in their Champions League group. In the Round of 32, the Greek champions faced PSV Eindhoven and their tie went down the wire as they edged out the Dutch outfit 5-4 on aggregate. Pedro Martins & co. have not been in fine touch of late, though, having won just two of their last five games.

Arsenal, on the other hand, have been a part of the Europa League from the group stage campaign itself, with the Gunners comfortably topping their group. In the Round of 32, the Gunners just about edged their opponents as well, having beaten Benfica 4-3 on aggregate. And, much like their hosts, Mikel Arteta’s men have won just two of their last five matches.

Olympiacos were the victors the last time they met Arsenal, as they knocked out the English giants out of the Europa League at the Last 32 stage last season. Ahead of the latest meeting between the two sides, The Hard Tackle takes a closer look at the encounter.

🔴⚪️💬 @CoachPMartins: «We at Olympiacos know what we have to do, with all due respect to our opponent. We will give all we got, as we always do, holding up to our identity in the pitch. This will never change, no matter the opponent we’re facing!».#Οlympiacos #UEL #OLYARS pic.twitter.com/ifu5bs6Ud2

Pedro Martins has a number of pressing injury concerns hampering his preparations ahead of the visit of Arsenal. On Thursday, the Olympiacos manager will be bereft of the services of as many as four first-team players.

In particular, though, defence poses a major issue, with  Ruben Semedo, Avraam Papadopoulos and Ousseynou Ba all out injured. That has left Martins with Sokratis Papastathopoulos as the only somewhat fit centre-back at his disposal, with the former Arsenal defender also nursing a minor shoulder injury.

Sokratis, though, should start against Arsenal, with Yann M’Vila expected to deputise at the heart of the Olympiacos defence. Out wide, Oleg Reabciuk and Kenny Lala are expected to be the two full-backs, with Jose Sa set to take his place in goal.

Mady Camara and captain Andreas Bouchalakis will pair up in the midfield double pivot, with the duo primarily being tasked with keeping things tight in the middle of the park and negating the influence of Bukayo Saka. In attack, Konstantinos Fortounis will have a free role, with Mathieu Valbuena and Bruma being the wide men while Youssef El Arabi will lead the line for Olympiacos against Arsenal. 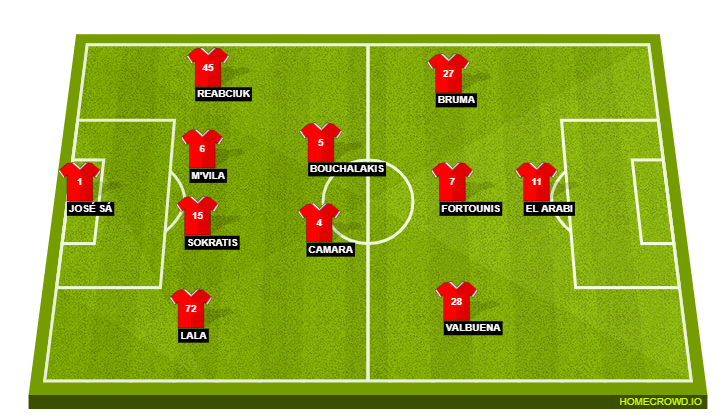 Unlike his counterpart in the Olympiacos dugout, Mikel Arteta does not have any fresh issues to deal with ahead of the trip to the Karaiskaki Stadium. In fact, on Thursday, the Arsenal boss could have a full strength squad at his disposal, with Emile Smith Rowe and Runar Alex Runarsson nearing their returns from injury.

Smith Rowe, though, is unlikely to be risked straightaway even if he is fit, with Martin Odegaard expected to continue reprising the no. 10 role. The Norwegian playmaker will feature alongside Bukayo Saka and Nicolas Pepe in the Arsenal attack, with Pierre-Emerick Aubameyang expected to lead the line against Olympiacos ahead of Alexandre Lacazette.

A key decision in midfield should see Dani Ceballos come in for Thomas Partey to partner Granit Xhaka in the double pivot. Xhaka will be eager to make amends after a calamitous showing last time out against Burnley in the Premier League, whereas Ceballos will look to provide the forward thrust from midfield.

As for defence, Hector Bellerin will be hoping for a recall after being snubbed in favour of Calum Chambers this past weekend. Gabriel Magalhaes should return as well, pairing up with David Luiz at the heart of the Arsenal defence, which will be completed by Kieran Tierney. Finally, Bernd Leno will likely feature between the sticks, starting ahead of Mat Ryan. 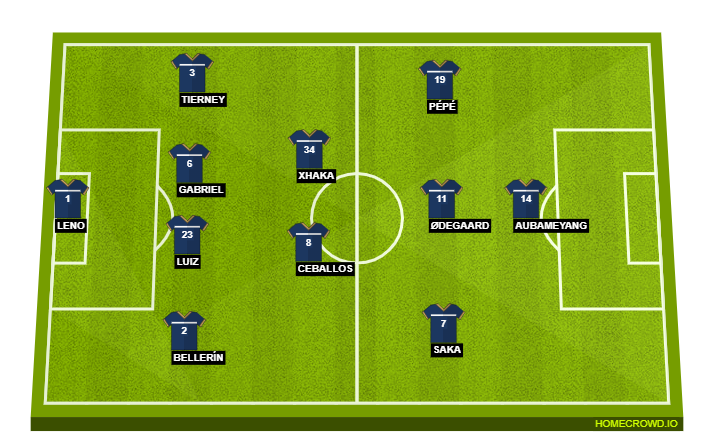 While the spotlight will surely be on the likes of Bukayo Saka and Pierre-Emerick Aubameyang, the onus will also fall on Nicolas Pepe if Arsenal are to be comfortable victors against Olympiacos. It is also an important fixture for Pepe for another reason, as he looks to nail down his spot as a regular in the latter stages of the season.

Willian has recently managed to carve out a place for himself in the Premier League, but with the Brazilian hardly being consistent, a big opportunity beckons Pepe, who has impressed in fits and parts. If he manages to make an impression against Olympiacos, he will not only have inspired a positive result but also helped his own cause going forward.

Revenge will be on the mind of Mikel Arteta and many of his charges when they take the field versus Olympiacos on Thursday. Indeed, many of those set to be involved in the first leg were a part of the embarrassing ouster last season and it will be interesting to see if they have learned any lessons from that defeat.

As for the hosts, they have not been at their free-flowing best lately and Arsenal will feel they are ripe for the taking, especially considering the Gunners have showed some improvements in the past month or so. Expect Arsenal to take the game to Olympiacos before edging the first leg narrowly by a 2-1 scoreline to grab the initiative in the Round of 16 tie.