Manchester City will aim to get their Premier League title onslaught back on track when they welcome Southampton to the Etihad on Wednesday.

The games continue to come at an express pace all across Europe and while many are busy playing continental games, Manchester City will play one of their fixtures from Gameweek 33 of the Premier League which has been pulled forward, as they play hosts to Southampton at the Etihad on Wednesday night.

Manchester City have come a really long way since making a sluggish start to the 2020/21 Premier League. Having once been dawdling in the bottom half of the table, Pep Guardiola & co. are now the runaway leaders, almost destined to win the title come May. Having said that, the Citizens did hit a bit of a snag in their title bid after being handed a 2-0 defeat by Manchester United last weekend.

Southampton, on the other hand, have gone in the exact opposite direction of Manchester City. The Saints were once being billed as outside contenders for European qualification, having shown a lot of resilience in their game. However, Ralph Hasenhuttl’s men are now perilously looking over their shoulders, with 18th-placed Fulham just seven points behind, having won just two of their last 15 Premier League games.

The reverse fixture, played at St. Mary’s back in December, saw Manchester City eke out a narrow 1-0 win over Southampton, with Raheem Sterling scoring the only goal of the game. Ahead of the latest meeting between the two sides, The Hard Tackle takes a closer look at the encounter.

Pep Guardiola has a full strength squad at his disposal. (Photo by Michael Regan/Getty Images)

Pep Guardiola does not have any pressing injury concerns to contend with ahead of the visit of Southampton. In fact, on Wednesday, the Manchester City manager will boast of a full strength squad, with Nathan Ake back at his disposal after recovering from his long-term injury issue.

However, Ake is unlikely to be thrust in the Manchester City defence straightaway, although a couple of changes are expected at the back. Aymeric Laporte ought to come in for John Stones, with Ruben Dias continuing at the heart the backline.

Out wide, Kyle Walker is a certainty following a sub-par showing by Joao Cancelo last time out while Oleksandr Zinchenko ought to keep his place as the left-back. In goal, there is no looking past Ederson Moraes.

Up ahead in midfield, Bernardo Silva should replace Kevin De Bruyne, who looked quite off colour against Manchester United. Fernandinho is likely to sit at the base of the three-man midfield, with Ilkay Gundogan combining with Silva to provide the creative impetus in the middle of the park.

The attacking trio should have an entirely new look, with Sergio Aguero getting a rare opportunity to lead the line for Manchester City in place of Gabriel Jesus, who is being linked with a bevy of top European clubs. Raheem Sterling and Riyad Mahrez, meanwhile, should make way for Phil Foden and Ferran Torres in the wide attacking slots. 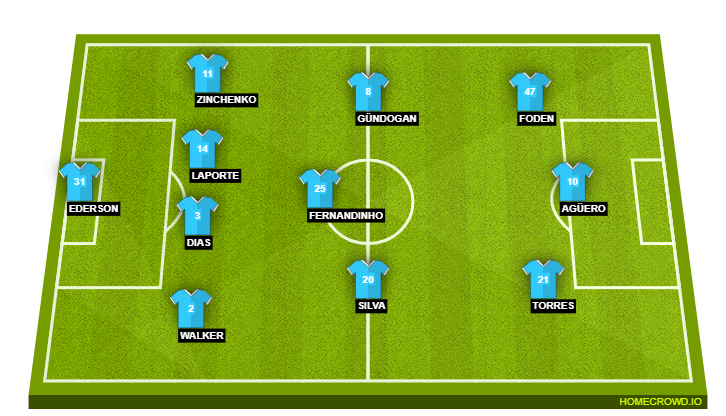 Unlike his counterpart in the Manchester City dugout, Ralph Hasenhuttl has a fresh injury issue hampering his preparations ahead of the trip to the Etihad. On Wednesday, the Southampton boss will have to make do without as many as five first-team players.

The major absentee is Danny Ings, who sustained a muscle injury last time out against Sheffield United. The English striker, who has recently been linked with Manchester City, will be unavailable until after the international break. Apart from Ings, Theo Walcott and Michael Obafemi are also unavailable, while Oriol Romeu and William Smallbone are long-term absentees.

Fraser Forster has usurped Alex McCarthy between the sticks in the last couple of games and ought to feature in goal against Manchester City as well. In front of him, Southampton will line up in their usual 4-4-2 formation.

Kyle Walker-Peters made a decent impression versus Sheffield United and should retain his spot on the right side of the Southampton defence, with Ryan Bertrand a certainty on the left flank. The central defensive partnership should be manned by Jan Bednarek and Jannik Vestergaard, with Mohammed Salisu missing out.

Up ahead in midfield, Takumi Minamino will be the key man, with the Liverpool loanee likely to be tasked with moving into central areas to get into scoring positions. Stuart Armstrong will be the other wide midfielder, with the Scottish international playing a more creative role.

James Ward-Prowse and Ibrahima Diallo will be stationed in the middle of the park, with the duo looking to nip Manchester City’s attacks in the bud. Ward-Prowse, though, will also have a major role to play in set-piece situations, which will post a major threat for Southampton. Finally, in the absence of Ings, Che Adams will form the strike partnership with Nathan Tella. 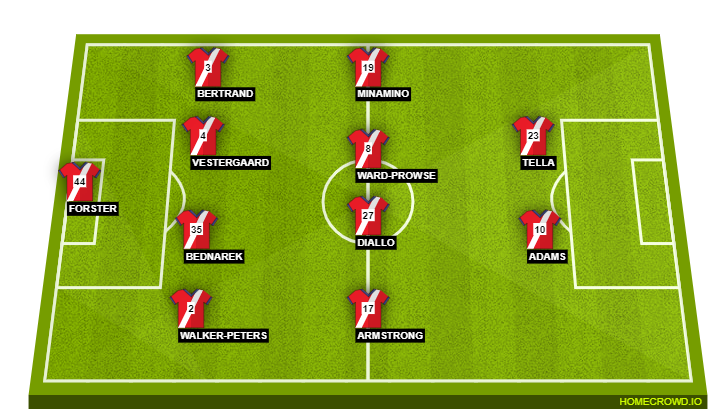 It might not have happened a great deal this season, but the Gabriel Jesus-Sergio Aguero rigmarole is set to resume at the head of the Manchester City attack on Wednesday. Jesus failed to grab his chances against Manchester United last time out and when Southampton come visiting, it will be Aguero’s opportunity to win back his lost spot in the side.

Pep Guardiola has already suggested that patience will be the key if Aguero is going to hit his stride once again. In what has been a season to forget, the time is now for the Argentine to show that he is here to stay and can still contribute at the highest level. If not, he will have taken another step towards the exit gate at the Etihad, with his current deal running out in the summer.

Manchester City were expertly negated by Manchester United on the weekend and Pep Guardiola will demand a reaction from his players. With Southampton being one of the worst teams on form in the division at the moment, the Premier League leaders are likely to make a swift return to winning ways. Expect a comfortable evening, with Manchester City running out 2-0 victors.