A place in the UEFA Champions League quarter-finals will be on the line when Juventus face FC Porto in the Round of 16 second leg on Tuesday.

The UEFA Champions League is back this week, with the second leg fixtures of the Last 16 stage set to be played over the next ten days or so. The first of these ties will be completed on Tuesday, when Juventus will play hosts to FC Porto at the Allianz Stadium, hoping to overturn a first leg deficit to progress to the quarter-finals.

Juventus reached the Champions League Round of 16 by topping Group G ahead of Barcelona. Their fortunes in domestic football, though, have not been as positive, as the Bianconeri have been lagging a fair bit behind the two Milan clubs in Serie A all through the season. However, a couple of important wins over Spezia and Lazio would have buoyed Andrea Pirlo & co. ahead of the midweek tie.

FC Porto, too, won their most recent game, beating Gil Vicente 2-0 in the Primeira Liga, where they are 10 points behind leaders Sporting Lisbon. As far as the Champions League is concerned, Sergio Conceicao’s men finished runners-up behind Manchester City in Group C to set up the Round of 16 date with Juventus.

The first leg, played at Estadio do Dragao, saw Porto eke out a narrow 2-1 win over Juventus and ahead of the latest meeting between the two sides, The Hard Tackle takes a closer look at the encounter.

Andrea Pirlo has a fresh roster issue to contend with ahead of the visit of FC Porto for the UEFA Champions League Round of 16 second leg. On Tuesday, the Juventus manager will be bereft of the services of as many as three first-team players.

While Paulo Dybala remains on the sidelines due to a long-term knee injury, Rodrigo Bentancur misses out after contracting the coronavirus. Meanwhile, Danilo is also unavailable due to suspension, meaning the left-back slot will almost certainly be taken up by Alex Sandro.

Bentancur’s abence, on the other hand, means Adrien Rabiot will play the holding midfield role for Juventus against Porto, with Weston McKennie sitting alongside him in the central areas. Aaron Ramsey will be the third midfielder, who will initially start out wide before tucking in when Juventus push forward.

On the opposite flank, Federico Chiesa will take his place, essentially playing the role of a wing-back, with Sandro staying back for the most part. Juan Cuadrado will be the other full-back and he will have a huge role to play going forward. At the heart of the Juventus defence, Leonardo Bonucci ought to pair up with Merih Demiral, while Wojciech Szczesny takes hi place in goal.

Finally, in attack, the key man for Juventus will invariably be Cristiano Ronaldo, who will constantly look to get into scoring areas. The Portuguese superstar will be supported by Alvaro Morata in the final third. 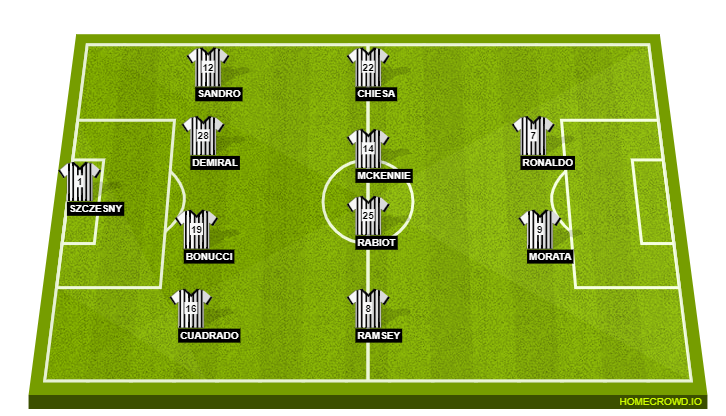 Sergio Conceicao barely has any pressing issues hampering his preparations ahead of the trip to the Allianz Stadium. Against Juventus on Tuesday, the FC Porto boss will only be bereft of the services of one first-team player, with Chancel Mbemba expected to miss out.

Agustin Marchesin is a certainty to feature between the sticks for FC Porto, who will be set up in a 4-4-2 formation that will mirror the basic formation that Juventus will line up in on Tuesday. In front of Marchesin, the defence will comprise of former Real Madrid star Pepe, apart from Diego Leite, Wilson Manafa and Zaidu Sanusi.

The future of Otavio has been under a lot of speculation but against Juventus, the focus will be on putting the Juventus defence under pressure to carve out the openings. Mateus Uribe will likely be the other central midfielder, with the Colombian looking to keep things tight in the middle of the park.

Out wide, Sergio Oliveira and Jesus Manuel Corona will look to remain compact for the most part before charging forward through the central areas, which will largely be overloaded by Porto players. Finally, the strike partnership ought to feature Moussa Marega and Mehdi Taremi, both of whom will aim to get into scoring positions while hoping to be clinical with the few chances they get. 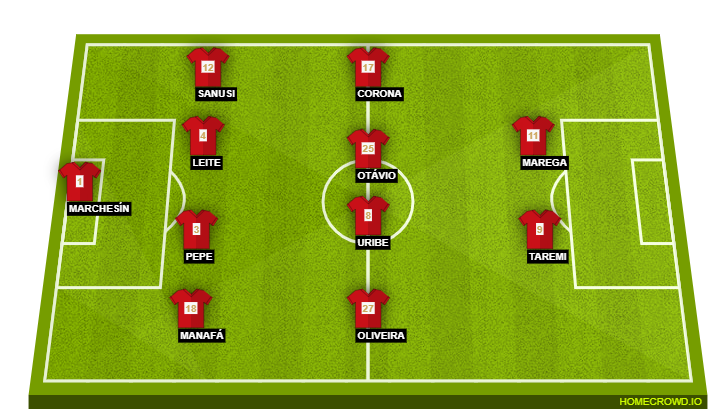 Who else but Mr. Champions League? In the decade gone by, no player looked more at home in the premier club competition in Europe than Cristiano Ronaldo, whose exploits almost singlehandedly paved the way for Real Madrid’s phenomenal dominance in the competition. While not quite at his very best at Juventus, Ronaldo has still maintained high levels in the Champions League.

With Juventus staring down the barrel following a shock defeat in the first leg last month, it is now up to Ronaldo to provide the inspiration and spark a comeback win once again, just like he did against Atletico Madrid a couple of years ago. Will the Portuguese superstar deliver the goods for the umpteenth time this week?

The defeat in the first leg came as a shock, leaving the tie tantalisingly poised. Having said that, Juventus have been quite formidable at home this season and they are unlikely to have their goal breached by FC Porto on Tuesday. On the opposite end, Cristiano Ronaldo should shine through to earn the hosts a narrow, but critical 1-0 win, enough to send Juventus through to the next stage.