AC Milan will be eager to get back to winning ways and re-establish their Serie A title credentials when they take on Hellas Verona on Sunday.

2021 has not been kind on AC Milan, but with the 2020/21 Serie A season getting into the crunch phase with Matchday 26, the time is now for the Rossoneri to step up. On a busy Sunday, Milan will be aiming to get the winning feeling back, when they lock horns with Hellas Verona at Stadio Marcantonio Bentegodi.

Hellas Verona have once again been one of the dark horses in the top five race this season, all while retaining their defensive qualities. Indeed, the Mastini boast the third-best defensive record in Serie A this term and have been one of the most resilient sides in the competition. Currently on a four-game unbeaten run, Ivan Juric’s men have an outside chance of making the Europa League.

AC Milan, on the other hand, were by far the best team in Serie A in 2020 and entered the new year perched atop the Serie A table. But, things have gone south in the past month or so, with the Rossoneri failing to win three of their last four games. As a result, Stefano Pioli & co. have gone from being the pace-setters in the competition to be a part of the chasing pack, currently trailing leaders Inter Milan by six points.

The reverse fixture, played at San Siro back in November, saw AC Milan comes from two goals down to hold Verona to a 2-2 draw, courtesy an injury-time strike by Zlatan Ibrahimovic. Ahead of the latest meeting between the two sides, The Hard Tackle takes a closer look at the encounter.

Ivan Juric has a couple of fresh injury concerns hampering his preparations ahead of the visit of AC Milan. On Sunday, the Hellas Verona manager will be bereft of the services of as many as five first-team players.

The key absentee for the hosts will be key midfielder Adrien Tameze, who sustained a calf injury last time out against Benevento. Apart from the 27-year-old, the likes of Kevin Ruegg (ankle), Ronaldo Vieira (muscle injury), Ebrima Colley (knee) and Nikola Kalinic (muscle injury) are also on the sidelines for Verona.

Marco Silvestri picks himself in goal for Verona and in front of him, Juric should set his side up in a 3-4-2-1 formation, with Koray Gunter, Matteo Lovato and Federico Dimarco taking their places in the three-man central defensive unit.

Up ahead in midfield, Stefano Sturaro ought to deputise for the injured Tameze, partnering captain Miguel Veloso in the double pivot. Meanwhile, Davide Faraoni and Darko Lazovic should continue as the two wing-backs, who will provide the width in the final third, especially considering the two attacking midfielders will tuck in behind the central striker.

The aforementioned striker ought to be Kevin Lasagna, with Antonin Barak and Mattia Zaccagni playing off of him in the final third. The two attacking midfielders will move wide in the defensive phase as the wing-backs drop deep, thereby creating a 5-4-1 formation when Verona are behind the ball. 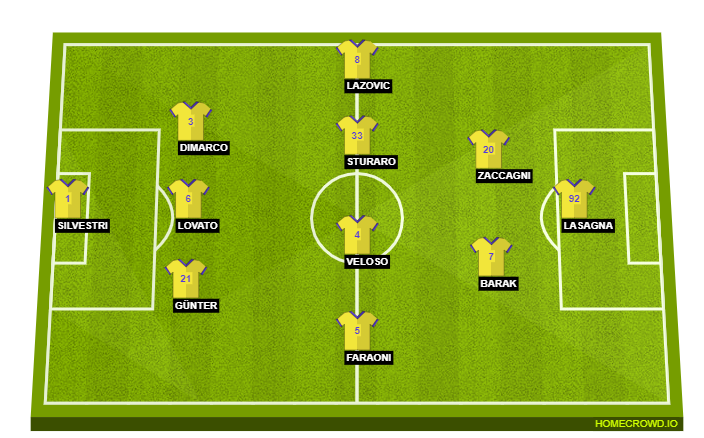 Like his counterpart in the Hellas Verona dugout, Stefano Pioli has a number of pressing injury concerns to contend with ahead of his side’s latest fixture. On Sunday, the AC Milan manager will have to make do without as many as five first-team players.

Each of the five absentees is a key player to some extent for AC Milan, with the likes of Ismael Bennacer (hamstring), Hakan Calhanoglu (hamstring), Mario Mandzukic (muscle injury), Ante Rebic and most importantly, Zlatan Ibrahimovic (groin) all set to miss out against Verona.

However, in some good news, Sandro Tonali is available after recovering from a hamstring complaint of his own. Tonali’s availability means the young Italian international will pair up with Franck Kessie in the double pivot, with the duo looking to set the tempo of the game.

Meanwhile, in the absence of Calhanoglu, Brahim Diaz gets a chance to impress in the no. 10 role, whereas Rafael Leao will lead the line for AC Milan against Verona due to Ibrahimovic’s unavailability.

Diaz will play off of Leao, with Jens Petter Hauge and Alexis Saelemaekers being the two wide men for the visitors. Finally, in defence, the first-choice quartet of Davide Calabria, Simon Kjaer, Alessio Romagnoli and Theo Hernandez are all available, meaning the backline should be in a strong shape while Gianluigi Donnarumma will be stationed between the sticks. 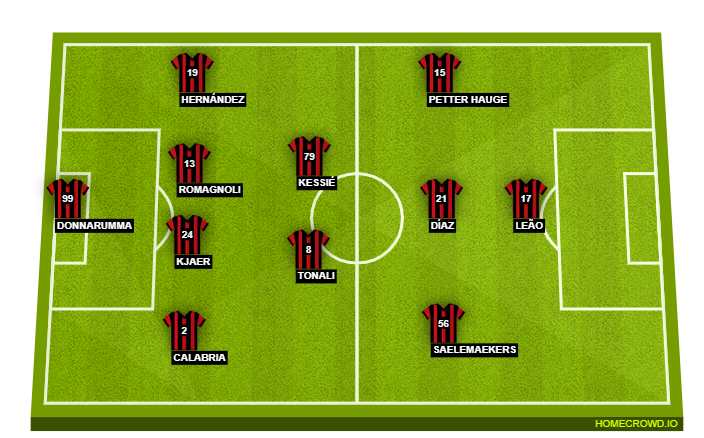 AC Milan have not always suffered in the absence of Zlatan Ibrahimovic this season, with Rafael Leao, in particular, stepping up whenever the Swedish striker has not been up for selection. With the season reaching the crunch phase for the Rossoneri, Leao once again has a lot riding on him.

A stubborn Hellas Verona side will make things difficult for the Portuguese forward and the rest of his attacking teammates. Having said that, if he can raise his levels and showcase the movement he is so capable of, then AC Milan could be inspired to return to winning ways. A big game for Leao in the final third.

This is another one of those potential banana skin encounters that are starting to become a norm for AC Milan. Hellas Verona are not a side to be taken lightly, especially considering their defensive prowess, and the hosts will make things difficult for the Rossoneri, who will look for an early goal to make things easier for them. The game-changing goal should eventually come, with Milan sealing a narrow 1-0 win.