Gameweek 27 of the 2020/21 Premier League season is underway and we have entered the final third of the ongoing campaign. Four matches will be on show on Sunday, with the day’s action being culminated in London, where Tottenham Hotspur will play hosts to Crystal Palace at the Tottenham Hotspur Stadium.

Tottenham Hotspur were once perched atop the table after making a reasonably strong start to the season. However, that time appears to be ages ago now, with Spurs blowing hot and cold in the first couple of months of 2021. In 11 Premier League games this year, Jose Mourinho & co. have drawn one game while winning and losing five times each, all of which means they are currently 8th and lagging behind in the top four race.

Crystal Palace, on the other hand, have been typically goal shy going forward while being resilient for the most part at the back. That was best evident earlier this week, when they held Manchester United to a goalless draw. As things stand, the Eagles are 11 points clear of the relegation zone, meaning they should be safe and able to concentrate on a popular top half finish, with 10th-placed Arsenal just three points ahead.

The reverse fixture, played at Selhurst Park back in December, ended in a 1-1 draw, with Harry Kane opening the scoring for Tottenham before Jeffrey Schlupp secured a point for Crystal Palace with a late goal. Ahead of the latestmeeting between the two sides, The Hard Tackle takes a closer look at the encounter.

Jose Mourinho does not have many pressing injury concerns to contend with ahead of the visit of Crystal Palace. On Sunday, the Tottenham Hotspur manager might only be bereft of the services of two first-team players in the worst case scenario.

Giovani Lo Celso is almost a certainty to miss out due to a thigh injury and is only likely to be back for the UEFA Europa League tie against Dinamo Zagreb. However, Serge Aurier could be in line to return to action after missing the game against Fulham earlier this week

Having said that, Mourinho’s most recent comments did not appear to be all too promising for the Ivorian, although he did suggest that “he is going to be [ok]”. Nevertheless, it looks like Matt Doherty could start on the right side of the Tottenham defence against Crystal Palace, with Sergio Reguilon coming in on the left.

At the heart of Tottenham’s backline, Toby Alderweireld ought to pair up with Davinson Sanchez, who has been incredibly impressive in recent games, while Hugo Lloris is a certainty in goal. Up ahead in midfield, Tanguy Ndombele will once again start in a deeper role in the double pivot.

Pierre-Emile Hojbjerg will once again be the enforcer in the middle of the park, with Ndombele tasked with providing the forward thrust while also giving defensive support to the Dane. The big decision in attack will concern the selection between Lucas Moura and Dele Alli for the no. 10 role.

Judging by Mourinho’s recent team selection, it is likely that Moura will get the nod over Alli, despite being involved in the only goal of the game against Fulham earlier this week. The rest of the attacking quartet pick themselves, with Gareth Bale starting to become indispensable of late while Son Heung-min and Harry Kane are automatic picks. 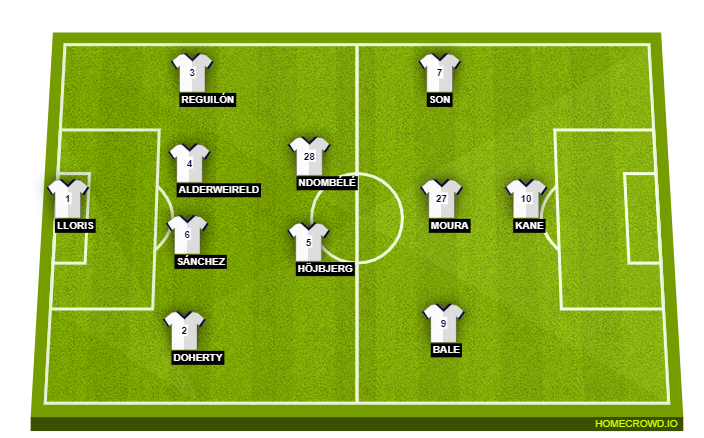 Roy Hodgson has been handed a major boost on the team news front ahead of the trip to the Tottenham Hotspur Stadium. However, the Crystal Palace manager still continues to have to make do without as many as eight first-team players.

Hodgson, therefore, does not have a lot of room to make rotations, although he can still name a strong starting lineup. Vicente Guaita is a certainty in goal, with Crystal Palace set to line up in a 4-4-2 formation against Tottenham on Sunday.

Cheikhou Kouyate should once again take his place at the heart of the Palace defence, with Gary Cahill being his partner. Joel Ward and Patrick van Aanholt ought to be the two full-backs, who will only be a factor in the final third on the break. The second bank of four will see Jairo Riedewald and captain Luka Milivojevic aim to be the conductors of play on and off the ball.

Andros Townsend and Eberechi Eze will bring the X-Factor with their pace on the counter, with the latter also providing the creative impetus higher up the pitch. The onus, though, will invariably be on Zaha, with Christian Benteke lining up alongside him in the strike partnership. 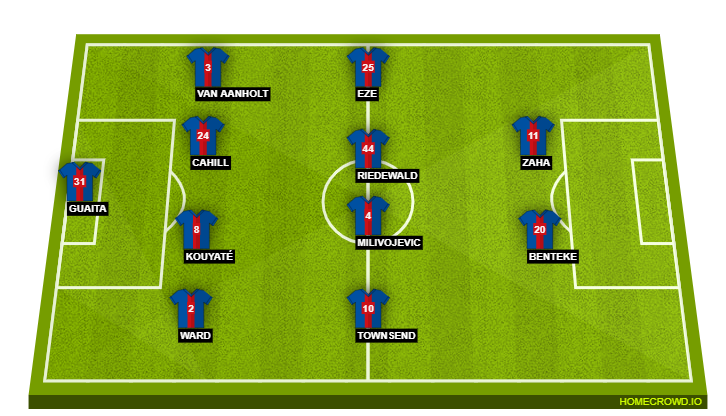 When Gareth Bale returned to Tottenham, there was a lot of optimism as well as a lot of skepticism. The Welshman has vindicated both his believers and his naysayers in equal amount, although lately it is the former who have been given more reason to be positive.

Bale is finally showing some signs of the player he perhaps, still can be at his best – a world beater to some extent. Against a Crystal Palace side that will be set up to frustrate Tottenham, it is Bale’s explosiveness in the final third that will come handy, provided he is at best. Will the Real Madrid loanee step up once again?

Crystal Palace have been decent enough in the last couple of weeks or so and it took a disciplined display to keep Manchester United at bay throughout the 90 last time out. One can expect the Eagles to be in a similar frame of mind once again on Sunday, with Tottenham Hotspur likely to be thwarted by resilient outfit for the most part.

Having said that, the improving form of Gareth Bale coupled with the guile of Harry Kane and Son Heung-min does give Tottenham the edge to make the difference in the crunch moment. The Hard Tackle, therefore, predicts a 1-0 win for Jose Mourinho & co.