Arsenal will be eager to build on their recent mini winning run when they take on Burnley at Turf Moor on Saturday.

The Premier League is coming at us at a relentless pace at the moment, Gameweek 27 set to get underway this weekend. The first match of the weekend will be played at Turf Moor, where Burnley will play hosts to Arsenal in Saturday’s lunch-time kick-off.

Burnley have found stable footing after a slow start to the season, and have been slowly pulling clear of the relegation zone in the last few months. However, their most recent run of form has been a little underwhelming, with the Clarets without a win in four Premier League games, although they earned a creditable 1-1 draw with Leicester City earlier this week.

Arsenal, on the other hand, continue to blow hot and cold in the Premier League, which is not letting them climb up the table and make a case for a top six finish. As things stand, the Gunners are 10th in the standings, and have won just two of their last six top-flight outings. Their most recent result, though, provides cause for optimism, as they handed Leicester a 3-1 defeat last week.

The reverse fixture, played back in December, saw Burnley eke out a shock 1-0 win over Arsenal, with Pierre-Emerick Aubameyang scoring an own goal. Ahead of the latest meeting between the two sides, The Hard Tackle takes a closer look at the encounter.

Ashley Barnes is set to be the only Burnley player missing against Arsenal. (Photo by Alex Livesey/Getty Images)

Sean Dyche has seen his squad’s fitness woes ease up considerably in the past week or so and ahead of the visit of Arsenal, the Burnley manager might be bereft of the services of just one first-team player, with only Ashley Barnes (thigh) sidelined with an injury.

The updates this week have been only positive, with Johann Berg Gudmundsson and Robbie Brady nearing their return to action, having trained all week. In addition, Jack Cork is expected to overcome a tight hamstring to make himself available. Dyche should, therefore, name a strong side to take on Arsenal.

Nick Pope will take his customary place between the sticks on Saturday, with Burnley expected to line up in their usual 4-4-2 formation. Ben Mee and James Tarkowski will form the central defensive partnership, with the duo having a key role to play at the back and shut down the Arsenal attackers. Out wide, Matt Lowton and Charlie Taylor will be the two full-backs.

The midfielders will form the second bank of four that will look to remain compact and deny their Arsenal counterparts any space in the middle of the park. Josh Brownhill and Ashley Westwood will be the central midfielders who will aim to keep things tight and slow down the tempo of the game.

Gudmundsson might be fit to start and the Icelandic international will be one of the two wide midfielders along with Dwight McNeil. The two will carry the bulk of the creative threat, with the two strikers – Jay Rodriguez and Chris Wood posing the majority of the threat from crosses. 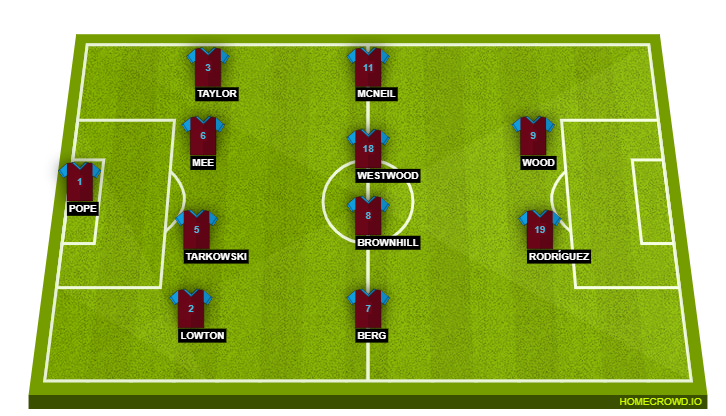 Like his counterpart in the Burnley dugout, Mikel Arteta hardly has any pressing injury concerns hampering his preparations ahead of the trip to Turf Moor. On Saturday, the Arsenal manager will be bereft of the services of just one first-team player in the worst case scenario, with Emile Smith Rowe battling to overcome a muscle injury.

The key decision for Arteta will be to balance his team selection between last week’s wondrous performers and the stars who were rested. In particular, though, the likes of Bukayo Saka and Pierre-Emerick Aubameyang are likely to be recalled, with Martin Odegaard deputising in the absence of Smith Rowe.

Odegaard will combine with Saka to form the creative tandem for Arsenal, providing the forward thrust higher up the pitch. Aubameyang will look to get into scoring areas, while the Alexandre Lacazette, who will lead the line for Arsenal against Burnley, will often drop deep to open up space for Aubameyang to pounce.

In midfield, Granit Xhaka and Thomas Partey will form the double pivot, with the duo looking to be enforcing in the middle of the park and overpower their Burnley counterparts. At the back, Hector Bellerin ought to return as the right-back, with Kieran Tierney being the other full-back. David Luiz and Gabriel Magalhaes should pair up at the heart of the Arsenal defence while Bernd Leno is an automatic pick in goal. 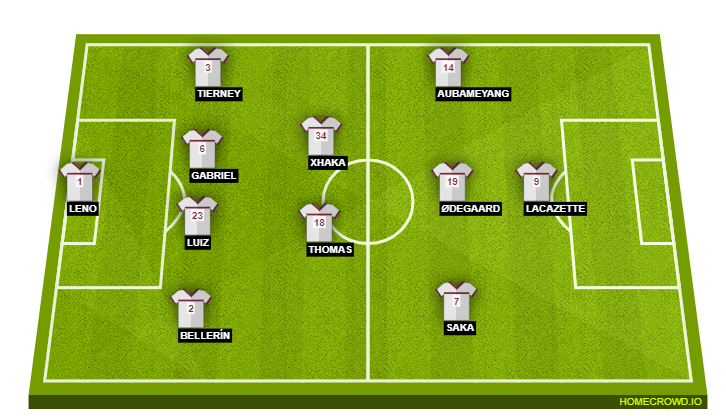 Martin Odegaard’s recent resurgence makes him a possible option for this section, whereas Pierre-Emerick Aubameyang is a viable option as well. However, amid rising uncertainty over his future at the club, Alexandre Lacazette takes the cake to be our Player to Watch for the game versus Burnley.

The French striker has been a rare positive for Arsenal this season, and is currently leading the scoring charts for the Gunners. However, recent reports have suggested that he could be set for a summer exit and Lacazette will be eager to show that he still can provide a lot of value in Mikel Arteta’s squad.

Against a team that will hardly provide any space to work with, Lacazette’s movement will hold the key for Arsenal, meaning that from a purely sporting perspective, he will have a pivotal role to play in the game. A big outing for Lacazette from several angles.

This is a game between two sides that have not exactly been renowned for their goalscoring prowess for the most part this season. Therefore, this is unlikely to be a goal fest, with the slimmest of margins influencing the final result, especially considering both teams will keep things tight at the back. In the end, Arsenal should have enough quality to get the one goal to grab all three points.