Premier League leaders Manchester City will be eager to extend their record-breaking winning run when they welcome Wolves to the Etihad on Tuesday.

The games continue to come thick and fast all across the Premier League, with the elongated Gameweek 26 being played with midweek fixtures. Several matches initially scheduled to be played on Matchday 29 have been pulled ahead due to the upcoming FA Cup ties. One such fixture will be played between Manchester City and Wolves at the Etihad Stadium.

Manchester City have been rampant for months now, with their last defeat in any competition coming way back in November. Currently, Pep Guardiola & co. are on a record-breaking 20-match winning run, with most of those coming in the Premier League. Suffice to say, after a sluggish start to the season, the Citizens are seemingly running away with the title, having opened up a 12-point lead at the top of the table.

Wolves, on the other hand, have blown hot and cold all through the campaign, which has been defined by mediocrity. Unsurprisingly, Nuno Espirito Santo’s men are mired in the lower mid-table battle, currently occupying the 12th spot in the standings. Their most recent, though, has been somewhat of a positive, seeing as they have not faced a defeat in any of their last five league games.

The reverse fixture, played at Molineux back in September, ended in a 3-1 win for Manchester City, with Kevin De Bruyne, Phil Foden and Gabriel Jesus scoring, while Raul Jimenez netted the only goal for Wolves. Ahead of the latest meeting between the two sides, The Hard Tackle takes a closer look at the encounter.

Pep Guardiola has a near-full strength squad at his disposal. (Photo by Dan Mullan/Getty Images)

Pep Guardiola does not have any fresh injury concerns hampering his preparations ahead of the visit of Wolves. On Tuesday, the Manchester City manager will be bereft of the services of just one first-team player, that being Nathan Ake, who will soon be at Guardiola’s disposal as well.

With a near full strength squad up for selection, Guardiola should make a few rotations to keep his troops fresh amid the fixture congestion. However, in goal, there is no looking past Ederson Moraes, with Manchester City expected to line up in their usual 4-3-3 formation against Wolves.

As for the defence, Joao Cancelo and Benjamin Mendy are likely to come in for Kyle Walker and Oleksandr Zinchenko in the full-back slots. The duo will have the task to provide width higher up the pitch instead of veering infield to support the holding midfielder, although Cancelo will undertake that responsibility from time to time.

At the heart of the Manchester City defence, there is no looking past John Stones and Ruben Dias. Up ahead in midfield, Rodri ought to replace Fernandinho at the base of the three-man unit, with the Spanish international setting the tempo of the game.

Kevin De Bruyne, though, could be given a breather ahead of the Manchester derby this weekend, which could be a virtual six-pointer. Bernardo Silva will instead get the chance to impress, with Ilkay Gundogan being the other creative midfielder. The German international will also take up positions higher up the pitch and look for scoring opportunities.

Finally, in attack, Guardiola should make wholesale changes, with Sergio Aguero, Ferran Torres and Riyad Mahrez all dropping out. Phil Foden and Raheem Sterling will likely be the two wide men, who will cut in and create overloads in central areas, whereas Gabriel Jesus should lead the line for Manchester City against Wolves. 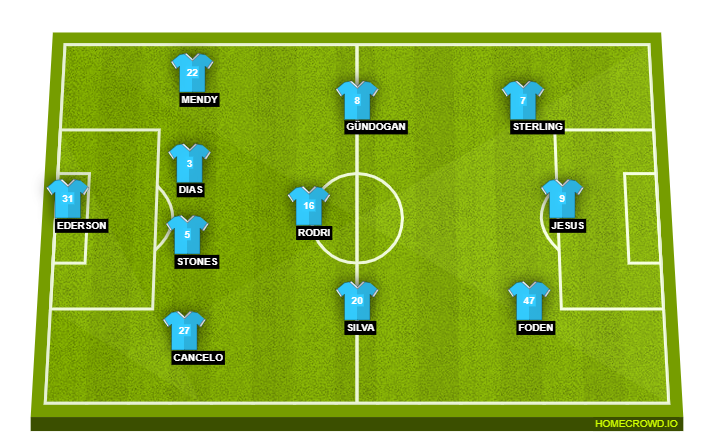 Like his counterpart in the Manchester City dugout, Nuno Espirito Santo does not have any new issues to contend with, although he does have a number of pressing concerns on his hands ahead of the trip to the Etihad. On Tuesday, the Wolves manager will have to make do without four first-team players.

Willy Boly (hamstring) and Daniel Podence (hip) are the players closest to sealing their return, with the duo expected to return within the next couple of weeks. Fernando Marcal (hip) and Raul Jimenez (head), though, are still some way off coming back and remain on the sidelines.

Podence’s absence, in particular, means Adama Traore gets a chance to impress, despite enduring a woeful 2020/21 campaign so far, wherein he is yet to directly contribute to a single goal. Wolves’ attack will be completed by Willian Jose and Pedro Neto, who will be the X-Factor for the visitors against Manchester City.

The midfielders, though, will hold the key if Wolves are to take anything from the game. To that end, Joao Moutinho and Ruben Neves will have to keep things tight in the middle of the park while looking to be precise and incisive with the ball at their feet. The midfield duo will provide cover to Leander Dendoncker, Conor Coady and Roman Saiss, while Nelson Semedo and Jonny will be the wing-back pairing. 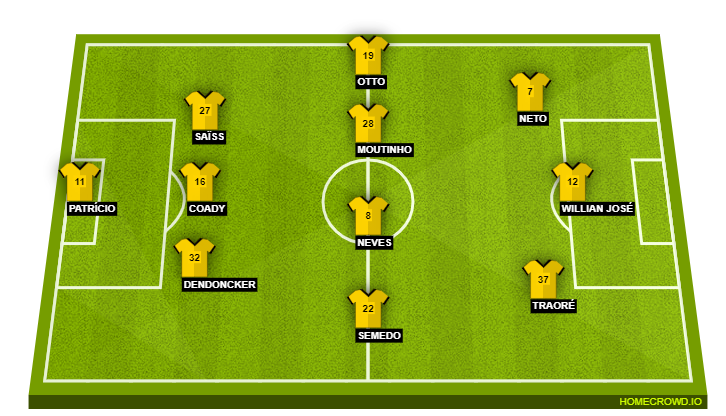 Kevin De Bruyne is back in the thick of action, so it goes without saying that the spotlight will be on him constantly, seeing as he is their marquee player. However, with Sergio Aguero now also being at Pep Guardiola’s disposal, the pressure is once again mounting on a certain Gabriel Jesus. 2020/21 has been yet another campaign that has seen the Brazilian striker blow hot and cold.

With Aguero back in action, though, Jesus has no room for error and has to take his opportunities whenever they present themselves, especially considering Manchester City have been linked with several big-name strikers over a summer move. Time could be running out for Jesus and it is imperative that he grabs his chances with both hands, starting with the game against Wolves.

Wolves might be currently enjoying a decent unbeaten run. However, on Tuesday, they are set to hit the brick wall named Manchester City. Pep Guardiola & co. are just not showing any signs of stopping and they are unlikely to be halted by their visitors this midweek, and with a 2-0 win, they should equal their club-record 28-game unbeaten run across all competitions.