You are here: Home » round-ups » AC Milan Player Ratings vs Spezia: 3/10 for dreadful Dalot; rest get 6 or lower
Football News 24/7

Spezia shocked AC Milan, as Le Aquile showcased an impressive attacking display in a 2-0 victory over the Serie A leaders.

AC Milan took a huge blow in their quest for the Serie A crown as they were comprehensively beaten by giant killers Spezia at the Alberto Piccolo Stadium. It was a tough day at the office for Stefano Pioli’s men, as they struggled to get out of their own half, mostly due to Spezia’s excellent high press resulting in poor passing. Milan failed to register a single shot on target in the game.

Spezia controlled the possession in the early exchanges of the first half and created a couple of chances, almost taking the lead in the 13th minute, when Riccardo Saponara’s shot was hit straight at Gianluigi Donnarumma. Right from the second half whistle, Vincenzo Italiano’s men continued to be on the front foot and deservedly took the lead in the 56th minute, when Giulio Maggiore tapped in from six yards after excellent work by Kevin Agudelo and Matteo Ricci in the Milan box.

Milan struggled to impose themselves over the game, whatsoever, and looked absolutely clueless in attack, with the substitutions having zero impact on the game.

Milan will rue at the missed opportunity to increase their lead over rivals Inter Milan, with the latter having the chance to go on top the table on Sunday, setting up an excellent Milan Derby in the coming weekend.

Let us take a look at how poorly Stefano Pioli’s men fared today.

Did not have much to do throughout the game and could not do much about the goals conceded, although he made a couple of good saves to deny the home side from scoring any more goals. Got no help from his teammates in the game.

Not a good display from Milan’s second choice right back. Constantly struggled against Saponara’s movement and skills and conceded the free kick that lead to the second goal in the 66th minute. Offered nothing in attack and regularly misplaced his passes in his own half that lead to more pressure on his team. 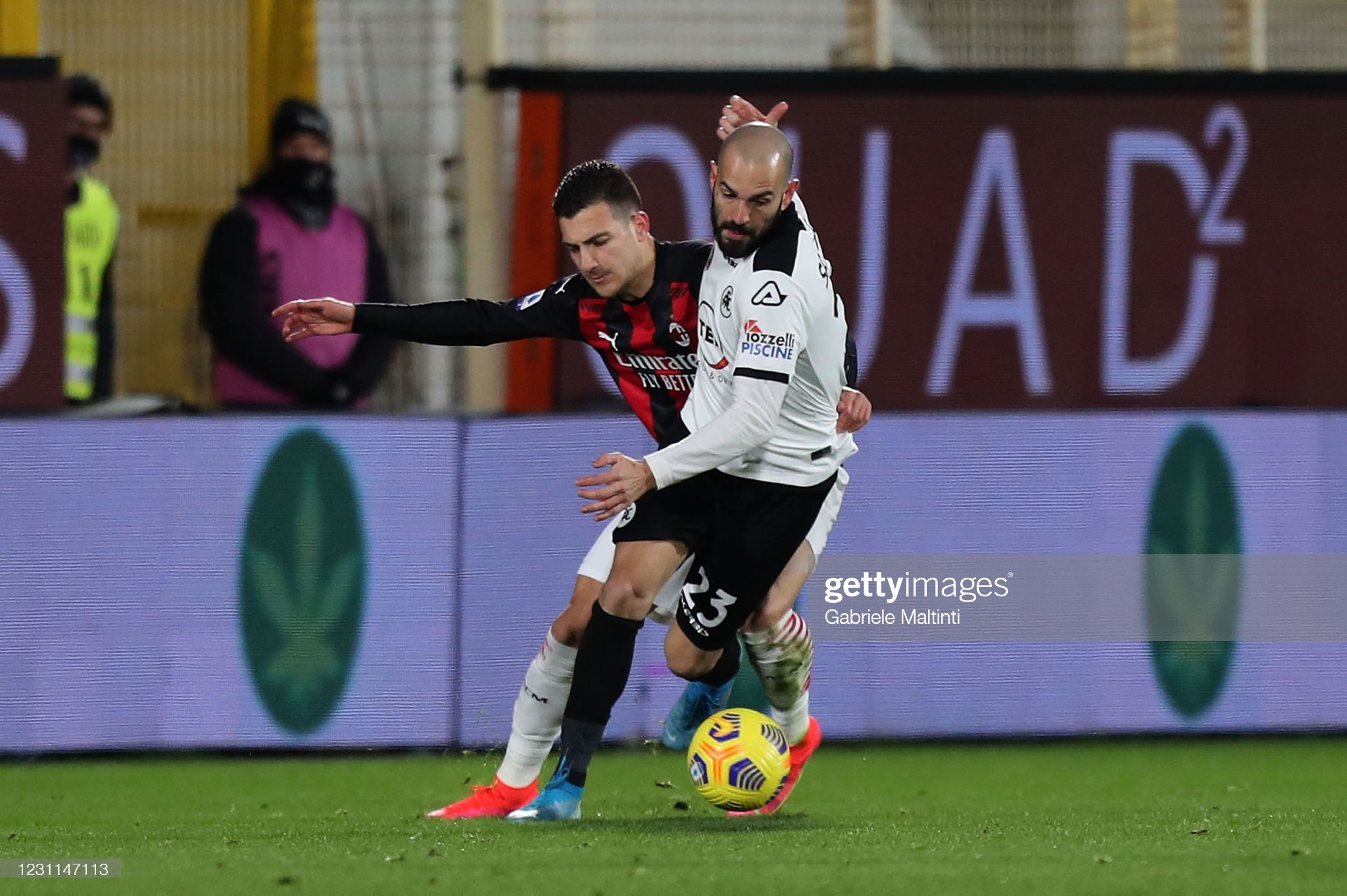 Milan’s captain struggled against Agudelo and misplaced several passes in the build-up. At fault for conceding the first goal, as it was his tackle on Ricci that lead to a tap in for Maggiore. He would not want to look back at this performance.

The Frenchman was pegged back in his own half during Spezia’s first half domination and could not play his usual attacking role as the hosts did not give him a chance to settle on the ball. Had a tough evening dealing with the pace and tenacity of Agudelo and Gyasi.

A passenger for most of the game, The Ivorian produced one of his worst displays in a Milan shirt. Perennially absent in midfield, he gave Spezia’s midfielders a lot of time on the ball and allowed them to dictate the tempo of the game.

Replaced Soualiho Meite in midfield, the ex-Arsenal midfielder looked completely off the pace and struggled to stamp his authority on the game. He did not receive any help from his midfield partner Kessie. Tried one long pass too many and was subbed off in the 64th minute by Meite.

Had a relatively quiet first half as he rarely got any time on the ball. Struggled to get going in the second half as Spezia upped the tempo. He was replaced by Samu Castillejo in the 83rd minute.

Not a performance we have come to expect from Milan’s midfield talisman. Lost possession cheaply multiple times and could not get his passing going throughout the game. A rare poor display from the Turkish wizard given his form in recent weeks.

An injury to Ante Rebic in the build up to this game led to Leao starting on the left side of the Milan attack, Looked lively initially in the first half, however, he struggled to control the long balls that were played towards him and his performance faded slowly. He was subbed by Mandzukic in the second half

Had an unusually slow start in the first half as he tried to assert himself on the game, but the Swede did not get any service from his midfielders. Spezia dealt with him with relative ease as he struggled to find his teammates with his hold up and link up plays.

Serie A leaders AC Milan are 2-0 down to 16th-placed Spezia 👀 pic.twitter.com/BuJ9ktl4ju

Came on for Bennacer in the 64th minute and he did not have any impact on the game. Barely got into the match as Spezia took control of the proceedings.

Tried to make things happen after coming on for Leao but couldn’t create any opportunities for his team.

Came on in place of Kjaer and he looked very assured in defence, as he made a few crucial blocks and won quite a few duels against the Spezia attackers.  Displayed calmness in his passing and was an assured presence at the back.

Replaced Saelemakers in the 83rd minute, barely had a touch of the ball.