Inter Milan will face a major test of their Serie A title credentials when they welcome Lazio to San Siro on Sunday.

Matchday 22 of the 2020/21 Serie A season is currently underway, as the table continues to take shape. As many as five matches are on show on Sunday, with the action on the day set to be concluded at San Siro, where Inter Milan will be playing hosts to Lazio.

Inter Milan have been quite impressive in the ongoing Serie A campaign, having gone toe to toe with local rivals AC Milan for the title while also staying clear of defending champions Juventus for a long time. However, the Nerazzurri have also disappointed with their tendency to slip-up in the crucial moments, which was once again prevalent in the Coppa Italia semi-finals, where Juventus got past them to reach the final.

Lazio, on the other hand, made a slow start to the 2020/21 season and were initially lagging behind in the top four race for a long time, although their performances in the UEFA Champions League has promised a lot. Their form in domestic football, though, has been on the rise as well since the turn of the year, with Simone Inzaghi’s men losing just once in nine game, with six wins and a draw in Serie A.

The reverse fixture, played at Stadio Olimpico back in October, saw Inter Milan and Lazio play out a 1-1 draw, with Lautaro Martinez and Sergej Milinkovic-Savic on target, while Ciro Immobile and Stefano Sensi saw red. Ahead of the latest meeting between the two sides, The Hard Tackle takes a closer look at the encounter.

Antonio Conte has a full strength squad at his disposal. (Photo by Marco Luzzani/Getty Images)

Antonio Conte does not have any fresh roster issues to contend with ahead of the visit of Lazio. In fact, on Sunday, the Inter Milan manager will have a fully fit squad at his disposal and he should name his strongest possible lineup, considering the Nerazzurri do not have any midweek fixture to look forward to.

In goal, there is no looking past Samir Handanovic, with Inter set to line up in a 3-5-2 formation in front of him. The three-man central defensive partnership pretty much picks itself, with Milan Skriniar, Stefan de Vrij and Alessandro Bastoni set to pair up at the back. Dutchman de Vrij will play the sweeper role and look to keep things organised around him.

Up ahead in midfield, Marcelo Brozovic will have a big role to play, with the Croat conducting play from the middle of the park. The creative impetus, though, will be provided by Nicolo Barella, who will be one of the men under the spotlight on Sunday. The final spot in midfield should be taken up by Arturo Vidal, who ought to get the nod over Roberto Gagliardini.

Ashley Young and Achraf Hakimi ought to be the two wing-backs, who will need to be clinical with their deliveries. Finally, Romelu Lukaku and Lautaro Martinez will form the strike partnership, with Alexis Sanchez being the backup attacking option. 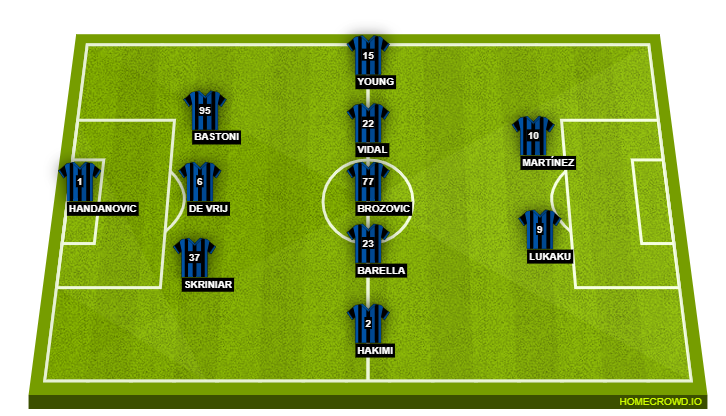 Unlike his counterpart in the Inter Milan dugout, Simone Inzaghi has a number of pressing injury concerns hampering his preparations ahead of the trip to San Siro. On Sunday, the Lazio manager could be without the services of as many as six first-team players.

The major concern has been pertaining to the fitness of Francesco Acerbi and Luis Alberto, both of whom pulled out of training earlier this week. However, it has been suggested that those were merely precautionary, with both the players set to feature against Inter Milan.

However, the likes of Thomas Strakosha (thigh), Silvio Proto (arm), Luiz Felipe (ankle) and Jean Daniel Akpa Akpro (muscle injury) will be unavailable to take the field this weekend. Inzaghi, though, has enough cover in his ranks to compensate for the absence of the quartet, with only Felipe realistically being a major absentee.

Pepe Reina is a certainty between the sticks, with Lazio being set up in a 3-5-2 formation that will mirror Inter Milan’s setup in many ways. In Felipe’s absence, the back three will feature Acerbi, Patric and Stefan Radu, with Acerbi being the defensive leader for the Biancocelesti.

In midfield, the defensive responsibility will rest on the shoulders of Lucas Leiva, with Alberto and Sergej Milinkovic-Savic providing the forward thrust. Out wide, Manuel Lazzari and Adam Marusic will hold the key with their deliveries, with the duo being in fine touch lately. Finally, the strike partnership should be formed by Joaquin Correa and talisman Ciro Immobile. 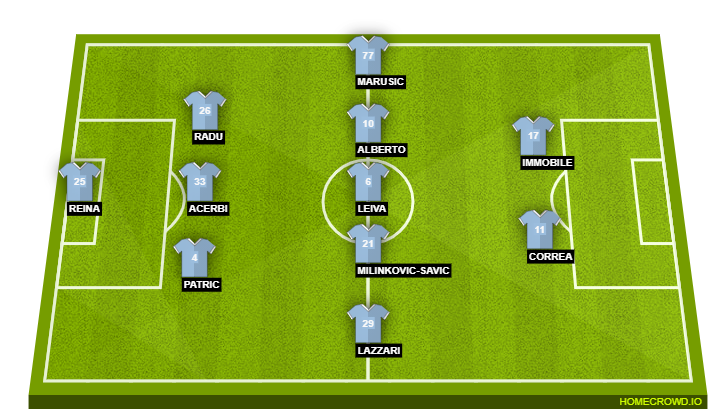 Ciro Immobile will always have the spotlight on him in the games he features in while the likes of Nicolo Barella, Sergej Milinkovic-Savic and Francesco Acerbi will be key figures as well. However, the player who takes the cake in this section is Romelu Lukaku.

The Belgian striker has been the go-to player for Antonio Conte ever since he arrived at San Siro from Manchester United in the summer of 2019. Lukaku is indeed the great hope for Inter Milan as well, if they are to win the Scudetto this season.

However, he is on a bit of a dry run, having scored in just one of the last six games he has played. With the rest of the Inter Milan players not being nearly as prolific as him, Lukaku will need to be at his best if the hosts are to continue their charge for the Serie A title, especially with Juventus, who play Napoli on Saturday, lurking close behind. A big game for Lukaku.

This is one of those games wherein the two sides are so hard to separate. Inter Milan have blown hot and old to some extent in recent weeks, although they have been in fine form in the Serie A. The same goes for Lazio, who have been quite irresistible since the turn of the year and do not look like a side that can be beaten right now.

With that in mind, it is likely that this game will end all square, with neither Inter Milan nor Lazio being too happy with the result. With AC Milan set to play the lowly Spezia on Saturday, the gap to the top could well be increased by the time Inter Milan even take the field. Nevertheless, we are going with a 1-1 draw between Inter and Lazio on Sunday.