The FA Cup fifth round is underway and the action continues on Wednesday, with as many as four matches on show on the day. The action on the day begins at the Liberty Stadium, where Swansea City will play hosts to Manchester City, aiming to reach the quarter-finals of the competition.

Swansea City have been in fine touch in the ongoing campaign, with a return to the Premier League highly possible. The Swans are currently just two points off the top of the table and are presently a run of ten games without defeat across all competitions. Steve Cooper’s men reached the FA Cup fifth round on the back of comfortable wins over Stevenage and Nottingham Forest.

Manchester City, on the other hand, opened their FA Cup campaign with a straightforward 3-0 win over Birmingham City before battling hard to overcome Cheltenham Town 3-1 in the fourth round. The Citizens are on a fine run of form right now, with their last defeat coming in November last year, with their scintillating run taking them to the top of the Premier League table as well.

Swansea City and Manchester City last went head-to-head in the FA Cup two years ago, with Pep Guardiola & co. coming from behind to win 3-2 en route to winning the tournament that year. Ahead of the latest meeting between the two sides, The Hard Tackle takes a closer look at the encounter.

Steve Cooper does not have any fresh injury concerns hampering his preparations ahead of the visit of Manchester City. On Wednesday, the Swansea City manager will be bereft of the services of three first-team players due to various fitness issues.

Korey Smith, Liam Cullen and Steven Benda all continue to be sidelined for the Swans, but Cooper has enough depth in his ranks to cover for the absence of the aforementioned trio. Freddie Woodman, on loan from Newcastle United, should take his place in goal, with Swansea set to line up in Cooper’s trademark 3-5-2 system. Cooper should name a strong side so as to progress to the next round.

Kyle Naughton has reinvented himself as a centre-back, playing a similar role as the one Kyle Walker essayed when named in a back three for England. Naughton will join Ben Cabango and Marc Guehi in the three-man central defensive unit, with the trio remaining compact when Manchester City take the game to them.

The wing-backs will, in turn, drop back in the defensive phase to create a 5-3-2 formation, with the central midfielders looking to keep things tight in the middle. Conor Hourihane is the in-form player for Swansea, but here, the Aston Villa loanee will play the Anchor Man role, while receiving defensive support from Yan Dhanda and captain Matt Grimes.

Grimes and Dhanda will also look to initiate swift transitions to push Swansea forward effectively. Upfront, Andre Ayew and Jamal Lowe will form the strike partnership, with the latter playing off of the Ghanaian striker. 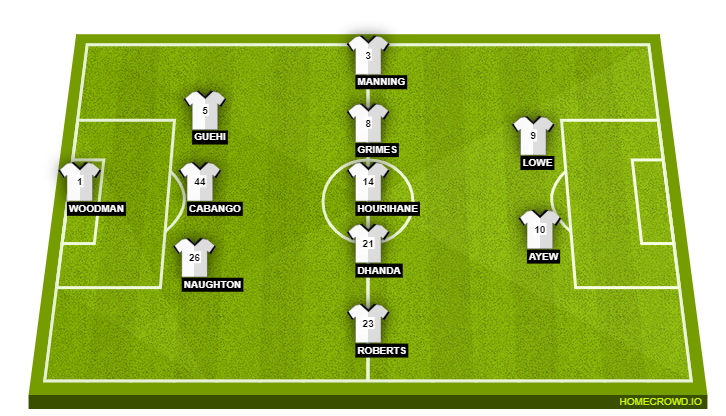 Pep Guardiola has received a boost on the team news front ahead of the trip to the Liberty Stadium to take on Swansea City. On Wednesday, the Manchester City manager will have to make do without just three first-team players.

The major absentee for the visitors remains Kevin De Bruyne, who is recovering from a hamstring injury. Sergio Aguero and Nathan Ake continue to be sidelined as well, with the former battling to regain fitness ahead of the second half of the season. The good news, though, comes in the form of Kyle Walker’s return.

Walker should slot into the Manchester City starting lineup straightaway, taking his spot on the right side of the defence, with Benjamin Mendy coming in as the left-back. At the heart of the Manchester City defence, Eric Garcia should pair up with Aymeric Laporte, while Zack Steffen will take his customary place between the sticks for cup competitions.

Up ahead in midfield, with Manchester City set to line up in a 4-2-3-1 formation, Tommy Doyle will get a chance to impress, pairing up with Fernandinho in the double pivot. Riyad Mahrez and Bernardo Silva ought to retain their places in the side, with Silva reprising the no. 10 role this time out. Ferran Torres and Gabriel Jesus, though, should come in, looking to nail down their spot in the side. 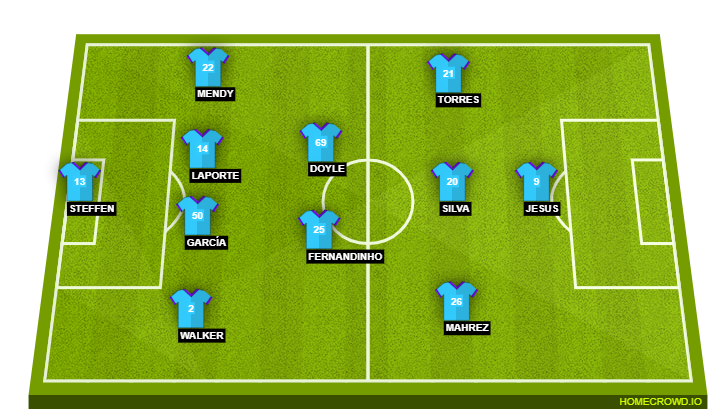 In what has been a season wherein Manchester City have gradually grown in stature to become the most in-form team in all of Europe, it is the output of the strikers that has been one of the few down points for them. While Sergio Aguero has mostly been unavailable, Gabriel Jesus has flattered to deceive at times with his inconsistencies.

With Aguero still some way off regaining fitness, Jesus will not get a better opportunity to nail down his spot as the regular option to lead the line for Manchester City. Amid Phil Foden’s emergence in the false nine role, Jesus needs to deliver against Swansea City, otherwise, he runs the risk of falling down the pecking order further when Aguero returns.

This is unlikely to be a walk in the park for Manchester City. Swansea City are currently on a fine run of form and have been quite solid at home. However, City’s form is irresistible at the moment and despite the fact that Pep Guardiola could rotate in the FA Cup again, his side will have enough quality to get over the line. The Hard Tackle predicts a 2-1 win for Manchester City.