Barcelona will be eager to take a step closer to the Copa del Rey final when they take on Sevilla in the semi-final first leg on Wednesday.

The games continue to come thick and fast all across Europe and in Spain, the Copa del Rey semi-finals are set to begin this midweek. Record 30-time champions Barcelona will be in action on Wednesday night, when they travel to the Ramon Sanchez Pizjuan Stadium to take on Sevilla in the first leg tie.

Sevilla entered the Copa del Rey in the very first round, beating Ciudad de Lucena 3-0 before wins over Linares Deportivo, Leganes, Valencia and Almeria sent them on their way to the semi-finals. Los Nervionenses are currently on a seven-game winning run which includes a 3-0 win over Getafe this past weekend, also elevating them to fourth on the La Liga table.

Barcelona, like their hosts, are on a fine run of form at present, having won each of their last six games across all competitions. While the Blaugrana have not always been entirely convincing, their resilience has been impressive, to say the least. As far as the Copa del Rey is concerned, Ronald Koeman & co. began their campaign in the Round of 32 and have beaten Cornella, Rayo Vallecano and Granada en route to the semi-finals.

Sevilla and Barcelona have already locked horns once this season, with the two sides playing out a 1-1 draw at Camp Nou back in October; Luuk de Jong and Philippe Coutinho were on target for the teams. Ahead of the latest meeting between the two sides, The Hard Tackle takes a closer look at the encounter.

Julen Lopetegui has a fresh injury concern hampering his preparations ahead of the visit of Barcelona. On Wednesday, the Sevilla manager will be bereft of the services of four first-team players due to various fitness issues.

Lucas Ocampos is the fresh absentee for Sevilla, having picked up an ankle injury last time out against Getafe. In addition, Lopetegui is also missing the likes of captain Jesus Navas (hip), Marcos Acuna (hamstring) and Oscar Rodriguez (hamstring), with the manager definitively ruling Navas out of the game versus Barcelona.

In the absence of Navas, former Barcelona man Aleix Vidal is a certainty in the right-back slot, with Karim Rekik likely to get the nod on the left flank. At the heart of the Sevilla defence, the indomitable partnership of Jules Kounde and Diego Carlos ought to continue, with Bono picking himself in goal.

Up ahead in midfield, the key man for Sevilla will be former Barcelona midfielder Ivan Rakitic, who will aim to provide the forward thrust from midfield while also giving defensive support to Fernando. Joan Jordan will be the workhorse in the middle of the park, thereby completing the three-pronged unit.

Finally, in attack, the man to replace the injured Ocampos ought to be Munir El Haddadi, with the former Barcelona striker taking his place on the left-wing. On the opposite flank, Suso is a certain starter, with top scorer Youssef En-Nesyri leading the line for Sevilla. 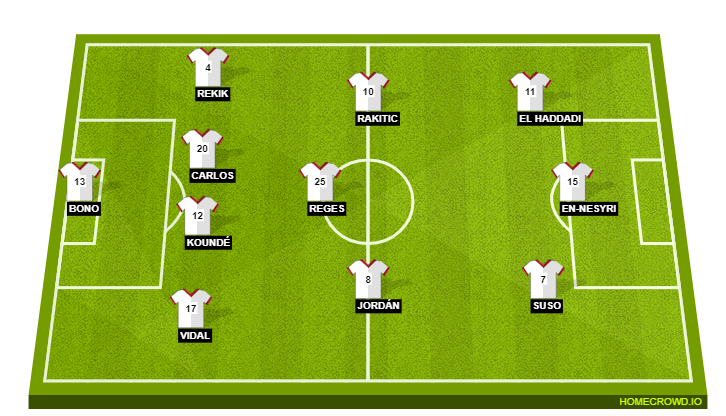 Like his counterpart in the Sevilla dugout, Ronald Koeman has quite a few pressing fitness issues to contend with ahead of the trip to the Ramon Sanchez Pizjuan Stadium. On Wednesday, the Barcelona manager will have to make do without as many as seven first-team players.

Ronald Araujo sustained an ankle injury early in the game against Real Betis last time out and has missed out on the travelling squad as a result. Araujo has joined the likes of Gerard Pique, Sergino Dest, Sergi Roberto, Miralem Pjanic, Philippe Coutinho and Ansu Fati on the sidelines.

The absence of Dest and Roberto means that Oscar Mingueza becomes an automatic pick in the right-back berth. With Mingueza starting as a right-back, Samuel Umtiti and Clement Lenglet select themselves at the heart of the Barcelona defence, seeing as Koeman has no other senior centre-backs at his disposal.

Jordi Alba should feature on the left side of the backline, with the Barcelona manager expected to name a strong starting lineup, just as he did against Granada last time out. That means Marc-Andre ter Stegen is a certainty between the sticks for the Blaugrana.

Up ahead in midfield, Pjanic’s absence means Sergio Busquets will sit at the base of the three-man unit. Frenkie de Jong and Pedri will provide company to the veteran Spanish midfielder in the middle of the park, with the duo providing the creative impetus.

Finally, in attack, the front trio should comprise of Ousmane Dembele, Lionel Messi and Antoine Griezmann. Messi will often drop deep to link up with de Jong and Pedri, thereby creating space for Dembele and Griezmann to bomb into the central areas and look for scoring positions. 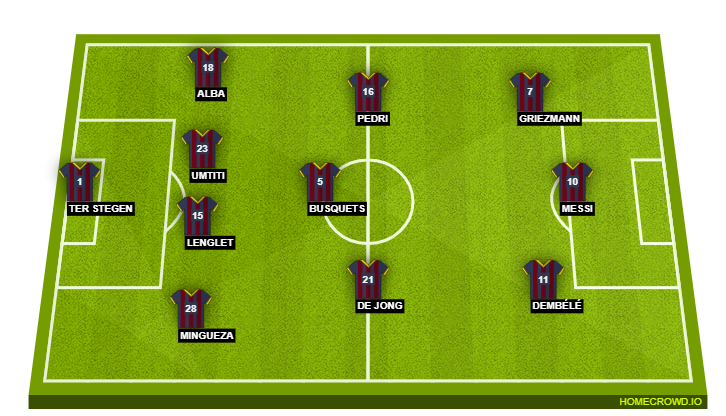 It is no secret that Griezmann has not exactly set the house on fire on a consistent basis over the course of his Barcelona stint. After a sub-par maiden campaign with the Catalan giants, the French superstar had to step up in 2020/21 if he was to continue his stint at Camp Nou. Slowly but surely, Griezmann has ended up doing exactly that.

His best performance yet in a Barcelona shirt came last week when they came from behind to beat Granada 5-3, with Griezmann directly involved in four of those strikes. With Barcelona aiming to get their winning habit back and add to their record haul in the Copa del Rey, Griezmann will need to step up again and continue to support Lionel Messi ably, especially with the next opponents being the tricky Sevilla side.

This is a game that ought to go right down the wire. In fact, this is a semi-final tie that will, in all likelihood, go down till the final moments when the second leg is played next month. Indeed, with both the teams being in fine touch, there should be very little to separate the two sides.

With each side missing some key players, both the goalkeepers should be kept busy over the course of the game. In the end, though, there should be very little to separate Sevilla and Barcelona, with the teams playing out a third successive draw to set up an intriguing second leg tie at Camp Nou next month.