A spot in the quarter-final will be up for grabs as Leicester City host Brighton & Hove Albion in the fifth round of the FA Cup.

This midweek brings us an exciting FA Cup fifth-round fixture between two Premier League teams when hosts Leicester City take on in form Brighton & Hove Albion at the King Power Stadium on Wednesday. The winner will seal their place in the quarter-final of the cup competition.

With only one win in their last four Premier League games, Leicester sit seven points behind leaders Manchester City in third place. Even the return of Jamie Vardy could not inspire the Foxes to a victory against Wolves as they fired a blank draw at the Molineux. As far as the FA Cup is concerned, Brendan Rodgers’ side eased past Stoke City and Brentford to reach the fifth round.

Brighton have been in impressive form in the recent weeks and are unbeaten in their last six games. The Seagulls saw of Newport County on penalties in the FA Cup third round before beating Blackpool in the previous stage. With 2 big wins against Liverpool and Tottenham to their name in recent weeks, they will be very confident of reaching the quarter-finals given their current form.

Ahead of the FA Cup fifth round between Leicester and Brighton at the King Power Stadium, let us take a closer look at the two sides.

Brendan Rodgers will be happy to have his premier goalscorer, Jamie Vardy back in the setup. However, Leicester will be without two of their star defenders in Wesley Fofana and Timothy Castagne, both of whom have been quite influential for the Foxes this season.

So we can expect a back four of Ricardo Pereira, Jonny Evans, Caglar Soyuncu and James Justin once again on Wednesday. In midfield, the Foxes will be without midfielder Dennis Praet, while Brendan Rodgers is also sweating over the fitness of Wilfred Ndidi for this game.

Nampalys Mendy and Youri Tielemans ought to form the midfield double pivot, and the in-form James Maddison taking up the No. 10 slot.

Rodgers would continue to employ 4-2-3-1 formation that has brought him a lot of success in the league, with Pereira and Justin providing the width from the wings and Maddison providing the creative spark from the middle of the park while Vardy provides the constant goal-threat up front.

Although the return of their leading goalscorer will be a really big boost to the team and could help them turnaround their current poor form, Leicester will be facing a team high on confidence and belief from their recent run of games. 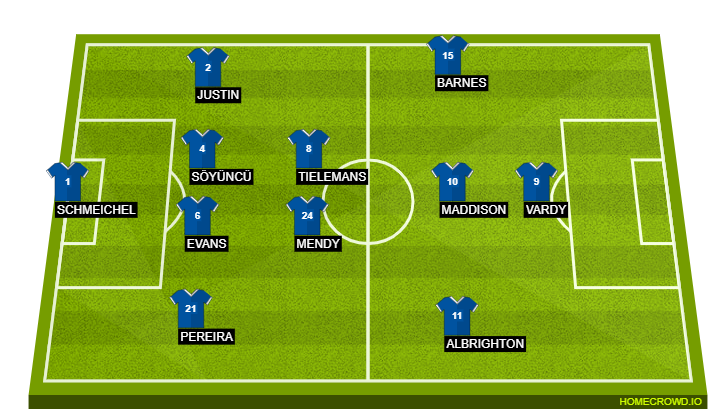 Brighton could be without defender Adam Webster who was substituted in the Burnley game due to an ankle injury. They will also be without long-term absentees in Tariq Lamptey and Solly March while Alireza Jehanbaksh and Jason Steele will have late fitness tests to determine their availability.

Potter was boosted by the return of Danny Welbeck, Joel Veltman and Alexis Mac Allister all of whom featured in the draw against Burnley. We can expect Potter to continue with the 3-4-1-2 formation that has brought him good success in the recent run of games, with Veltman expected to continue his stint at right wing-back.

In the absence of Webster, Dan Burn could feature in the back three alongside Ben White and Lewis Dunk. Graham Potter could be tempted to hand Michal Karbownik his debut game on the left-hand side.

Yves Bissouma will play alongside Steven Alzate and Adam Lallana in midfield. Bissouma will continue to play the anchorman role while the attack-minded midfielders Lallana and Alzate will look to drive the team forward when on the ball.

Upfront Welbeck is expected to start and he will play alongside Leandro Trossard. We can expect Welbeck to inject pace and power to the attack and Trossard to continue displaying his fine form for the seagulls.

With nine goals and ten assists in all competitions to his name, James Maddison will be the biggest threat that Brighton will have to keep a close eye on. The England international scored and assisted one goal apiece in Leicester’s fourth-round FA Cup victory over Brentford.

The 24-year-old could be the creative spark that can break down this resilient Brighton defense and take his team to the quarter-finals of the FA Cup. Yves Bissouma will have his hands full in keeping Maddison quiet on the night.

Yet to get their names etched in the history books of this prestigious trophy, Leicester and Brighton will look forward to getting into the quarter-finals and try to get their hands on this trophy for the first time. Leicester have been a force to reckon with in the Premier League this season would probably be favourites to win this game.

However, Brighton’s form in the last few games would suggest that they are going to be a tough opponent to get past. Even though Brighton have shown some splendid form in recent weeks especially against big teams in the Premier League, the return of Jamie Vardy and the form of Maddison should be enough for the Foxes to seal their spot in the quarter-final of this competition. We predict a 2-1 win for Leicester.