Real Madrid will hope to build on their win this past weekend when they welcome Getafe to the Alfredo Di Stefano Stadium on Tuesday.

The games continue to come thick and fast across Europe and in Spain, there are plenty of midweek games on offer. Reigning La Liga champions Real Madrid will take the field on Tuesday, seeing as they are no longer in the Copa del Rey, which gives them the chance to play their postponed fixture from the opening matchday against Getafe at the Alfredo Di Stefano Stadium.

Real Madrid have stuttered in the defence of their La Liga crown, having already dropped points an astounding eight times in 21 games. Such inconsistencies have meant that Los Blancos are lagging behind neighbours and league leaders Atletico Madrid, who are seven points ahead with a couple of games in hand. Zinedine Zidane’s men, though, returned to winning ways this past weekend with a 2-1 win at Huesca.

Getafe, on the other hand, have endured a dip in their levels this term as well. Having established themselves as top six hopefuls in each of the last two seasons, the Azulones have been well off those standards so far in the ongoing campaign. In fact, Jose Bordalas & co. have managed to win just six games till date, which means they are 13th with 24 points on the board, just four points outside the drop zone.

The corresponding fixture last season saw Real Madrid eke out a narrow 1-0 win, courtesy a Sergio Ramos penalty in the 79th minute. Ahead of the latest meeting between the two sides, The Hard Tackle takes a closer look at the encounter.

Zinedine Zidane and his squad continues to be ravaged by numerous fitness concerns ahead of the visit of Getafe. On Tuesday, the Real Madrid manager will be bereft of the services of as many as nine first-team players.

Eder Militao would have been available again after having served a one-match suspension last time out. The Brazilian, though, is out due to an injury, meaning Nacho will continue to accompany Raphael Varane, who was excellent against Huesca, at the heart of the Real Madrid defence.

As for the lengthy list of absentees, the likes of Sergio Ramos, Dani Carvajal, Alvaro Odriozola, Fede Valverde, Eden Hazard, Lucas Vazquez and Rodrygo Goes had already been on the sidelines and they have all now been joined by Toni Kroos as being unavailable to take on Getafe, thereby leaving Zidane on his bare-bones.

In defence, the Real Madrid manager has no choice but to deploy Ferland Mendy as the right-back, with Marcelo now becoming a certainty on the left flank. It was mooted that Marcelo could instead be an option in midfield in the absence of Kroos, but it is being suggested that Antonio Blanco could now make his debut, sitting in the middle alongside Casemiro and Luka Modric.

Finally, in attack, Karim Benzema is the obvious pick to lead the line for Real Madrid against Getafe. The French striker will have Vinicius Jr. and Marco Asensio for company again in the final third, seeing as Zidane’s options in attack are also wearing thin. 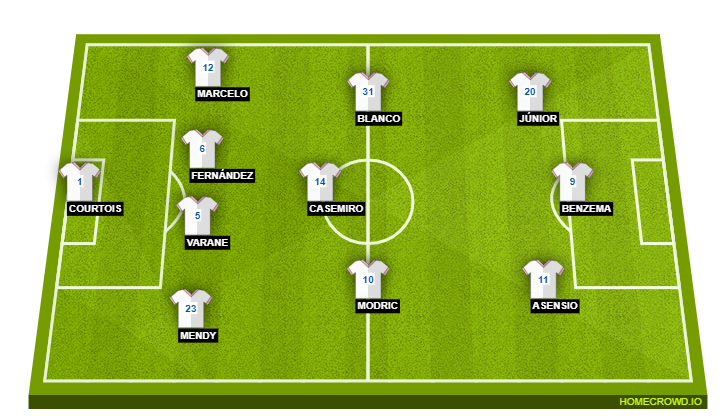 Unlike his counterpart in the Real Madrid dugout, Jose Bordalas barely has any pressing issues to contend with ahead of the trip to the Alfredo Di Stefano Stadium. On Tuesday, the Getafe manager will only have to make do without two first-team players.

Dario Poveda is still unavailable due to a minor injury, while the major absentee for Getafe will be star defender Djene Dakonam, who misses out due to a one-match suspension, incurred after being sent off last time out against Sevilla. In his stead, Erick Cabaco should start at the heart of the Getafe defence, with Soufiane Chakla being his partner.

The visitors should line up in a 4-4-1-1 formation again, despite Bordalas experimenting with a 3-4-3 in recent games. Ruben Yanez will be stationed between the sticks while Damian Suarez and Allan Nyom ought to be the two full-backs for Getafe against Real Madrid.

Up ahead in midfield, the onus will be on Nemanja Maksimovic and Mauro Arambarri, available again after serving out his suspension, to keep things tight and deny Luka Modric any room to be at his creative best.

Cucho Hernandez and Marc Cucurella will be the two wide midfielders, who will be in charge of providing the width in the final third while providing defensive support to the full-backs. The creative thrust will come from Carles Alena, with Jaime Mata leading the line for Getafe against Real Madrid. 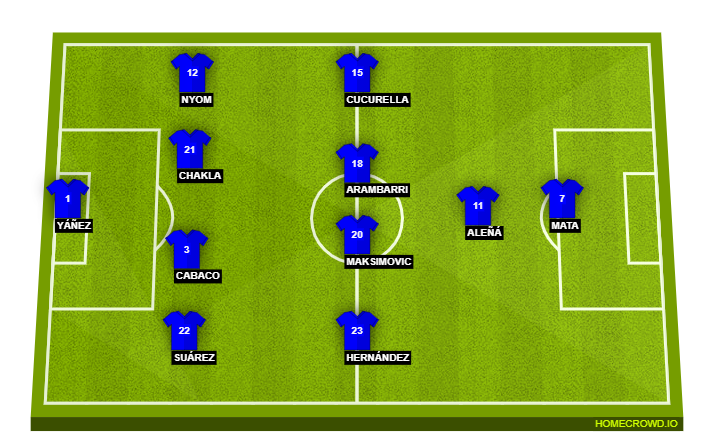 With Zinedine Zidane’s options wearing thinner by every passing game, the importance of one ever-present player just continues to rise. Real Madrid barely have any game-changers left in the squad, which makes one Karim Benzema more pivotal than he ever has been during his spell with Los Blancos.

Leading the line for Real Madrid with his usual spunk, this time around, Benzema will need to support Luka Modric even more during the build-up phases before then turning up inside the Getafe box looking for scoring opportunities. Failure to do so could result in another shock winless result for Real Madrid, one Zidane will be desperate to avoid.

Getafe have been one of the poorest attacking sides in La Liga this season, meaning that despite the fact that Real Madrid will have a makeshift backline being set up on Tuesday, the visitors are unlikely to trouble them much. On the opposite end, Los Blancos might find it difficult to unshackle themselves but should ride on the brilliance of Karim Benzema to eke out a narrow 1-0 win.