A place in the FA Cup quarter-finals will be on the line when Manchester United welcome West Ham United to Old Trafford on Tuesday.

The games continue to come at an electric pace across Europe and in England, the FA Cup returns for a rare midweek round of fixtures. The fifth round indeed gets underway this week and at Old Trafford, Manchester United will be playing hosts to West Ham United on Tuesday night, with the two teams vying for a place in the quarter-finals.

Manchester United have enjoyed a memorable 2020/21 campaign till date, having established themselves as potential title contenders in the Premier League while also enjoying a run deep into the Carabao Cup. In the FA Cup, Ole Gunnar Solskjaer & co. have beaten Watford and Liverpool so far, with both the wins seeing them edge their opponents by the odd goal.

West Ham United, like their hosts, have been quite impressive in the ongoing campaign. To the surprise of many, the Hammers have gone toe to toe with the biggest teams in the country and are currently just a point outside the top four. In the FA Cup, David Moyes & co. are yet to concede a goal, having beaten Stockport County 1-0 before cruising to a 4-0 win over Doncaster Rovers last time out.

Manchester United and West Ham have already locked horns once this term, with the Red Devils coming from behind to record a 3-1 win at the London Stadium back in December. Ahead of the latest meeting between the two sides, The Hard Tackle takes a closer look at the encounter.

Paul Pogba misses out due to a thigh injury. (Photo by Catherine Ivill/Getty Images)

Ole Gunnar Solskjaer has one pressing injury concern hampering his preparations ahead of the visit of West Ham United. On Tuesday, the Manchester United manager could be bereft of the services of as many as three first-team players.

While Phil Jones is a long-term absentee due to a knee injury, Eric Bailly remains a doubt as he continues his bid to shrug off a knock. The major absentee for Manchester United, though, will be Paul Pogba, who sustained a thigh injury in the first half against Everton this past weekend. The Frenchman is set to miss at least a couple of weeks of action, as a result.

In Pogba’s absence, Fred and Scott McTominay are expected to pair up in the midfield double pivot, with Nemanja Matic likely to miss out again. The duo will form a defence-oriented midfield combination, with their presence enabling the attacking quartet to express themselves with a lot of freedom.

Speaking of the attack, Solskjaer is likely to make one change, with Marcus Rashford making way for Anthony Martial. The English international has been well off his best lately and could perhaps, do with a breather. Edinson Cavani, though, should lead the line for Manchester United against West Ham, having been impressive last time out versus Everton.

Bruno Fernandes should also retain his spot in the side, with any rest likely to be afforded next week when the UEFA Europa League Round of 32 commences. The final spot in attack will likely be taken up by Mason Greenwood, who will look to be direct in his approach from the right flank.

Finally, in defence, Solskjaer should make another change, with Luke Shaw being given a breather. In his stead, Alex Telles should get a rare opportunity to impress, with the Brazilian posing a threat with his deliveries from set-pieces. Harry Maguire and Victor Lindelof will start at the heart of the Manchester United defence, with Aaron Wan-Bissaka being the right-back again. In goal, Dean Henderson ought to replace David de Gea. 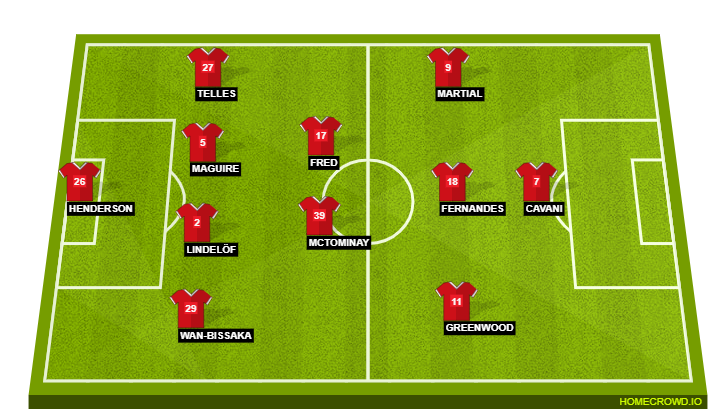 Unlike his counterpart in the Manchester United dugout, David Moyes does not have any fresh fitness issues to contend with ahead of the trip to Old Trafford. On Tuesday, the West Ham United manager will have to make do without just two first-team players.

Arthur Masuaku remains a long-term absentee due to a knee injury, although he has taken steps in his rehabilitation to mount his return. The other absentee is Darren Randolph, who is recovering from a knock. The former Manchester United manager, though, is sweating over the fitness of Michail Antonio, who is battling fatigue.

It is unlikely that Antonio will spearhead the West Ham attack against Manchester United, with Andriy Yarmolenko, who has reinvented himself as a striker this season, starting in his stead. Meanwhile, Jesse Lingard is ineligible to face parent club Manchester United, meaning Manuel Lanzini could be handed a rare start in the no. 10 berth.

Out wide, the chief creative outlets for West Ham will be Jarrod Bowen and Said Benrahma, with Pablo Fornals being an option on the bench. As for the midfield, there is some major good news, with Tomas Soucek’s red card being rescinded by the FA. The Czech midfielder should, therefore, be retained in the midfield double pivot alongside Declan Rice.

At the back, there should be a few alterations, with Ryan Fredericks coming in for Vladimir Coufal for a rare start. Issa Diop could be handed a place at the heart of the West Ham defence, where he should accompany Craig Dawson. Aaron Cresswell, though, is a certainty and will be a big factor, especially in set-piece situations. Finally, Lukasz Fabianski picks himself in goal. 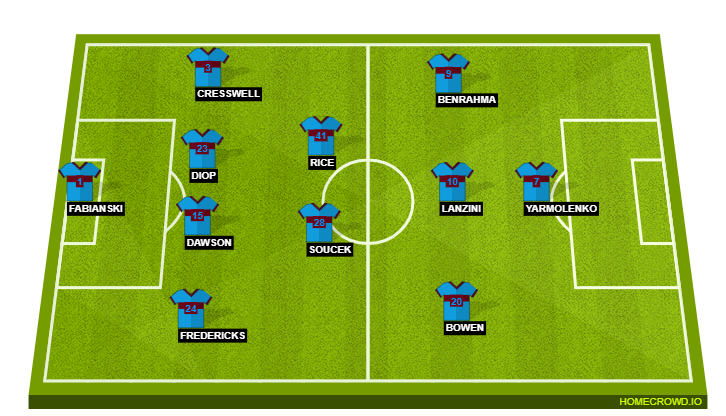 Dean Henderson has not exactly been a happy camper since returning from his loan spell with Sheffield United. No longer a first-choice goalkeeper, the Englishman has had to bide his time at Manchester United, having played second-fiddle to David de Gea.

Now, though, an opportunity could well be opening up for Henderson, especially in the wake of a calamitous display by de Gea against Everton. Reports have suggested that the Spaniard’s spot might not be secure anymore and so, Tuesday’s FA Cup tie against West Ham United presents a golden opportunity for Henderson.

If he can manage to impress the Manchester United manager in this game, he could well be making a case for more regular inclusion in the Premier League as well. A big game is upon Henderson and it is imperative he grabs his chance with both hands.

West Ham United might not have a record to boast, as far as their efforts at Old Trafford are concerned. However, as they have shown this season, the Hammers are certainly no pushovers. On top of that, Manchester United have been quite unimpressive for the most part at home this term, which is why David Moyes might be sensing an opportunity against his former employers.

In fact, it will hardly be surprising if West Ham land the opening blow in this game. Having said that, as we have seen many-a-time so far this term, Manchester United revel in making comebacks and this should be another one in a long list of big wins wherein they come from behind to seal the deal. The Hard Tackle, to that end, predicts a 2-1 win for Ole Gunnar Solskjaer & co.