Chelsea will hope to continue their unbeaten start to life under Thomas Tuchel when they take on Sheffield United at Bramall Lane on Sunday.

The action continues to hit us at a relentless pace and Gameweek 23 of the 2020/21 Premier League season will continue into Sunday. The action on the day will culminate in West Yorkshire, where Sheffield United will play hosts to Chelsea at Bramall Lane, with both teams desperate to get all three points.

Sheffield United remain rooted to the bottom of the Premier League table, but have made definitive improvements in recent weeks, narrowing the gap to safety. The Blades have won just three games all season, although each of those victories have come in their last five. At the same time, Chris Wilder’s men have become a difficult side to beat, as evidenced in their recent 1-0 loss to Manchester City.

Chelsea, on the other hand, have begun life under the tutelage of Thomas Tuchel on a strong note. While the Blues have not looked the menacing side they have the potential to be, they do appear to have shored up the defensive side of things and are, in fact, yet to concede a goal in three outings under the German. Two wins in those fixtures, though, signals a step in the right direction.

The reverse fixture, played at Stamford Bridge in November, saw Chelsea come from behind to beat Sheffield United 4-1, with Tammy Abraham, Ben Chilwell, Thiago Silva and Timo Werner on target for the Blues. Ahead of the latest meeting between the two sides, The Hard Tackle takes a closer look at the encounter.

“Ben Osborn returned to full training today so he’ll be available for the weekend. We’re looking at Enda and hopefully he’ll be involved as well.

There’s a couple of little issues but nothing major.” pic.twitter.com/wU0JhYvdl5

Chris Wilder has a number of pressing injury concerns hampering his preparations ahead of the visit of Chelsea. On Sunday, the Sheffield United manager could be bereft of the services of as many as five first-team players, with defence, in particular, posing a major concern.

The likes of Jack O’Connell, Jack Robinson and Sander Berge are definitely out, while Enda Stevens and George Baldock face late fitness tests to determine their availability. The duo, though, might not be risked, especially with Ben Osborn available again after recovering from a calf strain.

In some more bad news, though, Ethan Ampadu is also unavailable due to his ineligibility to take on parent club Chelsea. With Wilder essentially down to his bare-bones in the defensive unit, Chris Basham, John Egan and Phil Jagielka pick themselves in the three-man central defensive unit, while Jayden Bogle and Osborn will be the two wing-backs.

Sheffield United will, for the umpteenth time, line up in Wilder’s trademark 3-5-2 formation, with the centre-backs being given the license to overlap. Meanwhile, the wing-backs will carry a threat with their deliveries from the flanks, bringing imposing strikers David McGoldrick and Billy Sharp into the picture.

In midfield, Oliver Norwood will play the Anchor Man role, looking to provide cover to the defence while also making ground if a centre-back is out of position. The box-to-box midfielders John Lundstram and John Fleck will threaten with their late runs into the Chelsea box while remaining behind the ball in the defensive phase. 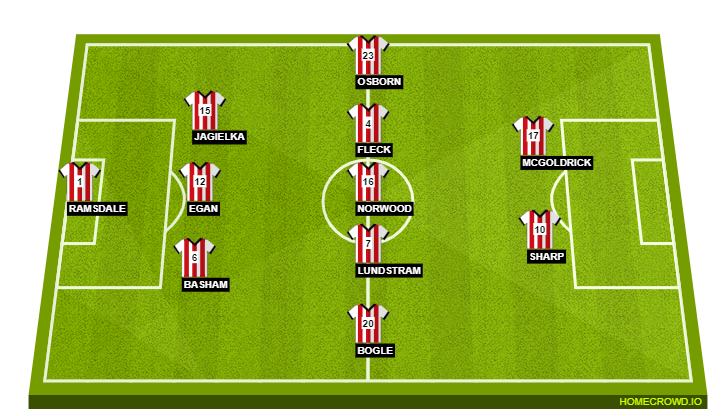 Much like his counterpart in the Sheffield United dugout, Thomas Tuchel has a major fitness issue to contend with ahead of the trip to Bramall Lane. On Sunday, the Chelsea manager might have to make do without as many as three first-team players.

Kurt Zouma and Kai Havertz had already been struggling to overcome their respective knocks and could miss out again. In addition, Thiago Silva is a fresh absentee for Chelsea, having sustained a thigh injury last time out against Tottenham Hotspur. The veteran Brazilian defender is now out for an indefinite period.

In Silva’s absence, Andreas Christensen is certain to start in the three-man central defensive unit, with Chelsea expected to be set up in a 3-4-2-1 formation once again. Christensen becomes an automatic pick seeing as Zouma is also sidelined, while Fikayo Tomori is no longer at the club. The Dane will partner Cesar Azpilicueta and Antonio Rudiger at the back, with Edouard Mendy in goal.

Up ahead in midfield, Jorginho and Mateo Kovacic pick themselves after solid performances in the midweek fixture, meaning N’Golo Kante misses out again. Out wide, Callum Hudson-Odoi and Marcos Alonso have been among the beneficiaries of Tuchel’s appointment and the duo should start as the two Chelsea wing-backs ahead of Reece James and Ben Chilwell.

In attack, Tuchel once again has to deal with a major selection headache, considering he has to pick between six players for three positions. Timo Werner should lead the line for Chelsea against Sheffield United and with Hudson-Odoi dropping into the wing-back berth, Hakim Ziyech will get an opportunity to impress, while Mason Mount will be the other attacking midfielder for the Blues. 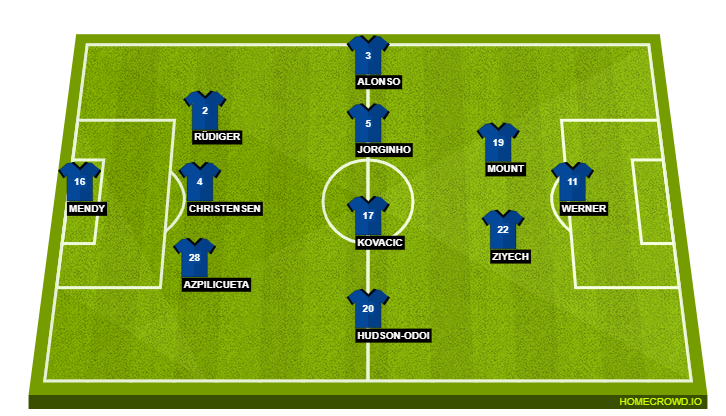 Chelsea seem to be on the up and running under the tutelage of Thomas Tuchel, even though there is still plenty of way to go before they become a fearsome prospect again. But while several players have grabbed their opportunities in the three games so far, Timo Werner’s struggles are still continuing.

The German international is proving to be a handful during the build-up plays, but his end product is still nowhere near where it needs to be. With Tammy Abraham and Olivier Giroud waiting in the wings and desperate for an opportunity to play in the most hotly contested position in the Chelsea side, Werner needs to step up against Sheffield United; for the rope might not be too long before he is relegated to the bench.

Sheffield United have proven themselves to be a much-improved side than they were till the dying moments of 2020. And, with a transitioning Chelsea side set to pay them a visit, the Blades might be fancying their chances of claiming another major scalp and continue reigniting their bid for a great escape from the relegation zone.

However, while Chris Wilder’s men should frustrate the Blues for large parts of the game, Chelsea’s own improvements at the back mean the hosts might not trouble Edouard Mendy much. On the other end, the brilliance of Mason Mount should shine through as he continues to win over Thomas Tuchel, although Timo Werner might still struggle. But, one defining moment should get Chelsea all three points in this one.