Leicester City will be eager to keep pace with the two Manchester clubs when they take on Wolves at the Molineux on Sunday.

Gameweek 23 of the 2020/21 Premier League season continues on Sunday, with as many as four matches on show. The second game on the day will be played at the Molineux, where Wolves will be playing hosts to Leicester City, with both teams eager to build on their midweek wins.

Wolves have been underwhelming for the most part of their 2020/21 Premier League campaign, having managed to win just seven of their 22 games till date. In fact, heading into this week, Nuno Espirito Santo & co. had gone eight league games without a win before a confidence-boosting 2-1 success against Arsenal earlier this week ended that run, although they still remain 14th on the table.

The reverse fixture, played back in November at the King Power Stadium, saw Leicester eke out a 1-0 win over Wolves, with Jamie Vardy scoring the only goal of the game. Ahead of the latest meeting between the two sides, The Hard Tackle takes a closer look at the encounter.

Yes, some of you spotted @JonnyOtto19 in training 😍

But you’ve not seen him do this…

Nuno Espirito Santo has a plethora of injury concerns hampering his preparations ahead of the visit of Leicester City. On Sunday, the Wolves manager will be bereft of the services of as many as five first-team players, with defence, in particular, posing a major concern.

The likes of Rayan Ait-Nouri, Roman Saiss, Fernando Marcal and Jonny Otto all remain on the sidelines, meaning Nuno’s left-back options are severely depleted. To that end, the Wolves boss will likely line his side up in a 4-2-3-1 formation once again, with Max Kilman playing as the left-back.

Kilman, though, will act as an auxiliary centre-back in the offensive phases, with right-back Nelson Semedo and left-winger Pedro Neto playing essentially as wing-backs on either flank. With Semedo and Neto providing the width higher up the pitch, Adama Traore and Daniel Podence will be given the freedom to express themselves in the final third.

Traore, Podence and Neto will all be the support cast for the central striker Willian Jose, who is still growing in the position that has been kept vacant by Raul Jimenez’s long-term injury. The onus, though, will be on the midfielders, not just to stop Leicester’s creative duo of Youri Tielemans and James Maddison in their tracks but also push Wolves forward when given the opportunity. 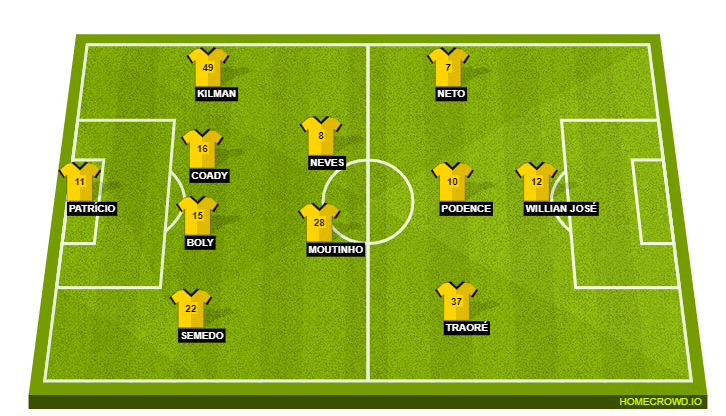 Unlike his counterpart in the Wolves dugout, Brendan Rodgers has been handed a double boost on the team news front ahead of the trip to the Molineux. On Sunday, the Leicester City manager will only have to make do without four first-team players, with a couple of players in contention to feature.

The likes of Wes Morgan, Timothy Castagne, Wesley Fofana and Dennis Praet remain unavailable. However, Rodgers can now call upon the services of Jamie Vardy and Wilfred Ndidi. While the Leicester boss has termed Vardy to be available, Ndidi is a minor doubt, although both are likely to come off the bench later on in the game.

With Vardy unlikely to be risked this early amid a fixture congestion, Kelechi Iheanacho should be leading the line for Leicester against Wolves once again. In fact, Rodgers is unlikely to make any major alterations to his side following an efficient display in the midweek fixture at Fulham.

That means Ayoze Perez should once again be deployed on the right wing, where his energy will come in handy. On the opposite flank, Harvey Barnes will once again create a creative trifecta along with James Maddison and Youri Tielemans, thereby allowing James Justin to bombard forward on his side.

Tielemans will also provide defensive support to the holding midfielder, who will once again be Hamza Choudhury, following his solid display last time out. At the back, the defensive quartet of Ricardo Pereira, Jonny Evans, Caglar Soyuncu and Justin pick themselves for one reason or another, with Kasper Schmeichel a certainty in the Leicester goal. 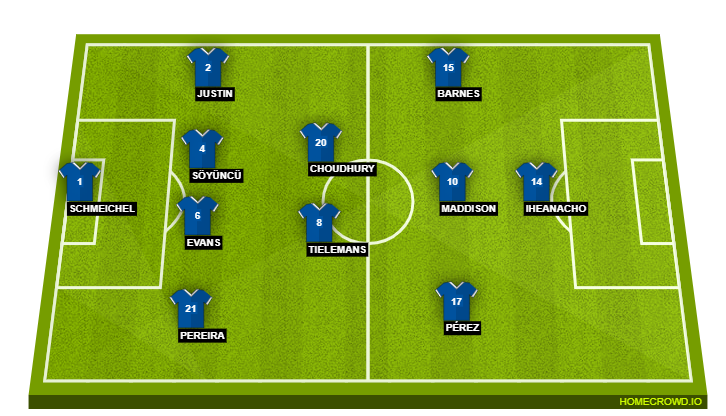 Kelechi Iheanacho showed major signs of improvement last time out against Fulham, but it goes without saying that Jamie Vardy is different class altogether. While the veteran English striker is not expected to spearhead the Leicester City attacker from the off against Wolves, he should come off the bench later on in the game.

When he does, it will be interesting to see if Vardy is showing any signs of rust in his game after undergoing a surgery. With Leicester reaffirming their status as top four hopefuls with every passing game, it is imperative that Brendan Rodgers gets Vardy in full flow for the second half of the season, and that starts with the game against Wolves on Sunday.

Wolves might have returned to winning ways, much to their relief, but for half of the game against Arsenal, they were thoroughly outplayed by a side that has not exactly been renowned for their attacking prowess this season. So, Leicester City will surely sniff blood and with Jamie Vardy set to return, the three points should be theirs.

The Hard Tackle predicts a 3-1 win for the visiting side.