Manchester United will aim to build on their big win over Southampton earlier this week when they face Everton at Old Trafford on Saturday.

The games are coming thick and fast in the Premier League, with Gameweek 23 getting underway on Saturday. The final game on the day will be played at Old Trafford, where Manchester United will be playing hosts to Everton, with three points of the utmost importance for both the teams.

Manchester United are enjoying a memorable 2020/21 Premier League campaign, wherein they have gone from strength to strength while proving their credentials in the title race. While the Red Devils do need to step up in the marquee fixtures, they have been ruthless against the much less fancied opponents more often than not. This quality was on show once again earlier this week, as they trounced Southampton 9-0.

Everton, like their hosts, have been incredibly impressive in the ongoing season, and the fact that they could theoretically be as high as third and over Liverpool after they have played their games in hand signals towards a marked improvement under the tutelage of Carlo Ancelotti. The Toffees made an impression again this week with an admirable 2-1 win over Leeds United at Elland Road.

The reverse fixture, played at Goodison Park back in November, saw Manchester United come from behind before beating Everton 3-1, with Ole Gunnar Solskjaer’s men also getting the better of the Merseyside outfit in the Carabao Cup. Ahead of the latest meeting between the two sides, The Hard Tackle takes a closer look at the encounter.

Ole Gunnar Solskjaer has a near full-strength squad at his disposal. (Photo by Ian MacNicol/Getty Images)

Ole Gunnar Solskjaer does not have any fresh injury concerns hampering his preparations ahead of the visit of Everton. On Saturday, the Manchester United manager will definitely be missing the services of just one first-team player, with Phil Jones sidelined with a knee injury.

In addition, Solskjaer is also sweating over the fitness of Eric Bailly, who is struggling to overcome a knock. There were also concerns over the potential availability of Edinson Cavani, who had picked up a minor ankle injury against Southampton. The veteran Uruguayan striker, though, is fit and available to take on Everton.

Solskjaer, though, might not take a chance with Cavani’s fitness, meaning Anthony Martial will lead the line for Manchester United. The Frenchman will receive service from Bruno Fernandes and Marcus Rashford, while Mason Greenwood will complete the attacking quartet, with the teenager looking to take up central positions, taking advantage of Aaron Wan-Bissaka’s newfound attacking verve.

On the left flank, Rashford’s superb chemistry with Luke Shaw should be on full show, with the English full-back carrying a great deal of threat on his wing. Paul Pogba will return to the field after missing the most recent game versus Southampton.  The Frenchman will likely pair up with the tireless Fred in the midfield double pivot, with Scott McTominay dropping out.

At the back, the concerns over Bailly’s availability means Victor Lindelof will partner Harry Maguire at the heart of the Manchester United defence, with Wan-Bissaka and Shaw the full-backs. Finally, there is no looking past David de Gea between the sticks. 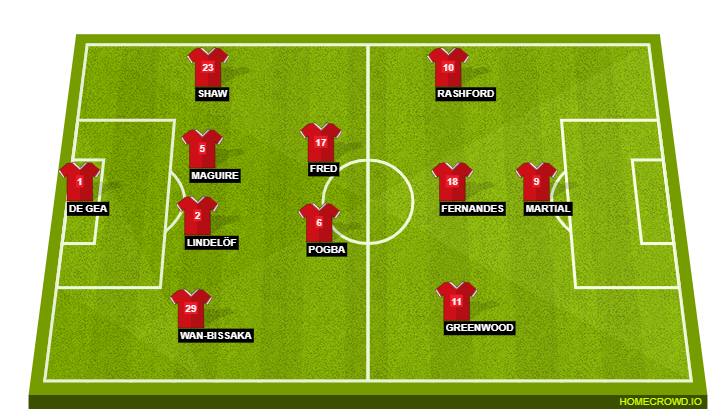 Like his counterpart in the Manchester United dugout, Carlo Ancelotti does not have any fresh roster issues to contend with ahead of his side’s latest fixture. On Saturday, the Everton manager will have to make do without three first-team players.

Allan has returned to training for the first time in nearly two months and is inching closer to his return, although the game against Manchester United comes too soon for him. In addition, Jordan Pickford (ribs) and Jean-Philippe Gbamin (Achilles) are also unavailable for Everton.

Pickford’s absence means that Robin Olsen will continue in goal for Everton, who will set up in a 4-2-3-1 formation, much like Manchester United. The visitors’ defensive line should comprise of Mason Holgate, Yerry Mina, Michael Keane and Lucas Digne, meaning captain Seamus Coleman will miss out.

Digne, in particular, will have an important role to play for Everton on both ends of the pitch, with his deliveries from open play as well as set-pieces being one of the chief sources of creativity for the visitors, who will hope to have Dominic Calvert-Lewin as a major threat in the air.

In midfield, Allan’s continued absence means Gylfi Sigurdsson will once again start in the double pivot alongside Abdoulaye Doucoure, who will reprise the holding midfield role. Sigurdsson, though, will combine with James Rodriguez in the central areas and look to carve open the Manchester United defence.

Richarlison will veer infield from left flank to not just allow Digne to overlap but also create overloads in and around the Manchester United box along with Calvert-Lewin. On the right flank, the in-form Alex Iwobi should be handed a start, with the Nigerian international providing the width on his side in the absence of someone like Coleman. 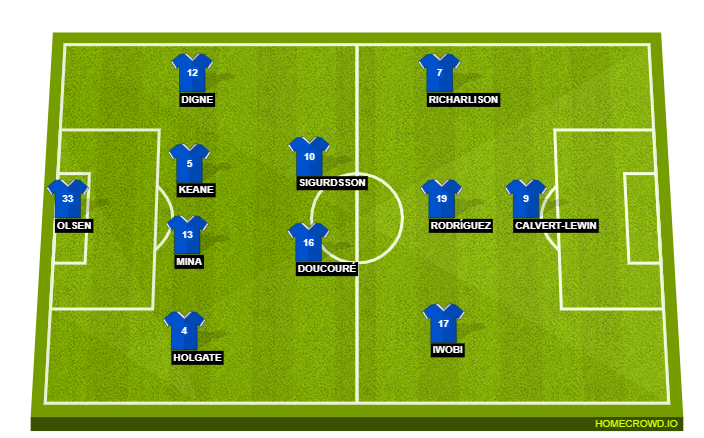 Over the past couple of months, Manchester United have, to the surprise of many, emerged as possible Premier League contenders. And so, it is no coincidence that several players have established themselves as pivotal figures for the Red Devils in this journey. Unfortunately for Anthony Martial, he is not one of those yet, and to add to his misfortune, Edinson Cavani is such a player.

However, with Cavani sustaining a minor ankle injury that could possibly restrict his game-time, Martial has an opportunity upon him, particularly in the wake of a fine display off the bench against Southampton earlier this week. Even if he does not start, Martial will surely come off the bench to make his 250th Manchester United appearance.

With Everton being one of his more fancied opponents – six goals and three assists in 11 outings versus the Toffees in all competitions – the Frenchman will look to build on the showing in the midweek fixture. If he does so, it does not only bode well for Manchester United but also for him in his battle with Cavani for the battle to nail down the central striker’s berth. A big game for Martial.

This is one of those potential banana skin games for Manchester United in their quest for the Premier League title. It is no secret that the Red Devils are not nearly the domineering side at Old Trafford that they are on the road. However, United have lost just one of their last 27 Premier League home games against Everton and are unbeaten in six (W4 D2).

On top of that, the smashing 9-0 win over Southampton will surely provide a timely boost to Ole Gunnar Solskjaer & co. as far as their confidence in home games is concerned. Having said that, Everton do boast one of the better records in the Premier League in away games, meaning they will be in contention for all three points on Saturday.

Expect Everton to breach David de Gea’s goal at least once. However, just like the reverse fixture, Manchester United should pull through, with Bruno Fernandes likely to shine after finally ending his mini-drought in the Premier League in the midweek game. The Hard Tackle predicts a 3-1 win for the hosts, taking them level on points with Manchester City before their game against Liverpool on Sunday.