Arsenal and Aston Villa will both be desperate to bounce back to winning ways when they go head to head at Villa Park on Saturday.

Gameweek 23 of the 2020/21 Premier League season is set to begin less than two days after the end of the previous round of fixtures. The curtains will be raised at Villa Park, where Aston Villa will play hosts to Arsenal in Saturday’s lunch-time kick-off, with both teams in need of all three points.

Aston Villa have enjoyed a far more successful 2020/21 campaign already compared to last season and bar any unexpected slump, they are set for another term in the Premier League. However, in recent weeks, Dean Smith’s men have slipped up a little, having managed to win just 2 of their last 7 league games.

The Villans, though, do have a couple of games in hand, which could bring them in discussion for a top six finish. Arsenal, on the other hand, had been showing signs of improvements in the past couple of months or so following a disastrous start to the season.

The Gunners, though, have now failed to win their last two games, with the latest result being a 2-1 defeat to Wolves, wherein they were down to nine men by full-time. So, it is a case of one step forward and one back for Mikel Arteta’s men for now and definitive progress is imperative if Arsenal are to step up under the tutelage of the Spaniard.

The reverse fixture, played at the Emirates back in November, saw Aston Villa grab a shock 3-0 win over Arsenal, with Ollie Watkins scoring a second half brace. Ahead of the latest meeting between the two sides, The Hard Tackle takes a closer look at the encounter.

Wesley is one of two Aston Villa players who will be missing against Arsenal. (Photo by Catherine Ivill/Getty Images)

Dean Smith does not have any pressing injury concerns hampering his preparations ahead of the visit of Arsenal. On Saturday, the Aston Villa manager will be bereft of the services of just two first-team players, with Wesley (knee) and Kortney Hause (foot) still sidelined with their respective fitness problems.

Smith, though, has enough cover in his squad to cover for the absence of the aforementioned duo. Indeed, Ollie Watkins, who was in fine touch in the reverse fixture, will once again lead the line for Aston Villa against Arsenal. On the other end, in Hause’s absence, Ezri Konsa will form the central defensive partnership with Tyrone Mings.

Konsa and Mings will be flanked by Matty Cash and Matt Targett, with the two full-backs playing a major role in the build-up play in the final third with their link-up with the wide men. Behind the defence, former Arsenal goalkeeper Emi Martinez will once again take his place between the sticks, eager to make amends on a disappointing display earlier this week against West Ham United.

Up ahead in midfield, Douglas Luiz and John McGinn will have a key role to play, as they will be tasked with keeping a lid on the output of Arsenal’s creative outlets Emile Smith Rowe and Bukayo Saka. McGinn will, in addition, also look to provide the forward thrust in the middle of the park, linking up with Aston Villa captain Jack Grealish who will, in turn, pull the strings.

Grealish will have the freedom to pop up in pockets of spaces, from where he will look to set the rest of the front-men up. Indeed, Grealish’s role will mean that Ross Barkley once again gets the nod in the no. 10 role ahead of Morgan Sanson, with the Englishman making late runs into the Arsenal box, where he will look to create overloads along with Watkins and Bertrand Traore. 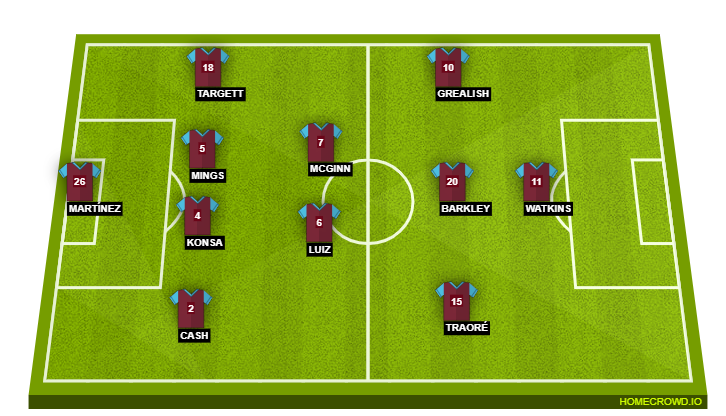 Unlike his counterpart in the Aston Villa dugout, Mikel Arteta has plenty of fresh roster issues to contend with ahead of the trip to Villa Park. On Saturday, the Arsenal manager could have to make do without as many as five first-team players.

Bernd Leno and David Luiz are certainties to miss out for Arsenal, after being sent off against Wolves earlier this week. While there was never any denying the legitimacy of Leno’s suspension, the Gunners had been hopeful that Luiz’s ban will be overturned after lodging an appeal against it. However, the FA has upheld the decision made in the match, meaning Luiz is unavailable.

Apart from Leno and Luiz, the likes of Mat Ryan, Pablo Mari and Kieran Tierney could miss the cut as well. Arteta had claimed in his pre-match press conference that Ryan had not trained till that moment and unless that has changed, it is likely that Runar Alex Runarsson will make his first Premier League start in the Arsenal goal.

In front of him, the Gunners will line up in a 4-2-3-1 formation which will mirror Aston Villa’s setup to a great extent. For Arsenal, Bukayo Saka will play a role similar to Jack Grealish’s, taking up central positions during build-up play and continue forging his creative tandem with Emile Smith Rowe. The key decision upon Arteta will be deciding who starts on the left flank.

Nicolas Pepe has been in fine form of late, but there is no denying the looming influence of Pierre-Emerick Aubameyang, who is back in contention after appearing off the bench against Wolves. Aubameyang’s fitness, though, is still a bit suspect, meaning Pepe should be handed another start, with Alexandre Lacazette spearheading the Arsenal attack against Aston Villa.

In midfield, there is no looking past the solid partnership of Granit Xhaka and Thomas Partey, although both the players need to step up after a couple of sub-par displays. Meanwhile, in defence, Cedric Soares will once again reprise the left-back role in Tierney’s absence, accompanying Hector Bellerin, Rob Holding and Gabriel Magalhaes, who will replace Luiz, at the back. 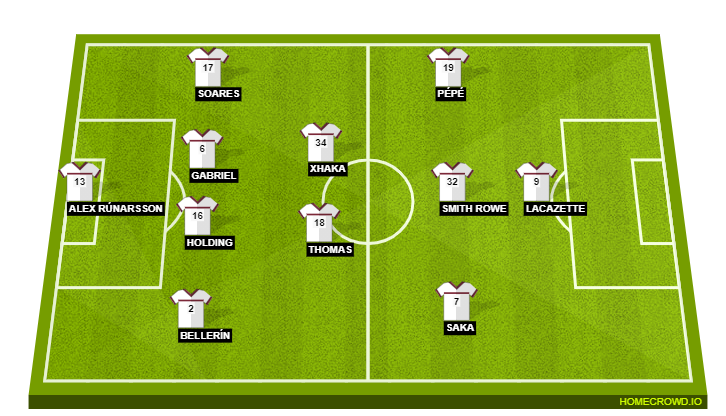 Back when the 2019/20 was upon its end, the biggest concern for Mikel Arteta and Arsenal was the contract situation of Pierre-Emerick Aubameyang. The FA Cup triumph perhaps, helped them tie their captain down to a new deal and that gave way for a lot of optimism.

After all, Aubameyang had been in the top echelons of goalscorers in the Premier League since his arrival in January 2018. However, while much of the optimism still remains due to all the goodwill that Aubameyang has accumulated in the last three years, his form has to be a concern.

With Arsenal visibly showing signs of improvements, it is Aubameyang who is playing catch-up, as the likes of Nicolas Pepe, Alexandre Lacazette and Granit Xhaka have all stepped up and supporting Bukayo Saka and Emile Smith Rowe ably. It is now up to Aubameyang to rediscover his best and re-capture the mantle of being Arsenal’s talisman. After all, if Arsenal to mount a challenge for the top six finish, their captain needs to deliver the goods..

This one is quite a tricky game to call. Aston Villa have not been at their best for the better part of the past month or so. Arsenal, on the other hand, have taken some definitive strides forward, but are also missing key players. It is Bernd Leno’s absence, in particular, that will be telling, with Runar Alex Runarsson really being a mess while also having the effects of his underconfidence on the defence.

Having said that, before the dismissals of David Luiz and Leno, Arsenal were seemingly playing the best football they have played this season, carving open the Wolves almost at will at times. If they can reproduce such a brand of football, the north Londoners will surely be a handful for the Aston Villa defenders.

Having said that, the hosts themselves will be in contention on the opposite end, if not for the aforementioned nervousness of Runarsson but due to the sheer brilliance of Jack Grealish. However, Arsenal will have the edge if their attacking output continues to improve, which is why The Hard Tackle predicts a narrow 2-1 win for Mikel Arteta & co.