The games continue to come thick and fast all across Premier League and Gameweek 22 of the 2020/21 season will conclude on Thursday before the next round of fixtures begins. The current matchday will culminate with a fiery London derby, as Tottenham Hotspur play hosts to Chelsea at the Tottenham Hotspur Stadium.

Tottenham had made a strong start to the 2020/21 season and were initially branded as potential contenders for the Premier League title. However, a miserable run of form since December has seen Spurs go on a steady slide down the table, having managed to win just two of their last nine games in the competition. This run of results has seen them drop to 6th in the standings.

Chelsea, like their London rivals, have endured similar fate, albeit with more severe consequences. The Blues, too, had been hopeful of a possible title tilt, but have gone from the top of the standings to 7th in a span of two months, no thanks to a run of just three wins in 10 games. The horrendous run also cost Frank Lampard his job as the first-team boss, with Thomas Tuchel taking charge in his stead.

The reverse fixture, played at Stamford Bridge back in November, was a drab affair which saw Chelsea play out a goalless stalemate with Tottenham. Ahead of the latest meeting between the two sides, The Hard Tackle takes a closer look at the encounter.

Harry Kane remains unavailable for Tottenham for the game against Chelsea. (Photo by Justin Setterfield/Getty Images)

Things have not changed much on the team news front for Jose Mourinho, who continues to be bereft of the services of four first-team players ahead of the visit of Chelsea. The major absentee for Tottenham is star striker Harry Kane, who is recovering from an ankle injury.

In addition to Kane, the likes of Sergio Reguilon, Giovani Lo Celso and Dele Alli all continue to remain sidelined. The key decision for Mourinho will once again surround how he manages to mitigate the absence of Kane. And, having seen the 3-4-2-1 experiment fail spectacularly, the ex-Chelsea manager should revert to lining Tottenham up in his favoured 4-2-3-1 setup.

This time around, Mourinho could deploy a natural striker in Carlos Vinicius as the focal point of the Tottenham attack, with Son Heung-min returning to left-wing. On the opposite flank, Steven Bergwijn ought to get the nod over the likes of Lucas Moura, Erik Lamela and the hopelessly out of form Gareth Bale.

Tanguy Ndombele will likely reprise the no. 10 role once again, leaving the heavier defensive work to the able shoulders of Moussa Sissoko and Pierre-Emile Hojbjerg, who was one of the better performers for Tottenham in their disastrous display against Brighton & Hove Albion last weekend.

Both Hojbjerg and Sissoko will aim to harry the Chelsea creative players in order to win the ball back quickly before releasing the players in front of them at pace. Behind them, Toby Alderweireld should have Eric Dier as his partner at the heart of the Tottenham defence, with Matt Doherty and Ben Davies being the two full-backs. In goal, there is no looking past Hugo Lloris. 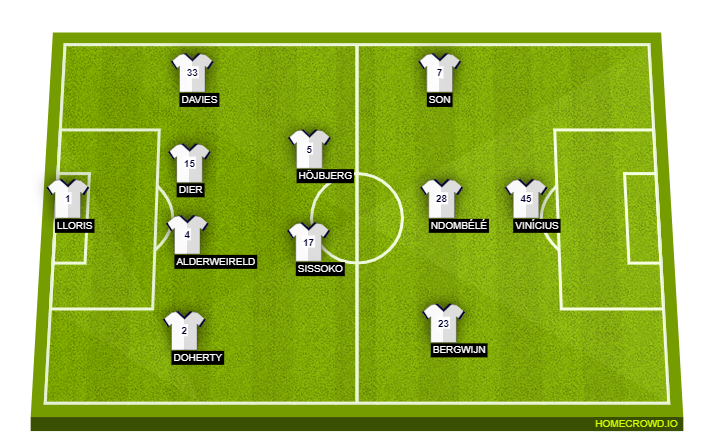 Unlike his counterpart in the Tottenham Hotspur dugout, Thomas Tuchel has a couple of pressing injury concerns hampering his preparations ahead of his side’s latest fixture. On Thursday, the Chelsea boss could have to make do without a couple of first-team players.

Both Kai Havertz and Kurt Zouma are recovering from knocks and face late fitness tests to determine their availability. While Zouma is not really a regular under Tuchel yet, Havertz’s fitness issues would pose a concern to Tuchel, although he has enough cover in his squad for the German international.

The newly-appointed Chelsea manager should continue to make alterations to his side, particularly in attack, where Olivier Giroud should return to lead the line for Chelsea against Tottenham. Behind him, Hakim Ziyech and Mason Mount ought to remain narrow and look to play in between the lines, allowing the wing-backs to provide the width higher up the pitch.

These wing-backs should once again be Callum Hudson-Odoi and Marcos Alonso, both of whom were impressive last time out against Burnley. Hudson-Odoi, in particular, has been a revelation for Chelsea in a largely unfamiliar right wing-back role, although he will face his biggest test yet in Son Heung-min.

In the middle of the park, the energy and work-rate of Mateo Kovacic and N’Golo Kante will hold the key for Chelsea, with the objective being to not remain behind the ball for longer periods. At the back, the three-man central defensive unit comprising of Cesar Azpilicueta, Thiago Silva and Antonio Rudiger ought to continue, with the trio providing cover to Edouard Mendy in goal. 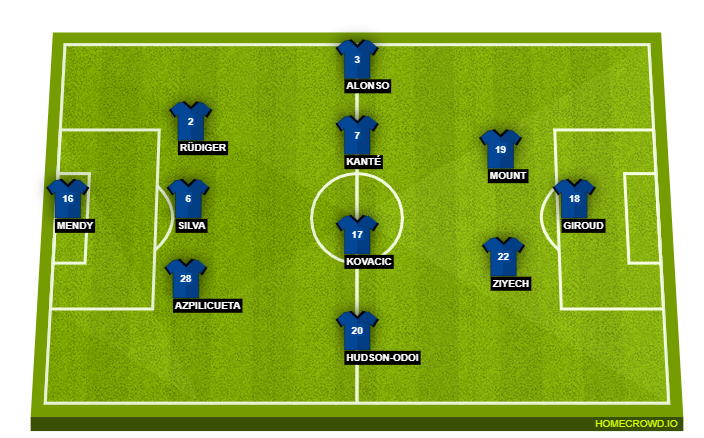 With goalmouth action likely to come at a premium once again, the role of the midfielders becomes all the more crucial in this fixture. For Chelsea, N’Golo Kante and Mateo Kovacic will play a pivotal role while for Tottenham, it is the tireless Pierre-Emile Hojbjerg who will need to rise to the occasion again.

The Dane has been one of the signings of the season till date but with Tottenham slipping up of late, his importance has only grown that much more. With Harry Kane still unavailable and the rest of the Tottenham attack not being efficient enough in the final third, Hojbjerg’s defensive output will be extremely critical, if Spurs are to receive more scoring opportunities as the game progresses.

Rarely does a Jose Mourinho team lose back-to-back games. On Thursday, the former Chelsea boss is at risk of losing successive home league games for the very first time in his career. With such a risk looming large, the one thing that is certain is that he will opt for a defensive approach in order to absorb the threat of the Chelsea attack.

On the opposite end, Tottenham’s struggles in the absence of Harry Kane should continue, though their improved defensive showing should help them avoid losing three top-flight fixtures in a row for the first time since November 2012. Expect another closely-contested affair that will be bereft of any sort of exciting action.

Thomas Tuchel, though, could become the first Chelsea boss to record clean sheets in each of his first three league games since Jose Mourinho in August 2004. The Hard Tackle predicts another 0-0 draw between Chelsea and Tottenham, with the Blues the likelier of the sides to eke out a narrow win.