Leicester City will hope to bounce back to winning ways and keep pace with Premier League leaders Manchester City when they face Fulham on Wednesday.

The 2020/21 Premier League season continues to move forward at a breakneck pace, with Gameweek 22 underway. Five matches are on show on Wednesday, with the action kicking off at Craven Cottage, where Fulham will play hosts to Leicester City, with both sides looking to return to winning ways.

Fulham have been quite impressive this season under the tutelage of Scott Parker, who has forged a resilient side that has been quite hard to beat for any and every sort of opponents. However, things have now reached a point that the Cottagers desperately need wins to keep their Premier League status intact, with Brighton’s win over Tottenham on Sunday widening the gap to safety.

Leicester, on the other hand, have once again challenged for a top-four spot, backed up by some big results against the marquee names of the Premier League. The Foxes are currently 4th on the table, just five points off the top of the table, but have slipped up in their last two games, having first been held to a 1-1 draw by Everton before being handed a 3-1 defeat by Leeds United this past weekend.

The reverse fixture, played at the King Power Stadium back in November, saw Fulham eke out a narrow 2-1 win over Leicester City, in what is one of only two games that has seen them grab the maximum points this term. Ahead of the latest meeting between the two sides, The Hard Tackle takes a closer look at the encounter.

"Our next challenge is turning draws into wins. Ultimately, it’s about winning. We’ve given ourselves a real chance. We’ll keep working at it and keep pushing to change that."#FULLEI pic.twitter.com/i69WYldHU1

Scott Parker does not have any fresh injury concerns hampering his preparations ahead of the visit of Leicester City. On Wednesday, the Fulham manager will be bereft of the services of just two first-team players, with Terence Kongolo (hamstring) and captain Tom Cairney (knee) still sidelined.

Parker largely preferred two formations this season, lining his side up either in a 3-4-3 or 3-5-2. On Wednesday against Leicester, the Englishman will likely set Fulham up in a 3-5-2 formation, with Ruben Loftus-Cheek likely to be deployed in a slightly more withdrawn role after being used as a winger last time out against West Bromwich Albion.

The objective will be to put in more men in behind the ball, with Harrison Reed coming in for Mario Lemina to add more solidity in the defensive phase. Andre-Frank Zambo Anguissa will be the third man in the middle of the park, with the Cameroonian midfielder creating a tandem along with Reed.

The shift in formation also means that the wing-backs – likely to be top scorer Bobby Decordova-Reid and Antonee Robinson – will have even more of an onus on them to provide width higher up the pitch, especially with the two front-men – Ademola Lookman and Aleksandar Mitrovic – staying narrow in the final third.

At the back, Ola Aina, Joachim Andersen and Tosin Adarabioyo will form the three-man central defensive unit, with Fulham taking a 5-4-1 shape in the defensive phase. This will see the wing-backs drop deep to allow the centre-backs to remain compact, while Loftus-Cheek and Lookman going wide in midfield. In goal, there is no looking past Alphonse Areola. 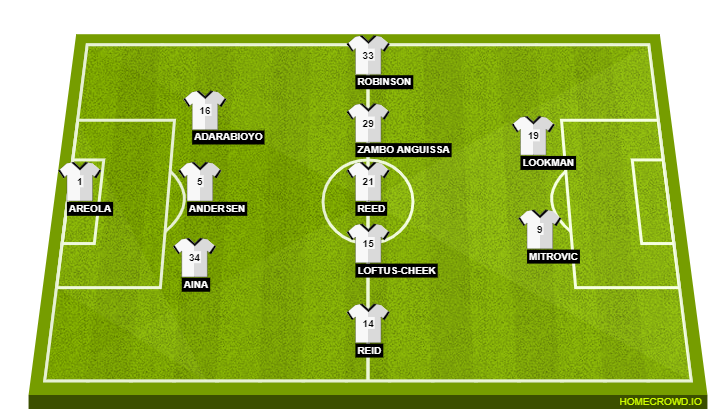 Unlike his counterpart in the Fulham dugout, Brendan Rodgers has quite a few issues to contend with ahead of the visit to Craven Cottage. On Wednesday, the Leicester City boss will likely have to make do without as many six first-team players.

The major absentee for the Foxes is star striker Jamie Vardy, who has stepped up his recovery after undergoing a hernia operation, but the game has come too soon for him. Apart from Vardy, Leicester will also be missing the likes of captain Wes Morgan, Timothy Castagne, Wilfred Ndidi and Dennis Praet.

In addition, Wesley Fofana is also struggling to recover from a hamstring complaint, as confirmed by Rodgers during his pre-match press conference. The youngster is unlikely to be risked by the Leicester boss, meaning Caglar Soyuncu should form the central defensive partnership alongside Jonny Evans.

Castagne’s absence means Ricardo Pereira comes in to make his first Premier League start of the season at right-back, with James Justin a certainty on the opposite flank. Behind the defence, stand-in captain Kasper Schmeichel is an automatic pick between the sticks for Leicester.

Up ahead in midfield, Nampalys Mendy will continue to deputise for the injured Ndidi, with his tireless work-ethic likely to stand Leicester in good stead against a resolute Fulham side. Mendy will receive defensive support from Youri Tielemans, who will also be the provide the initial creative spark for the visitors.

Tielemans will look to link up with James Maddison and Harvey Barnes to provide the forward thrust, with Ayoze Perez leading the line for Leicester against Fulham in the absence of Vardy. The final spot in the side goes to Marc Albrighton, who will put in the hard yards both on and off the ball to assert the Foxes’ authority in the game. 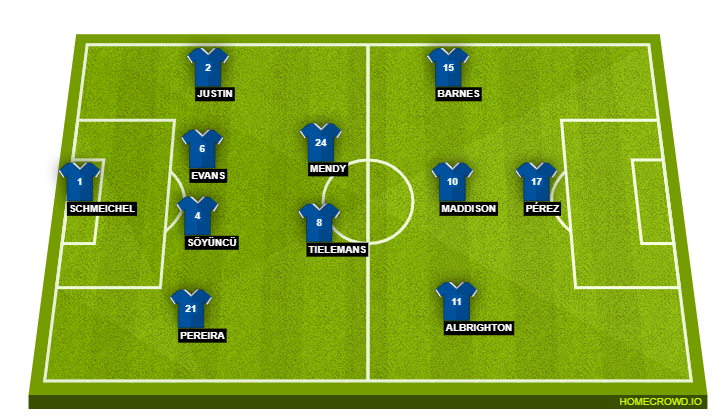 Jamie Vardy is by far the most important player for Leicester City, but this season is proving to be the making of Harvey Barnes. While James Maddison has started to click a great deal of late, it is the sheer brilliance of Barnes on the left flank that has enabled the likes of Vardy and Maddison to flourish that much more.

The young winger has added layers to his game and that has been evident with every passing game. Even against Leeds United, Barnes was one of the better performers in an underwhelming evening. And, with Vardy still unavailable, the onus will be on Barnes to shoulder some added responsibility to get Leicester over the line at the end of a tricky test against Fulham.

This is another potential banana skin game for Leicester City. While Fulham have struggled to grab all three points in games, they could still inflict damage on the Foxes, who cannot afford many slip-ups if they are to assert themselves into a strong position in the top four race and beyond.

Having said that, Leicester do have an impressive record on the road in the Premier League this season. And while the continued absence of Jamie Vardy will have its effect, the individual qualities of Youri Tielemans, James Maddison and Harvey Barnes should pull them just clear of Fulham. With that in mind, The Hard Tackle predicts a 2-1 win for Brendan Rodgers & co.