Arsenal will be hoping to continue their unbeaten run in the Premier League when they take on Wolves at the Molineux on Tuesday.

The games continue to come thick and fast across Europe and in the Premier League, Gameweek 22 of the 2020/21 season is set to begin just a couple of days after the end of the previous round of fixtures. The latest matchday will be kicked off on Tuesday at the Molineux, where Wolves will play hosts to Arsenal.

Wolves have been quite underwhelming in the 2020/21 Premier League season till date. Having been contenders for a UEFA Europa League spot since returning from the Championship, the Midlands club are mired in mid-table as things stand. Currently on an eight-game winless run in the top-flight, Nuno Espirito Santo’s men are in need of a turnaround if they are to achieve their objectives this term.

Arsenal, on the other hand, have turned their fortunes around to some extent in the past month or so. While the Gunners still have their fair share of problems on the creative and goalscoring front, a solid defence has helped them to a seven-game unbeaten run, which has slightly elevated Mikel Arteta & co. to 10th on the table and within touching distance of a European spot.

The reverse fixture, played at the Emirates back in November, saw Wolves come from behind to secure a narrow 2-1 win, in a game that was infamous for the frightening head injury suffered by Raul Jimenez. Ahead of the latest meeting between the two sides, The Hard Tackle takes a closer look at the encounter.

Raul Jimenez remains on the sidelines due to his long-term head injury. (Photo by Marc Atkins/Getty Images)

Nuno Espirito Santo does not have any fresh injury concerns hampering his preparations ahead of the visit of Arsenal. On Tuesday, the Wolves manager could be bereft of the services of as many as five first-team players.

Raul Jimenez, with his aforementioned long-term head injury, is a long-term absentee, and so is Jonny Otto (knee). Apart from the aforementioned duo, the likes of Fernando Marcal (groin), Roman Saiss (knock) and Rayan Ait-Nouri (groin) are all also likely to miss out for Wolves against Arsenal.

The potential absence Ait-Nouri and Saiss means that Nelson Semedo will once again be deployed as a left wing-back, with Ki-Jana Hoever starting on the opposite flank. Nuno should once again line his side up in a 3-4-2-1 formation, having ended the experiment with the 4-3-3. The back three in the Wolves side will, therefore, comprise of Willy Boly, Conor Coady and Max Kilman.

Up ahead in midfield, Ruben Neves should come into the double pivot, with Leander Dendoncker making way. Neves will, thus, pair up with compatriot Joao Moutinho in the middle of the park, with the duo’s proficiency on the ball making getting them the nod.

Finally, in attack, Adama Traore and Fabio Silva could miss out again. Willian Jose will lead the line for Wolves against Arsenal, with the support act coming from Daniel Podence and Pedro Neto. The duo will look to remain compact higher up the pitch, creative overloads in and around the Arsenal box, with the wing-backs providing the width higher up the pitch. 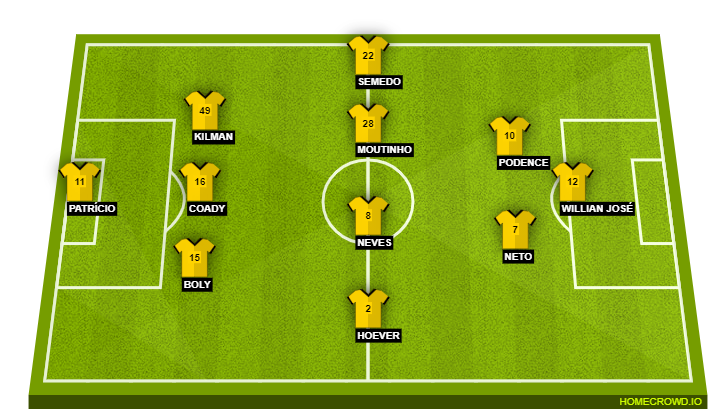 Like his counterpart in the Wolves dugout, Mikel Arteta has a number of pressing squad issues to contend with ahead of the visit to the Molineux. On Tuesday, the Arsenal boss could have to make do without as many as five first-team players, much like Wolves.

While no player is in the treatment room, there are several who are battling to regain fitness in time for the midweek Premier League fixture. The likes of Kieran Tierney, Bukayo Saka and Pierre-Emerick Aubameyang are all yet to take part in full training, while Pablo Mari and Dani Ceballos will likely be eased back in after only recently returning to contention.

That means that despite the short turnover of days, changes are likely to be kept to a bare minimum on Tuesday. In fact, only a couple of shuffles are expected, which will likely come in attack. One of these should see Martin Odegaard make his full debut, reprising the no. 10 role which allows Emile Smith Rowe some much-needed rest.

The other change could be forced, with Willian coming in of compatriot Gabriel Martinelli on the left-wing. On the opposite flank, Nicolas Pepe is a certainty, especially following a promising display against Manchester United. Alexandre Lacazette will lead the line for Arsenal against Wolves, having not suffered any ill effects of a nasty blow to the head he took in the weekend game.

In midfield, Arteta has no option but to continue with Thomas Partey and Granit Xhaka in the double pivot, with the duo not getting any rest just yet. The same goes for the defenders, with Rob Holding and David Luiz set to pair up at the heart of the Arsenal backline, while Hector Bellerin and Cedric Soares will continue as the full-backs. 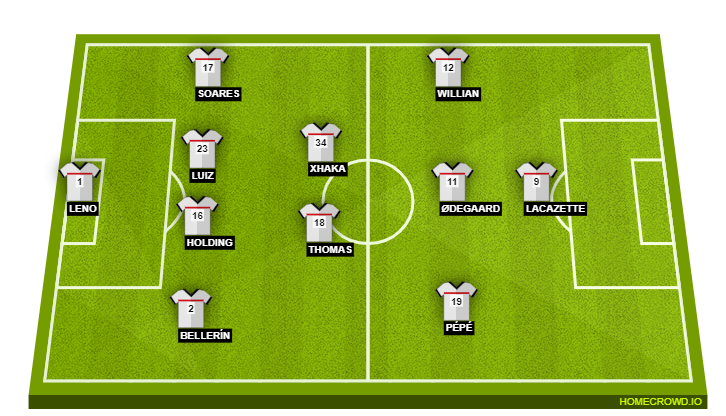 It was a transfer rumour that came out of nowhere before the move was wrapped up in no time. Now that he is at Arsenal, Martin Odegaard will have a lot to ponder as far as the remainder of the season is concerned. The Gunners, too, will be hoping for some much-desired injection of creativity from the young Norwegian.

While he did not get long to showcase his best abilities, Odegaard now has the chance to show just why Arsenal took the plunge with him. A tricky test against Wolves is just the kind of game that can elevate the 22-year-old to the status of an instant hero, for Arsenal still remain in the hunt for wins to continue their push up the table. A big game awaits Odegaard on his full debut.

This is a game that is unlikely to have a lot of goals in it. Neither side is known for being prolific while Arsenal’s solidity at the back means Wolves’ struggles could be set to continue. Indeed, for all the talks about Arsenal’s struggles to score goals consistently, Wolves are in an even worse a predicament.

The woes are now set to worsen for Nuno Espirito Santo and his charges, especially with Arsenal looking quite imperious on their travels. With that in mind, one can expect a closely-contested affair, albeit one that should see Mikel Arteta & co. nick a 1-0 win over Wolves.