Manchester City will hope to consolidate their place atop the Premier League table when they face Sheffield United at the Etihad on Saturday.

The action continues to be relentless all across Europe, and in the Premier League, it is coming at a breakneck pace. The current leaders in the competition will be in action on Saturday afternoon, as Manchester City play hosts to Sheffield United, hoping to continue their fine run of form.

Pep Guardiola & co. have put their poor start to the season in the rear-view mirror. Manchester City have now won each of their last 11 games across all competitions, with seven of those coming in the Premier League. This run of results in the top-flight has taken them to the top of the table, a point ahead of neighbours Manchester United with a game in hand.

Sheffield United, on the other hand, have been the bottom dwellers in the Premier League pretty much since the get-go. Wins have come at a premium for the Blades, although both of the victories have come in their last three outings in the competition. These results have given Chris Wilder’s men a glimmer of hope in their bid to miraculously escape the clutches of relegation, though they remain 10 points adrift of safety.

The reverse fixture, played at Bramall Lane back in October, ended in a 1-0 win for Manchester City courtesy a first-half goal by Kyle Walker. Ahead of the latest meeting between the two sides, The Hard Tackle takes a closer look at the encounter.

Cause to be cautious says the boss 👀

Pep Guardiola does not have any fresh roster problems hampering his preparations ahead of the visit of Sheffield United. On Saturday, the Manchester City manager will continue to be bereft of the services of three first-team players.

The major absentee once again is Kevin De Bruyne, who is recuperating from a hamstring injury. Apart from the Belgian playmaking genius, Manchester City are also without Nathan Ake (match fitness) and Sergio Aguero, who continues to await clearance to return to action, as confirmed by Guardiola during his pre-match press conference.

In Aguero’s continued absence, Gabriel Jesus remains the only recognised striker at Guardiola’s disposal. However, the Brazilian international is unlikely to start, with Riyad Mahrez once again reprising the false nine role, while Raheem Sterling and Phil Foden will be the two wide men.

While Sterling will be more direct in his approach, Foden will largely look for scoring opportunities by drifting into central areas. The front-men will be supplied by Ilkay Gundogan and Bernardo Silva, both of whom will take up advanced positions during the offensive phases, with the formation morphing into a 4-1-4-1, leaving Rodri as the deepest of the three midfielders.

At the back, there should be one change in order, with Kyle Walker coming in for Oleksandr Zinchenko. Walker will take up his usual right-back berth, meaning Joao Cancelo moves out to the left flank, with Ruben Dias and John Stones pairing up at the heart of the Manchester City defence. In goal, Ederson Moraes is the obvious pick for the hosts. 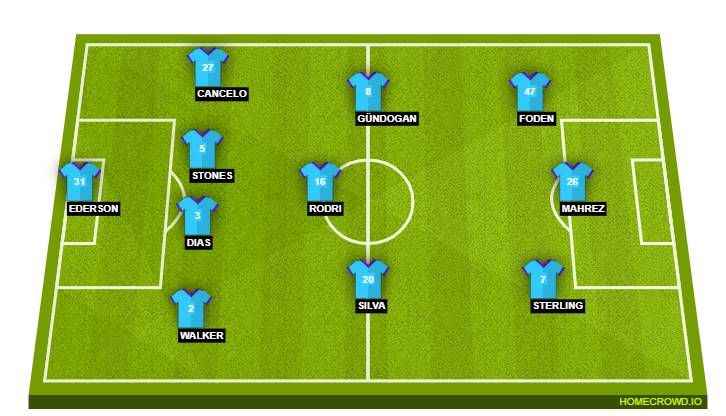 Unlike his counterpart in the Manchester City dugout, Chris Wilder has been handed a double boost on the team news front ahead of the visit to the Etihad. On Saturday, the Sheffield United boss will only have to make do without five first-team players, with a couple of squad members back in the fold.

The likes of Jack Robinson, Enda Stevens, Jack O’Connell, Sander Berge and Ben Osborn all remain unavailable and are no closer to returning. However, John Egan is back at Wilder’s disposal after serving his one-match suspension, while Oliver McBurnie could be a part of the travelling squad as well.

McBurnie, though, is unlikely to start, with David McGoldrick and Oliver Burke likely being the strike partnership for Sheffield United. The duo will mostly feed off scraps against a sturdy Manchester City defence and will, therefore, need to be clinical with every afforded opportunity.

In midfield, Berge’s absence means Oliver Norwood is a certainty in the holding midfield role, with John Lundstram and John Fleck providing defensive support while also charging forward on the break. Out wide, George Baldock and Max Lowe will likely be the two wing-backs, with the duo whipping in crosses when moving forward.

The wing-backs will also drop deep to create a 5-3-2 shape in the defensive phase, supporting the three centre-backs – Chris Basham, Ethan Ampadu and John Egan. Finally, Aaron Ramsdale is a certainty between the sticks for Sheffield United. 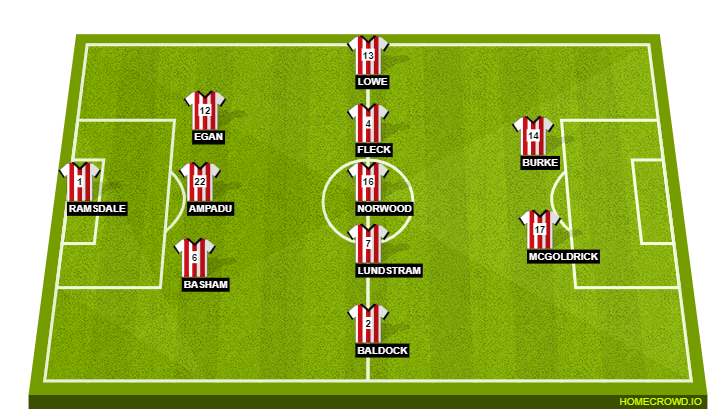 In what is starting to become a memorable campaign for Manchester City, one player has been going above and beyond what his primary responsibilities are. Indeed, Ilkay Gundogan has gone on to discover a prolific side to his game, scoring in just about every match he features in.

Gundogan has found the back of the net in each of the last three Premier League games and is on the verge of becoming the first German to score in four consecutive appearances in the competition. With the form he is in, he has become an indispensable figure for Manchester City, with Pep Guardiola also confirming the same; and you really can’t bet against him creating history. A big evening beckons Gundogan.

Manchester City are simply unstoppable at the moment. Sheffield United are sure to buoyed after their shock win over Manchester United. However, a quickfire twin away win in Manchester is highly unlikely, not just because of the form of City’s attack, but also their defence.

Indeed, Manchester City have conceded just one goal in the 10 Premier League matches in which Ruben Dias and John Stones have started together and are primed to keep another clean sheet on Saturday. Expect the likes of Ilkay Gundogan, Phil Foden and Raheem Sterling to fire, helping the hosts to a 3-0 win over Sheffield United.