Serie A leaders AC Milan will be desperate to bounce back to winning ways when they take on Bologna at Stadio Renato Dall’Ara on Saturday.

The second half of the 2020/21 Serie A season kicks off this Friday, with Matchday 20 beginning with an intriguing match-up between Torino and Fiorentina. The league leaders AC Milan will be in action first up on Saturday, when Bologna play hosts to them at Stadio Renato Dall’Ara.

Bologna endured an underwhelming first half of the 2020/21 Serie A campaign to say the least. The Rossoblu managed to win just five of their opening 19 games, with their most recent game ending in a 2-0 defeat at Juventus last weekend. Four of those victories have come at home for Sinisa Mihaljovic’s men, which would give them some hope of an upset over the table-toppers.

Speaking of AC Milan, they are coming on the back of their worst week of the 2020/21 so far. The Rossoneri were humbled in a 3-0 thrashing by Atalanta – their second defeat in Serie A this term – last weekend. Stefano Pioli & co. then went on to be beaten 2-1 by Inter Milan, in the Coppa Italia. The visitors, though, have the best away record in Serie A, having dropped points just once in nine outings.

The reverse fixture, played at San Siro back in September, saw AC Milan cruise to a 2-0 win over Bologna, courtesy a brace by talisman Zlatan Ibrahimovic. Ahead of the latest meeting between the two sides, The Hard Tackle takes a closer look at the encounter.

Sinisa Mihajlovic does not have any fresh injury concerns to contend with ahead of the visit of AC Milan. Against the Serie A leaders on Saturday, the Bologna manager will be bereft of the services of just two first-team players

Gary Medel (calf) and Federico Santander (knee) remain on the sidelines due to their respective injuries and are no closer to returning. However, there is some good news for Mihajlovic, who has welcomed back Ibrahima Mbaye following his recovery from a knee injury. The Senegalese right-back is a part of the matchday squad to face AC Milan.

Mbaye, though, is unlikely to start ahead of Lorenzo De Silvestri, who will be stationed on the right side of the Bologna defence, with Mithcell Dijks a certainty on the left flank. The duo will largely remain pinned back but will be a factor during counter-attacking moves.

Danilo and Takehiro Tomiyasu will form the central defensive partnership for the hosts, with the excellent Lukasz Skorupski picking himself between the sticks. The Bologna stopper will once again be a busy man in goal versus AC Milan, following his phenomenal display against Juventus.

Up ahead in midfield, Jerdy Schouten and Nicolas Dominguez will form the double pivot, with the duo looking to remain compact behind the ball and keep things tight in the middle of the park. Roberto Soriano will reprise the no. 10 role, with the 29-year-old playing off of the central striker for the most part while also being the furthest man forward at times.

The aforementioned central striker should continue to be Musa Barrow, who could feed off scraps on Saturday and will need to be clinical in front of goal. Out wide, Riccardo Orsolini and Nicola Sansone will look to be direct in their approach when they hit Milan on the counter. 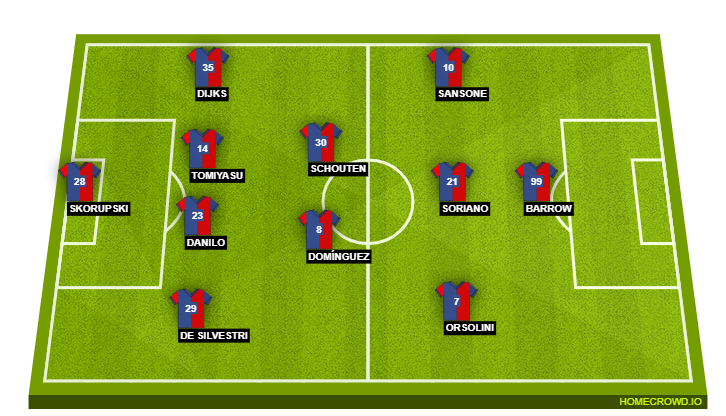 Unlike his counterpart in the Bologna dugout, Stefano Pioli has been greeted by a mixed bag of updates on the team news front ahead of the trip to Stadio Renato Dall’Ara. On Saturday, the AC Milan boss could have to make do without as many as eight first-team players.

The positive news comes in the form of Ismael Bennacer’s return to training. The Algerian holding midfielder could be a part of the matchday squad, but is unlikely to start. AC Milan, though, will surely travel to Bologna without Simon Kjaer (hamstring), Pierre Kalulu (hip), Matteo Gabbia (knee) and Hakan Calhanoglu (coronavirus).

Ibrahimovic, in particular, will look to make amends following his clash with Romelu Lukaku in the Coppa Italia tie earlier this week, which paved the way for a lot of controversy. As for the others, Leao will look to veer infield for the most part to clear space for Theo Hernandez to overlap, while Hauge will pull the strings when given the chance, while Castillejo will mostly remain on the right flank.

The midfield double pivot will see Franck Kessie and Soualiho Meite, considering Bennacer will not start and Tonali is also battling to be fit enough to be involved at all. Kessie will don the creative hat for Milan, with Meite being the midfield enforcer.

At the back, Davide Calabria will be the other full-back, but the Italian international will not charge forward as much as Hernandez on the left wing, with his major creative output being long, looping passes. At the heart of the AC Milan defence, Fikayo Tomori is set for his full debut, with Alessio Romagnoli being his partner. In goal, there is no looking past Gianluigi Donnarumma. 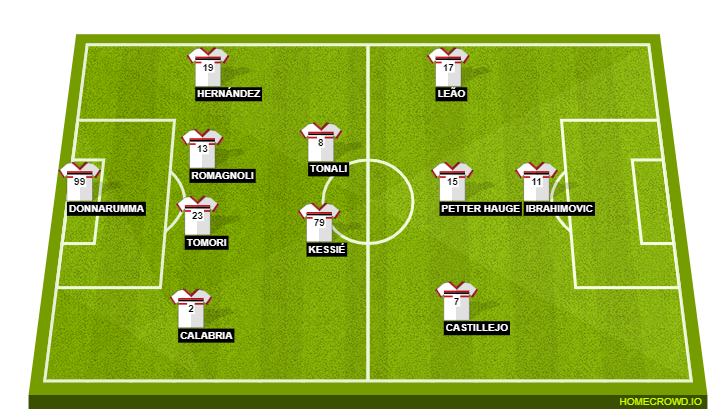 Who else but Zlatan Ibrahimovic? The ongoing week has already been quite an eventful one for the veteran Swedish striker, who will be eager to see his side over the line this time around after going from hero to zero against Inter Milan in the cup tie.

With Ante Rebic still missing, Ibrahimovic will also have a lot riding on him inside the Bologna box, although he will have support from Rafael Leao. Most importantly, though, Ibrahimovic will need to lead by example in the final third as AC Milan look to end their mini-losing run and stop it from becoming a rut.

The lengthy absentee list is starting to have its effect on AC Milan. Brilliant with their efficiency till now, fatigue is starting to set in for some of the players, which means there is room for slip-ups for the Serie A leaders. However, they next face a side they have dominated for the best part of the past half-a-decade.

Bologna’s defensive woes also make them the ideal opponents for an AC Milan side that is eager to start being more prolific. The Rossoblu have not kept a clean sheet in back-to-back home games and that is unlikely to change on Saturday. The visitors, though, should shut Bologna out, with The Hard Tackle predicting a 2-0 win for Stefano Pioli’s men.