Chelsea will take to the field for the first time since the sacking of Frank Lampard when they welcome Wolves to Stamford Bridge on Wednesday.

The games continue to come thick and fast all across Europe and in England, Gameweek 20 of the 2020/21 season is underway. One of the games under the spotlight this midweek will be played at Stamford Bridge on Wednesday when Chelsea will be playing hosts to Wolves in the first outing in the post-Frank Lampard era.

Chelsea have endured a roller-coaster of a 2020/21 Premier League campaign. It was not too long ago that the Blues were being projected as one of the contenders for the title. However, in less than two months, that status has dissipated away, with the west Londoners now battling for a top-four spot. The mini-crisis invariably claimed a victim, with Frank Lampard being sacked on Monday.

Chelsea were quickly in the hunt for a replacement, with Thomas Tuchel now taking over the reins at Stamford Bridge and the German will be aiming to start his stint with a win. Wolves, like their hosts, have been rather underwhelming as well this term, having failed to win 13 of their 19 league games till date. Such a dismal record has left them languishing at 14th on the table.

The Midlands club have managed just one win in their last nine top-flight outings, with that sole victory coincidentally coming in the reverse fixture against Chelsea. Wolves won that game, coming from behind to eke out a narrow 2-1 victory. Ahead of the latest meeting between the two sides, The Hard Tackle takes a closer look at the encounter.

N’Golo Kante misses out once again for Chelsea. (Photo by Adrian Dennis/AFP via Getty Images)

Heading into the fixture, the big talking point around Chelsea invariably surrounds the managerial picture and how they will go about their revival in the second half of the season. However, not a lot has changed on the team news front, with N’Golo Kante still the only player unavailable ahead of the game against Wolves.

Kante is still recovering from a hamstring injury and is still some way off returning to the field. With a near-full strength up for selection, what will be interesting to see is the formation of choice. With Thomas Tuchel set to take charge of Chelsea, it is likely that he will keep things simple and line his side up in a 4-3-3 formation against Wolves.

Edouard Mendy ought to be stationed in goal, with two interesting choices likely in defence. Cesar Azpilicueta could start ahead of Reece James in the right-back slot, with Ben Chilwell a certainty on the left flank. At the heart of the Chelsea defence, Antonio Rudiger, who was a target for Tuchel at PSG, is likely to pair up with Thiago Silva.

Up ahead in midfield, Mason Mount – a Frank Lampard favourite – should keep hold of his spot, considering his importance to the side on the creative front. Kai Havertz, one of the players looking for a lease of life at Chelsea, could start in the middle of the park, while Jorginho should dictate play from a deeper position on the field.

Finally, in attack, it will be interesting to see who gets the opportunity to lead the line for Chelsea against Wolves. Timo Werner could be the central striker, despite his indifferent form, with Hakim Ziyech and Christian Pulisic being the two wide men. 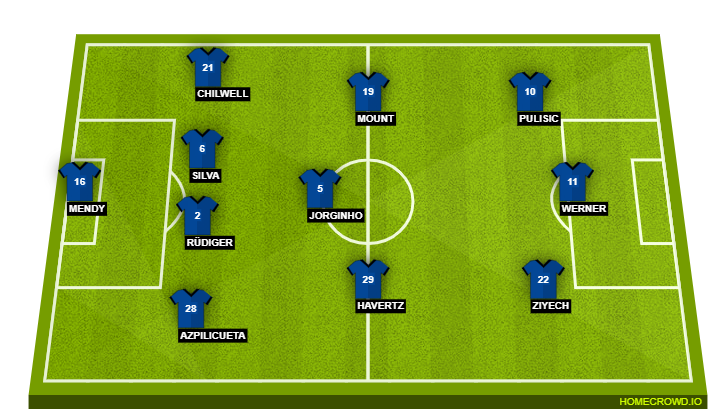 Nuno Espirito Santo does not have any fresh roster issues hampering his preparations ahead of the visit of Chelsea. On Wednesday, the Wolves manager will be bereft of the services of as many as four first-team players due to various fitness problems.

Raul Jimenez (head) and Jonny Otto (knee) remain long-term absentees for Wolves, while Marcal continues to be on the sidelines as well. In addition, Daniel Podence is closing in on his return after recovering from a calf injury, but the game has come too soon for the Portuguese forward.

In another piece of disconcerting news for Nuno, new signing Willian Jose is likely to miss the game against Chelsea as he awaits his work permit. In his absence, Fabio Silva will get one more chance to impress against Chelsea before having to contest for the central striker’s spot.

The young striker will be flanked by Adama Traore and Pedro Neto, who are automatic picks in the final third owing to the continued absence of Podence. The duo will aim to be direct when Wolves unleash counter-attacking moves on Chelsea and will be largely fed by the midfielders behind them.

Speaking of the midfielders, with Wolves likely to line up in a 4-3-3 once again versus Chelsea, the first-choice trio of Joao Moutinho, Ruben Neves and Leander Dendoncker pick themselves in the middle of the park. Moutinho will sit deep, aiming to keep the midfield unit organised when behind the ball, with Neves and Dendoncker providing defensive support.

At the back, the versatile Roman Saiss will continue as the left-back, but will largely support Willy Boly and Conor Coady at the heart of the Wolves defence, which will have a lopsided back-three look, with Nelson Semedo having more freedom to charge higher up the pitch. In goal, there is no looking past Rui Patricio. 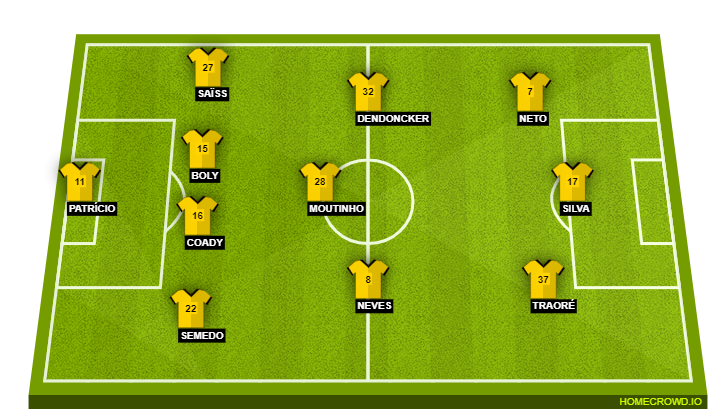 It would not be an understatement to say that Timo Werner has flattered to deceive at Chelsea so far. Having arrived at Stamford Bridge on the back of a memorable campaign with RB Leipzig, expectations were understandably high from the German striker. However, he has just not been able to make the desired impact at the club.

That Frank Lampard tinkered with his positions a number of times hardly helped matters for him. Now set to play under compatriot Thomas Tuchel, Werner might get a new lease of life at Chelsea, and he will surely be eager to impress the incoming manager, especially as he looks to end his ridiculous goal drought.

Having said that, despite all the struggles, only one Chelsea player has scored more goals than Werner this season, and a gentle push is all he really needs to get going again. With a lot to prove, how Werner fares against Wolves will set the tone for the rest of his campaign and he will be raring to impress.

We often talk about the famous new manager bounce and that should once again be in play when Chelsea host Wolves on Wednesday. Thomas Tuchel is set to be in the dugout following the announcement of his appointment on Tuesday; and in Wolves, he has one of the perfect opponents to get Chelsea back on track.

Indeed, apart from beating Chelsea last month, Wolves have largely been dreadful, claiming just five points since the start of December, with only bottom club Sheffield United faring worse. So, while Chelsea appear to be in all sorts of trouble, Wolves are no less, with their struggles to keep a clean sheet also being well documented. This should be a closely-contested affair, with Chelsea eking a 1-0 win.