Barcelona will aim to keep pace with rivals Atletico Madrid and Real Madrid when they take on Elche at Estadio Manuel Martinez Valero on Sunday.

The second half of the 2020/21 La Liga season is underway, with Matchday 20 kicking off on Friday. As many as four matches will be on show in the competition on Sunday, with Barcelona taking the field on the day as well, locking horns with Elche at Estadio Manuel Martinez Valero.

Elche began their first season back in La Liga for half-a-decade in solid fashion, losing just two of their first 10 games this term. However, Jorge Almiron’s men have now failed to win each of their last 12 matches, a run of results that has left them 18th on the table. However, Los Franjiverdes do have a couple of games in hand over the teams around them and know that a win could take them to the relative safety of mid-table.

Barcelona, on the other hand, have recovered reasonably well from a slow start to life under Ronald Koeman. While the Blaugrana did lose the Supercopa de Espana final last weekend, they have not been beaten in La Liga for nearly seven weeks now – a run of eight games without defeat. This solid run has propelled them up to third on the table, a solid base to build the second half of the season on.

Barcelona cruised to a 6-0 win the last time Elche hosted them in La Liga, back in 2015, with Lionel Messi, Gerard Pique, Neymar and Pedro on target for the Catalans. Ahead of the latest meeting between the two sides, The Hard Tackle takes a closer look at the encounter.

Jorge Almiron has been handed a major boost on the team news front ahead of the visit of Barcelona. On Sunday, the Elche manager will be bereft of the services of five first-team players but is also set to welcome back a key squad member to the starting lineup.

Ivan Marcone is available once again after serving his one-match suspension and should return to the midfield straightaway. The likes of Dani Calvo, Luismi, Omenuke Mfulu, Fidel and Guido Carrillo, though, remain on the sidelines owing to their respective fitness issues.

Edgar Badia is expected to be stationed in goal against Barcelona, with Elche likely to line up in a 3-4-3 formation, moving away from the midfield diamond setup last time out against Real Valladolid. This is due to the return of Marcone, who shores up the defensive side of things in the middle of the park.

Marcone will likely have Raul Guti for company in the middle of the park, with the duo majorly staying compact in behind the ball in order to deny Barcelona any room in the half-spaces, keeping a check on creative chiefs Frenkie de Jong and Pedri. The forward thrust will, thus, be provided by the wing-backs – Antonio Barragan and Johan Mojica.

The wide duo will also fall back at a rapid pace on the transitions, looking to create a back five, which will allow the three centre-backs – Gonzalo Verdu, Diego Gonzalez and Josema – to remain compact, which will, in turn, keep Barcelona’s front-men isolated as much as possible.

Finally, in attack, Emiliano Rigoni and Josan will be the two wide men who will look to veer infield and bombard the Barcelona centre-backs, thereby allowing central striker Lucas Boye to burst into space to look for scoring opportunities. 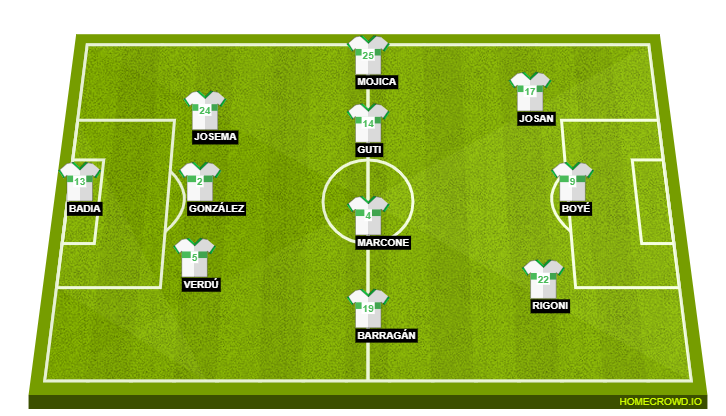 The big update on the team news front for Barcelona ahead of the trip to Estadio Manuel Martinez Valero is the result of their appeal against the two-match ban handed to captain Lionel Messi after his dismissal against Athletic Bilbao in the Supercopa de Espana final. Ronald Koeman will, thus, have to make do without six first-team players against Elche on Sunday.

Apart from the Barcelona captain, the likes of Gerard Pique, Sergi Roberto, Philippe Coutinho and Ansu Fati remain on the sidelines, with the quartet also being joined by Sergino Dest in the list of the players that are unavailable for the weekend fixture versus Elche.

In Dest’s absence, Oscar Mingueza will feature on the right side of the Barcelona defence, having shown some promise as a full-back recently. On the opposite flank, Jordi Alba is a certainty, while Ronald Araujo and Clement Lenglet will form the central defensive partnership. Behind them, Marc-Andre ter Stegen is an automatic choice between the sticks.

In front of ter Stegen, Barcelona will assume a 4-3-3 setup, which will essentially morph into a 4-1-4-1 during the offensive phases. Sergio Busquets, who has been in resurgent form lately, will be stationed at the base of the midfield, with defensive support coming from Frenkie de Jong and Pedri.

Pedri and de Jong will also have all the creative onus on them in the absence of Messi, while Antoine Griezmann will need to step up in attack. Ousmane Dembele, who made a great deal of difference in the Copa del Rey tie against Cornella this week, will start on the left flank, with Martin Braithwaite certain to lead the line for Barcelona versus Elche. 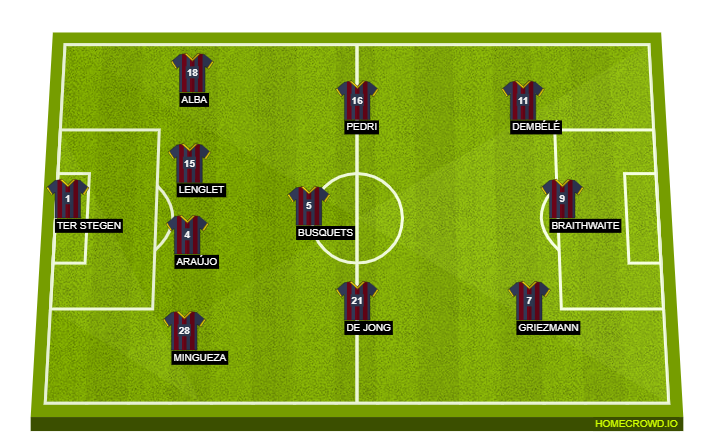 2020/21 has been yet another season wherein Antoine Griezmann has blown hot and cold as a Barcelona player. Just when you think that the Frenchman is starting to turn a corner, he produces a string of performances that leave a lot to be desired once again.

While he can never be faulted for a lack of effort, the end product and clinical touch is just not there for stretches, which has to be frustrating for him and everyone associated with Barcelona. However, with Lionel Messi missing against Elche, Griezmann has to shoulder the bulk of the responsibility in the final third and make himself count. A big game for the 2018 FIFA World Cup winner.

This is a game that, on paper, looks like a fixture that should be a cakewalk for Barcelona. After all, the Blaugrana tend to be quite comfortable when playing against the minnows, whose home form of late has been quite underwhelming. Having said that, Elche do boast quite a solid defensive record.

With Lionel Messi suspended, Barcelona will not have that cutting edge to slice open the opposition defence at will. However, as the minutes tick by, the gulf in quality should start to shine through, with Frenkie de Jong and Pedri making a difference, while Antoine Griezmann should pull his act together. With that in mind, The Hard Tackle predicts a 2-0 win for Ronald Koeman & co.