Inter Milan will be eager to keep pace with Serie A leaders AC Milan when they take on Udinese at Stadio Friuli on Saturday.

The action continues to be relentless all across Europe and in Serie A, we are set to reach the midway stage of the 2020/21 season with Matchday 19. One of the big games this weekend will be played at Stadio Friuli, where Udinese will play hosts to Inter Milan, with huge stakes on both ends of the table.

Udinese have endured an underwhelming Serie A campaign so far in 2020/21, managing to win just 4 of their opening 18 games to sit perilously close to the drop zone. The Zebrette are currently 15th on the table, just four points ahead of 18th-placed Torino, although they would take heart from their efforts in the 1-1 draw with Atalanta earlier this week.

Inter Milan, on the other hand, come into this weekend’s fixture after a near one-week layoff, with their most recent encounter being the crucial win over Juventus this past Sunday. That result meant that the Nerazzurri kept pace with Serie A leaders AC Milan, who are three points ahead of them as things stand.

The corresponding fixture last season saw Inter Milan run out 2-0 winners over Udinese, courtesy a second-half brace from Romelu Lukaku. Ahead of the latest meeting between the two sides, The Hard Tackle takes a closer look at the encounter.

Luca Gotti does not have any fresh injury concerns hampering his preparations ahead of the visit of Inter Milan. On Saturday, the Udinese manager will be bereft of the services of four first-team players, with attack, in particular, being in a rather distressed state.

The likes of Fernando Forestieri (thigh), Ignacio Pussetto (knee) and Stefano Okaka (hamstring) all remain on the sidelines, meaning Gotti will be forced to alter the 3-5-2 formation to take the shape of a 3-5-1-1 once again versus Inter Milan. Apart from the aforementioned trio, long-term absentee Mato Jajalo also remains unavailable.

Kevin Lasagna will lead the line for Udinese, with Roberto Pereyra, who has shown an upturn in form in recent games, playing off of him. The duo will pose the bulk of the goalscoring threat against Inter Milan, with Rodrigo De Paul, who has been heavily linked with Liverpool lately, pulling the strings for the hosts.

Gotti was quizzed about the fitness of Bram Nuytinck and Walace during his pre-match presser as well, with the duo set to face late fitness tests to determine their availability. Walace, in particular, might not be risked, meaning Rolando Mandragora will be stationed at the base of the midfield, with defensive support coming from Tolgay Arslan.

Jens Stryger Larsen and Marvin Zeegelaar will be tasked with providing the width higher up the pitch against Inter Milan, but the duo will also get pinned back to create a back five during the defensive phases, supporting the three centre-backs – Rodrigo Becao, Samir and Kevin Bonifazi. In goal, there is no looking past Juan Musso. 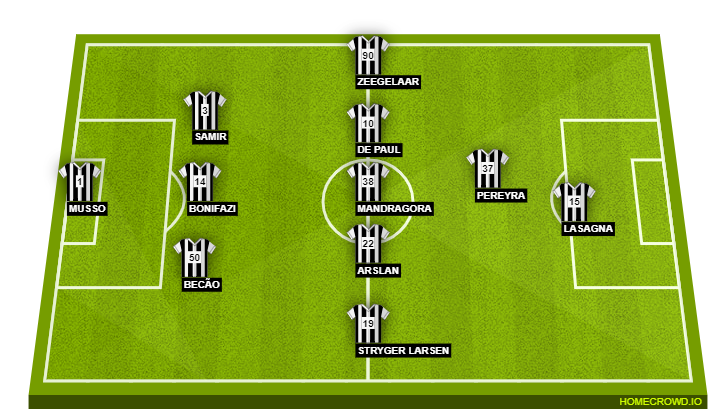 Unlike his counterpart in the Udinese dugout, Antonio Conte has a near full-strength squad at his disposal ahead of the trip to Stadio Friuli. On Saturday, the Inter Milan manager will have to make do without just one first-team player, with Danilo D’Ambrosio recovering from a knee injury.

Otherwise, Inter Milan have no one else on the sidelines, with Matias Vecino recently rejoining full training. Conte, though, is believed to be sweating over the fitness of Alexis Sanchez due to the recent niggles with his thigh, meaning he will not get the opportunity to give his first-choice strikers a breather ahead of the big Coppa Italia game against AC Milan next week.

Romelu Lukaku and Lautaro Martinez will indeed form the strike partnership yet again and will hope to continue their fine run of form. Behind them, the key man for Inter Milan will be Nicolo Barella, who was simply delightful last time out against Juventus.

Barella will be the chief creator for Inter in the middle of the park, with Marcelo Brozovic and Arturo Vidal shoring up the defensive side of things. Brozovic, though, will be a factor in set-piece situations. Out wide, Achraf Hakimi and Ashley Young will hold the key with their deliveries, with the former, in particular, growing in stature in recent weeks.

At the back, there is no looking past Milan Skriniar, Stefan de Vrij and Alessandro Bastoni, who is reportedly in line for a bumper new deal following an impressive first half of the season. Finally, Samir Handanovic is the automatic pick between the sticks for Inter Milan. 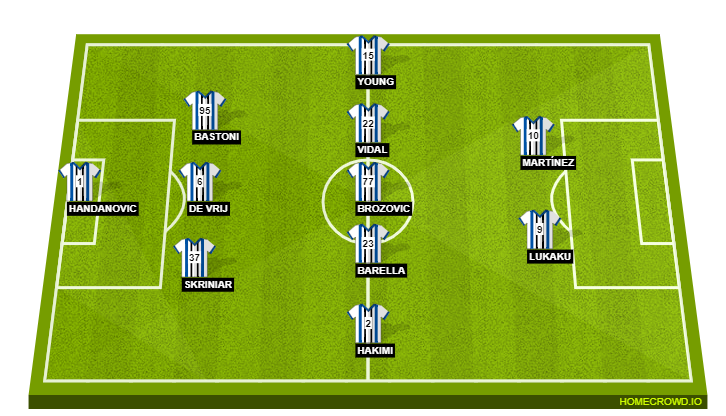 In a season that has seen Inter Milan continually be in the ascendancy following a rather patchy first couple of months, no player has been more crucial for them than Nicolo Barella. While Romelu Lukaku remains the difference-maker in the final third and Lautaro Martinez continues to regain his form, it is Barella who has been key in providing them with the required control in midfield.

This season, though, he has added even more layers to his game, scoring six times already in Serie A so far. The last Italian midfielder at Inter to score more in a single season was Nicola Berti in 1988/89 (7) and Barella, who has recently been linked with Real Madrid and Liverpool, is on the cusp of equalling that record.

With Martinez still not at his prolific best, Antonio Conte might once again look at Barella to deliver the goods in the final third. More importantly, it will be up to the Italian international to help assert Inter Milan’s authority over Udinese on Saturday, which if done properly could help them reserve their energy levels as much as possible ahead of the big game against AC Milan.

This is a game that is unlikely to be a walk in the park for Inter Milan, despite all the factors going against Udinese. Yes, the Zebrette have a record to forget against the Nerazzurri in recent years and are closer to the relegation zone than the European places.

At the same time, though, with one eye on the big Coppa Italia tie against AC Milan, Inter might not be at full flow at Stadio Friuli on Saturday. That could mean that Udinese’s barren run in front of goal versus Inter ought to end this weekend. However, the form of Romelu Lukaku and Nicolo Barella means that the visitors will have more than enough quality to get all three points.