Juventus will be desperate to return to winning ways in Serie A when they welcome Bologna to the Allianz Stadium on Sunday.

The 2020/21 Serie A season will officially reach its halfway mark on Sunday, with Matchday 19 set to come to an end. Five matches are on show on the day, with the action beginning at the home of the reigning champions, as Juventus play hosts to Bologna at the Allianz Stadium.

Juventus have been quite inconsistent in their maiden campaign under the tutelage of Andrea Pirlo, whose methods have not produced the most ideal of results at times. As things stand, the Bianconeri sit 5th in the Serie A standings, having managed to win just 9 of their 17 games till date.

The defending champions, though, will be brimming with confidence after winning the first trophy of the season this week, having beaten Napoli to lift the Supercoppa Italiana. Bologna, on the other hand, have blown hot and cold, winning just 5 of their opening 18 league games and are 12th on the table. The Rossoblu, though, come into this game having ended ended a run of eight games without a win last weekend.

The corresponding fixture last season saw Juventus eke out a narrow 2-1 win over Bologna, with Miralem Pjanic scoring the winner after Cristiano Ronaldo’s early strike had been cancelled out by Danilo Larangeira. Ahead of the latest meeting between the two sides, The Hard Tackle takes a closer look at the encounter.

Andrea Pirlo does not have any fresh roster issues hampering his preparations ahead of the visit of Bologna. On Sunday, the Juventus manager will be bereft of the services of as many as six first-team players due to injuries or illness.

Defence, in particular, presents a great deal of concern for Pirlo, with Matthijs de Ligt and Alex Sandro recovering from COVID-19 while Gianluca Frabotta (ankle) and Merih Demiral (match fitness) are on the treatment tables. In addition, Paulo Dybala (knee) is another major absentee for Juventus while Franco Israel (head) misses out as well.

With Pirlo pretty much down to his bare bones in the defensive department, the back four of Juan Cuadrado, Danilo, Leonardo Bonucci and Giorgio Chiellini pick themselves. The full-backs will play unique roles, with Danilo staying back for the most part to support the central defenders while Cuardrado will act as a wing-back.

On the left flank, the auxiliary wing-back will likely be Federico Chiesa, meaning the right midfielder – likely to be Aaron Ramsey – will tuck in and act as a box-to-box midfielder, allowing Rodrigo Bentancur to play the Anchor Man role and Arthur to reprise his usual creative role.

Finally, the absence of Dybala means that Alvaro Morata is a certainty to pair up with Cristiano Ronaldo in Juventus’s strike partnership, with Dejan Kulusevski being a backup attacking option on the bench against Bologna. 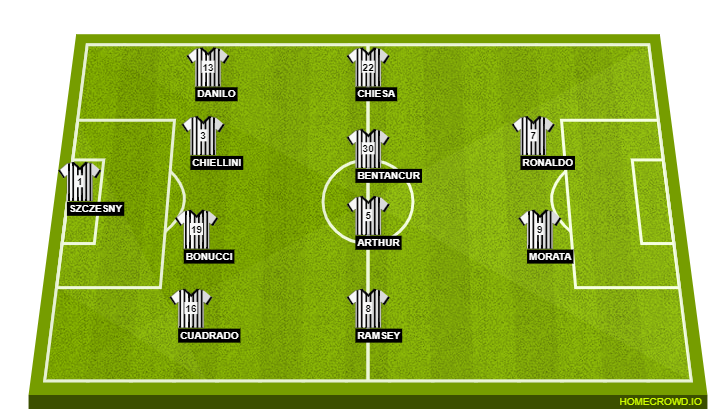 Like his counterpart in the Juventus dugout, Sinisa Mihajlovic is not being bogged down by any fresh injury issues ahead of the trip to the Allianz Stadium. On Sunday, the Bologna boss will have to make do without just three first-team players.

Ibrahima Mbaye (hamstring), Gary Medel (muscle injury) and Federico Santander (knee) all remain on the sidelines, but Mihajlovic has enough cover within his squad to cover for the absence of the aforementioned trio.

Lukasz Skorupski will be stationed between the sticks for the visitors, who will line up in the usual 4-2-3-1 formation in front of him. Captain Danilo will have Takehiro Tomiyasu as the heart of the Bologna defence, with Lorenzo De Silvestri and Mitchell Dijks being the two full-backs.

The wide duo will have the responsibility of providing width higher up the pitch, which will allow the two wingers to veer infield and create overloads in the central areas. One of the aforementioned wingers, Riccardo Orsolini will be the man under the spotlight for Bologna, as he looks to put former side Juventus to the sword on Sunday.

Orsolini will take up the right wing berth, with Musa Barrow lining up on the left flank, looking to provide company to Rodrigo Palacio centrally and creating a strike partnership of sorts. Meanwhile, Roberto Soriano will reprise the no. 10 role but will drop back to create a three-man midfield during the defensive phases, providing support to Mattias Svanberg and Jerdy Schouten. 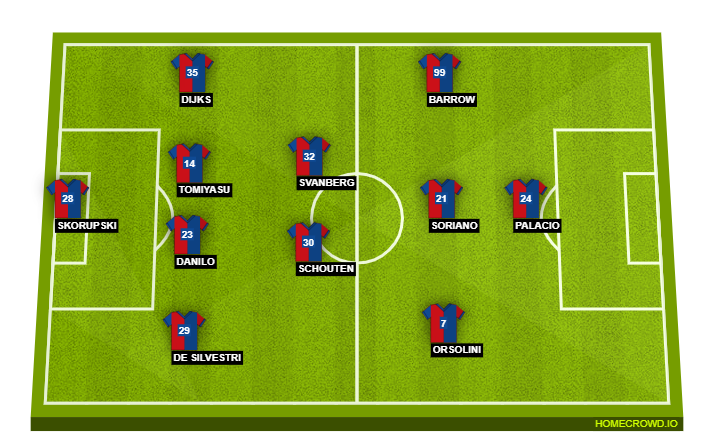 In a season that has been marred by a lot of inconsistencies, the only constant has been Cristiano Ronaldo’s top-class form, at least for the most part. The Juventus talisman will have been smarting from a sub-par display against Inter Milan last weekend and that showed in the Super Cup tie, as he inspired Juventus to lift the trophy earlier this week.

The Serie A top scorer will now be intent on getting the job done in the league, as he Juventus look to enter the second half of their campaign with momentum behind them. With those around him hardly being prolific, it goes without saying that Andrea Pirlo will need Ronaldo to be at his very best if Juventus are to return to winning ways in Serie A on Sunday.

Juventus might have flattered to deceive so far in their 2020/21 Serie A campaign, but their dominance and stronghold over Bologna is undeniable. The Bianconeri just do not lost to their visitors on Sunday, at least not in the past decade or so.

Sinisa Mihajlovic & co. hardly have any form behind them either to push their hosts in this game and with Cristiano Ronaldo looking in fine touch, it could end up being another game to forget for the Rossoblu. With that in mind, The Hard Tackle predicts a largely straightforward outing for Juventus, who should win this game 2-0.