Chelsea will be aiming to get their Premier League campaign back on track when they take on Leicester City at the King Power Stadium on Tuesday.

The games continue to come thick and fast all across Europe and in the Premier League, the elongated Gameweek 19 of the 2020/21 season resumes this midweek. On Tuesday, the big game of the week will be played at the King Power Stadium, where Leicester City play hosts to a stuttering Chelsea side.

Leicester City are once again in the thick of the battle for the top four race, with leaders Manchester United not too far ahead of them either. The Foxes are currently third on the Premier League table, level on points with second-placed Manchester City. Currently on a five-game unbeaten run in the top-flight, Brendan Rodgers & co. come into this fixture on the back of a hard-fought win over Southampton.

Chelsea, on the other hand, have tailed off dramatically following a strong start to their Premier League campaign. A part of the leading pack in the competition not too long ago, the Blues have been on a free fall since the middle of December. Indeed, in the past month or so, Frank Lampard’s men have won just two of their seven league games, one of those coming this past weekend versus Fulham.

The corresponding fixture last season was an engrossing affair that ended in a 2-2 draw between Leicester and Chelsea, with Harvey Barnes, Ben Chilwell and Antonio Rudiger the goalscorers. Ahead of the latest meeting between the two sides, The Hard Tackle takes a closer look at the encounter.

Brendan Rodgers has a near full-strength squad at his disposal. (Photo by Catherine Ivill/Getty Images)

Brendan Rodgers does not have any fresh injury concerns hampering his preparations ahead of the visit of Chelsea. On Tuesday, the Leicester City manager will be without just one first-team player, with Dennis Praet recovering from a thigh injury that will keep him on the sidelines till April.

In some bit of good news, Nampalys Mendy could be available for selection after recovering from a strain in his neck. The Frenchman, though, will have to suffice with a place on the bench, with Wilfred Ndidi the preferred choice in the holding midfield role.

More crucially, Jamie Vardy, whose minutes have had to be managed quite a bit lately due to a persistent hip problem, should be fit enough to lead the line for his side in the crucial game against Chelsea, with any possible rest likely to be afforded on the weekend in the FA Cup clash versus Brentford.

Vardy’s typical movement, however, might be a tad bit restricted, which will put the onus on the likes of Harvey Barnes and James Maddison to put in the hard yards higher up the pitch. Marc Albrighton will also be another player whose end product will be key in the final third and his crosses will need to be inch-perfect for Vardy.

Youri Tielemans will occupy a deeper role in midfield once again, looking to pull the strings in the middle of the park and asserting Leicester’s control in the game over Chelsea. The Belgian will be partnered by Ndidi, whose primary task will be to cut out Mason Mount’s passes while generally keeping things tight in the middle.

At the back, Jonny Evans and Wesley Fofana, who continues to be rated quite highly from all quarters, will form the central defensive partnership while Timothy Castagne and James Justin will once again be the full-back pairing, with the duo’s output in the final third being quite crucial. In the Leicester goal, there is no looking past Kasper Schmeichel. 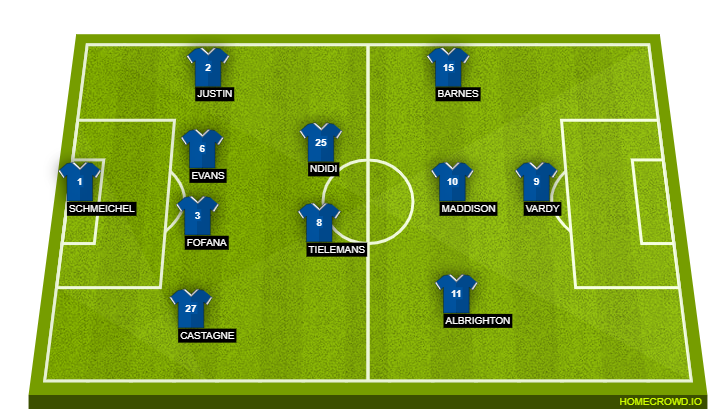 Like his counterpart in the Leicester City dugout, Frank Lampard is not being bogged down by any fresh roster issue heading into the midweek fixture at the King Power Stadium. On Tuesday, the Chelsea manager will have to make do without just one first-team player.

Former Leicester midfielder N’Golo Kante, who has served a one-match ban, misses out with a hamstring injury and is the only Chelsea player currently on the sidelines. That means that Danish centre-back Andreas Christensen is back at Lampard’s disposal, which is crucial, seeing as Fikayo Tomori is on the verge of joining AC Milan on loan.

Christensen, though, is not expected to start, with Kurt Zouma likely to return to the heart of the Chelsea defence to pair up with Thiago Silva. Another change at the back should see Reece James come in for Cesar Azpilicueta, with Ben Chilwell a certainty on the left flank.

James and Chilwell will have the creative onus on them in the final third while also being tasked with considerable defensive duties up against the tricky Harvey Barnes and Marc Albrighton. In between the sticks, Edouard Mendy picks himself ahead of Kepa Arrizabalaga.

Kante’s absence means that Jorginho should start at the base of the three-man midfield once again, with the Italian international having the responsibility of setting the tempo of the game and putting Chelsea in control. Mateo Kovacic will be the workhorse in the middle of the park, with Mason Mount aiming to provide the creative impetus from midfield.

Finally, in attack, a couple of changes could be in the offing. Callum Hudson-Odoi is due a recall following some promising comments by Lampard. The English international ought to start ahead of Timo Werner and Christian Pulisic on the left flank, with Hakim Ziyech starting on the right-wing, while Tammy Abraham will spearhead the Chelsea attack against Leicester. 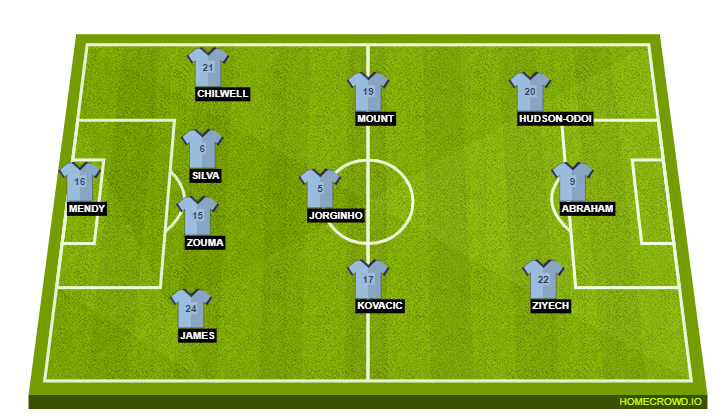 Can Vardy get back to his best? (Photo by Catherine Ivill/Getty Images)

Timo Werner’s goal drought will constantly make him one of the players to watch in a game that Chelsea play. However, on Tuesday, the spotlight will once again fall on the ageless wonder that is Jamie Vardy, who has once again set the Premier League alight, despite being well into his 30s.

This season, however, it looks like age might gradually be starting to catch up the Englishman, who has been bothered a lot by a niggling hip injury. How he deals with the persistent issue on Tuesday will go a long way in determining the final outcome of the game, especially with Chelsea themselves struggling to pose a huge deal of threat in the final third lately. A big game for Vardy and Leicester.

This is a hard one to call, especially considering Leicester City’s record at the King Power Stadium this season and Chelsea’s recent form. Having said that, the Foxes are currently riding a wave of confidence amid a six-game unbeaten run in all competitions, whereas Chelsea struggled to get past a ten-man Fulham side this past weekend.

Jamie Vardy’s disconcerting hip problem will surely be a concern for Brendan Rodgers, but right now, he has more than enough quality in his side to get past the Blues, even if narrowly so. The Hard Tackle predicts another close contest between the two sides, with Leicester likely to eke out a 2-1 win over Chelsea this time around.