AC Milan will hope to consolidate their place atop the Serie A table when they take on Cagliari at Sardegna Arena on Monday.

The 2020/21 Serie A season is about to reach its halfway mark, with Matchday 18 of the 2020/21 campaign set to be concluded on Monday. The final game of the ongoing round of fixtures will be played at the Sardegna Arena, where Cagliari will be playing hosts to table-toppers AC Milan.

Cagliari have endured a difficult 2020/21 campaign, having managed to win just three of their 17 games till date. A poor first half of the season has meant that the Isolani lie perilously close to the drop zone, with 18th-placed Genoa level on points with them and with a slightly inferior goal difference. Eusebio Di Francesco & co. are currently on a ten-game winless run, with their last win coming back in November.

AC Milan, on the other hand, have been the pacesetters in Serie A, pretty much from the get-go, having lost just one of their opening 17 games of the season. With the upturn in their fortunes under Stefano Pioli continuing, the Rossoneri look primed for a title onslaught this term.

The corresponding fixture last season saw AC Milan run out 2-0 winners at Cagliari, with Rafael Leao and Zlatan Ibrahimovic on target for the Rossoneri. Ahead of the latest meeting between the two sides, The Hard Tackle takes a closer look at the encounter.

Eusebio Di Francesco does not have any fresh roster issues hampering his preparations ahead of the visit of AC Milan. On Monday, the Cagliari manager will be bereft of the services of six first-team players due to a myriad of issues.

Marko Rog is a long-term absentee due to a knee injury that has brought his season to a premature halt. Apart from the Croat, Di Francesco will also be unable to call upon the likes of Zito Luvumbo (muscle injury), Paolo Farago (thigh), Andrea Carboni (coronavirus) and Ragnar Klavan (coronavirus), while Nahitan Nandez is out due to a suspension.

The absence of Nandez means that Radja Nainggolan and Razvan Marin will likely pair up in the middle of the park, with Cagliari likely to be set up in a 4-2-3-1 formation. Nainggolan will look to disrupt play in the middle of the park but will also aim to provide the forward thrust. Captain Joao Pedro will come in to reprise the no. 10 role, looking to carve out the openings higher up the pitch.

Pedro will likely be supported by Adam Ounas and Riccardo Sottil from the wide areas, with the duo veering infield to create overloads centrally. Meanwhile, Giovanni Simeone will lead the line for Cagliari against AC Milan.

At the back, Diego Godin will pair up with Sebastian Walukiewicz at the heart of the Cagliari defence, with Charalampos Lykogiannis and Gabriele Zappa being the two full-backs. In goal, there is no looking past Alessio Cragno. 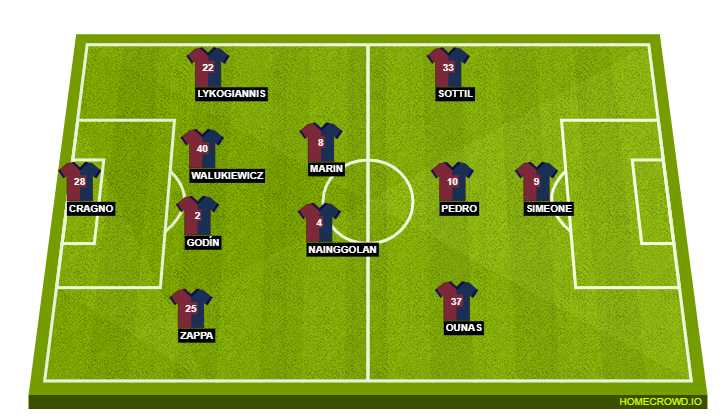 Unlike his counterpart in the Cagliari dugout, Stefano Pioli is not getting any respite when it comes to updates on the team news front. On Monday, the AC Milan manager will have to make do without as many as five first-team players.

Rafael Leao is a fresh absentee for Milan due to a suspension, incurred after an accumulation of yellow cards. Apart from Leao, Pioli is also missing out on Ante Rebic, Ismael Bennacer, Matteo Gabbia and Rade Krunic, with the quartet expected to return in a couple of weeks.

Gianluigi Donnarumma is a certainty in goal and AC Milan will be set up in a 4-2-3-1 formation by Pioli. Alessio Romagnoli and Simon Kjaer are the central defensive pairing when both are available, with Theo Hernandez and Davide Calabria being the preferred full-backs. Both of them will pose a threat going forward down their respective flank.

Up ahead in midfield, Sandro Tonali picks himself as Franck Kessie’s partner, owing to the absence of Bennacer. In front of the double pivot, Hakan Calhanoglu will be stationed in the free role behind the striker, with the Turk set to get the license to pull the strings from advanced positions.

Finally, in attack, Brahim Diaz, who has looked promising of late, should be deployed on the left-wing, with Samu Castillejo taking his place on the right flank. And, the fit again Ibrahimovic will spearhead the AC Milan attack against Cagliari. 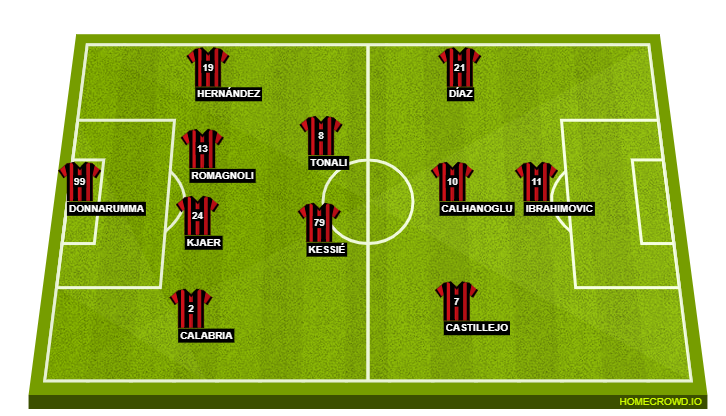 Are we set for a Zlatan special? (Photo by Marco Luzzani/Getty Images)

It has been a difficult season so far for Zlatan Ibrahimovic, who has been pegged back by injuries and a positive coronavirus test. However, now that he is finally back in the fold, his output will need to be at its highest level in order to keep AC Milan firmly atop the Serie A table. One can expect the veteran Swede to shoulder the responsibility and a Zlatan blitzkrieg could be in the offing.

Things are hardly improving for Cagliari, whose winless run should be extended further when Serie A leaders AC Milan pay them a visit on Monday. The Rossoneri have been quite efficient in their displays and a game against one of the worst teams in the competition is just what they need to get some added rhythm. The Hard Tackle, therefore, predicts a 2-0 win for Stefano Pioli’s men.