Manchester City will be hoping to close the gap to the top of the Premier League table when they welcome Crystal Palace to the Etihad on Sunday.

The games continue to come thick and fast in the Premier League and we are set to reach the mid-point of the ongoing season with Gameweek 19. All eyes will be on the big match between Liverpool and Manchester United earlier in the day before Sunday’s proceedings end at the Etihad, where Manchester City will be playing hosts to Crystal Palace.

Manchester City have turned things around superbly after a wobbly start to the 2020/21 season. In the Premier League, the Cityzens were briefly languishing in the bottom half of the table before their recent resurgence kicked into effect. This upturn in form has ensured a rapid climb up the table, with Pep Guardiola & co. up to third following their 1-0 win over Brighton & Hove Albion this week.

Crystal Palace, on the other hand, have blown hot and cold all through the season so far, having managed to win just six of their 18 games till date. However, the Eagles’ form in recent weeks has been somewhat decent. Roy Hodgson’s men have lost just two of their last eight Premier League matches, earning a creditable 0-0 draw with Arsenal last time out.

The corresponding fixture last season saw Crystal Palace hold Manchester City to a 2-2 draw, courtesy of a last-minute own goal by Fernandinho. Ahead of the latest meeting between the two sides, The Hard Tackle takes a closer look at the encounter.

Pep Guardiola does not have any fresh roster issues hampering his preparations ahead of the visit of Crystal Palace. On Sunday, the Manchester City manager will be bereft of the services of just three first-team players in the worst-case scenario.

Sergio Aguero is a certain absentee as he is isolating after coming in close contact with someone who has tested positive for COVID-19. Aymeric Laporte and Nathan Ake are on the recovery trail, but the visit of Crystal Palace comes too soon for them. Manchester City, though, are set to welcome Eric Garcia back in contention after recovering from the coronavirus.

However, Garcia, whose future at Manchester City remains highly uncertain, is unlikely to start, with John Stones and Ruben Dias expected to continue their solid central defensive partnership. Kyle Walker and Benjamin Mendy ought to return as the two full-backs, with Ederson taking his place in goal.

While Mendy will aim to pose a constant threat down the left flank, Walker will often tuck in and support Rodri in midfield while also being an outlet on his wing at times. Rodri, as usual, will essay the holding midfield role, with Walker’s tendency to tuck in giving his midfield partner, Ilkay Gundogan the license the charge forward and join in on the attacks.

Kevin De Bruyne will once again hold the key, as he looks to pull the strings higher up the pitch. Phil Foden, who is Manchester City’s top scorer this season, will be one of the two wide men along with Raheem Sterling. The duo will veer infield more often than not and will pose a great deal of threat in and around the Crystal Palace box. Finally, Gabriel Jesus will lead the line for City. 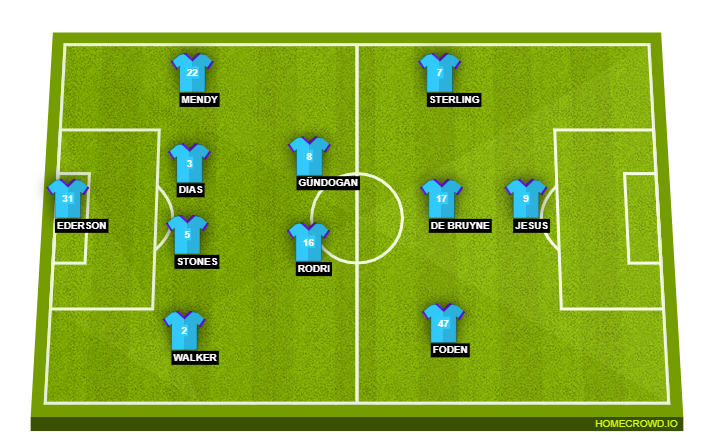 Like his counterpart in the Manchester City dugout, Roy Hodgson does not have any fresh concerns to contend with ahead of the trip to the Etihad. On Sunday, the Crystal Palace manager will have to make do without six first-team players but has also welcomed back a couple of members of his squad.

The likes of Wayne Hennessey, Mamadou Sakho, Nathan Ferguson, Martin Kelly, Jeffrey Schlupp and Connor Wickham all miss out for Crystal Palace due to their respective issues. However, the veteran manager is also set to greet the return of Scott Dann and Gary Cahill, both of whom have recovered from their respective injuries.

Vicente Guaita will assume his customary spot between the sticks, with Crystal Palace set to line up in a 4-4-2 formation against Manchester City. While Dann and Cahill are available, Cheikhou Kouyate will remain James Tomkins’ partner at the heart of the Palace defence, with Joel Ward and Tyrick Mitchell being the full-back pairing.

Up ahead in midfield, James McArthur and Luka Milivojevic will hold the key with their task of keeping a lid on Kevin De Bruyne’s output. Andros Townsend and Eberechi Eze will be two wide men for Crystal Palace, with the duo expected to take on the potentially vulnerable full-backs. Finally, Christian Benteke and talisman Wilfried Zaha will form the strike partnership, 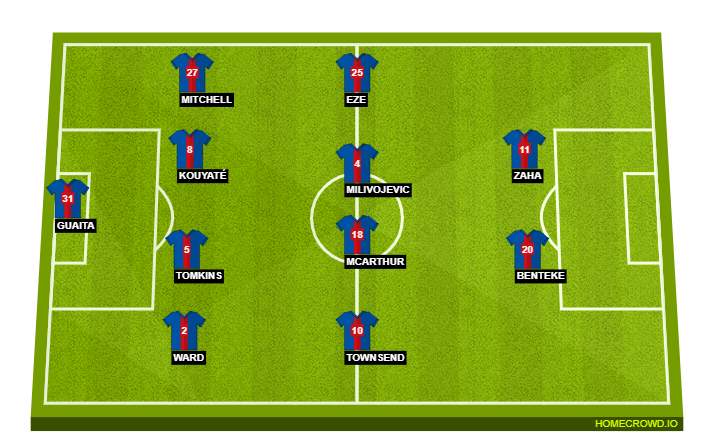 Man in form. (Photo by Oli Scarff/AFP via Getty Images)

In a season that has seen Manchester City slowly get to their best levels, the inability to be clinical in front of goal is what hurt them the most. With Sergio Aguero unavailable for the most part and Gabriel Jesus blowing hot and cold, the rest of the players have had the pressure on them to deliver the goods in front of goal. A major chunk of the goals have come from the unlikeliest of sources.

While Phil Foden has been highly regarded as one of the most promising young players in England, very few would have envisioned him being Manchester City’s top scorer at this stage of the season. These exploits, though, have helped him get close to being an indispensable figure, and as City look to close the gap to the top, it is his output that will now start to hold the key. Will Foden handle the added responsibility well?

Manchester City have an advantage before they face Crystal Palace, in that they will already know the result of the game between Liverpool and Manchester United before they take the field. Either way, though, the Cityzens will dominate the proceedings against the Eagles while being extremely solid at the back.

Phil Foden will once again be under the spotlight but Raheem Sterling and Gabriel Jesus need to step up. In the end, Manchester City should be fairly comfortable, with The Hard Tackle predicting a 2-0 win for Pep Guardiola’s charges over Manchester City.