The first Derby della Capitale of the season is finally upon us as Lazio get set to take on AS Roma at Stadio Olimpico in Serie A on Friday.

The action across Europe continues to come at breakneck speed for us, and Matchday 18 of the 2020/21 Serie A season begins on Friday with a blockbuster clash. Lazio and AS Roma lock horns in the maiden Derby della Capitale of the season, with Stadio Olimpico set to host another fiery contest.

Lazio have endured a disappointing start to the 2020/21 season, having managed to win just 8 of their opening 17 contests in Serie A till date. The Biancocelesti, though, are seemingly enjoying an upturn in form since the turn of the year, having backed the year-opening draw with Genoa with back-to-back wins against Fiorentina and Parma.

AS Roma, on the other hand, have been one of the form teams in the first half of the Serie A season, having lost just 3 of their first 17 fixtures so far. The Giallorossi have continued their progress under the tutelage of Paulo Fonseca, who has guided them to third on the table, with their most recent league fixture ending in an engrossing 2-2 draw with Inter Milan.

The corresponding fixture last season saw Lazio and AS Roma play out a 1-1 draw, with Luis Alberto and Aleksandar Kolarov on target for their respective teams. Ahead of the latest meeting between the two sides, The Hard Tackle takes a closer look at the encounter.

Simone Inzaghi has been handed a major boost on the team news front ahead of the game against AS Roma. As a result, on Friday, the Lazio manager will be bereft of the services of just three first-team players.

#Lazio coach Simone Inzaghi said a win against #ASRoma could be ‘fundamental in terms of motivation’ as the Aquile search for a third consecutive win in #SerieA. https://t.co/aCxeQ7WNDC#SerieATIM #LazioRoma #Giallorossi #Aquile #LaLupa #Biancocelesti pic.twitter.com/qyxh7ZQZmu

Captain Senad Lulic remains on the sidelines despite stepping up his recovery from injury, and is likely to miss this one. Thomas Strakosha (thigh) and Mohamed Fares (calf) are the other two absentees for Lazio. However, the aforementioned positive update is the return of Joaquin Correa, who will be in contention to feature after recovering from a calf injury.

Strakosha’s absence means Pepe Reina will continue to deputise in goal for Lazio, who will set up in their trademark 3-5-2 formation in front of the veteran Spaniard. This formation will transform into a 5-3-2 in the defensive phase, with the wing-backs dropping deep, as the central defenders sit in a compact form to kill off the space for AS Roma’s central striker.

Luiz Felipe, Stefan Radu and Francesco Acerbi should form the three-man central defensive unit, with Radu playing the sweeper role at the back. Meanwhile, the continued absence of Lulic should mean that Adam Marusic will continue in his makeshift role on the left flank, while Manuel Lazzari will feature as the right wing-back, who will maraud his flank quite regularly.

In midfield, Sergej Milinkovic-Savic will be the key man, who will look to engineer the openings when pushing Lazio forward, while Lucas Leiva will play the Anchor Man role and protect the backline. Luis Alberto will provide the X-Factor with his late runs in and around the box. Upfront, Correa could miss out, with Felipe Caicedo being Ciro Immobile’s strike partner. 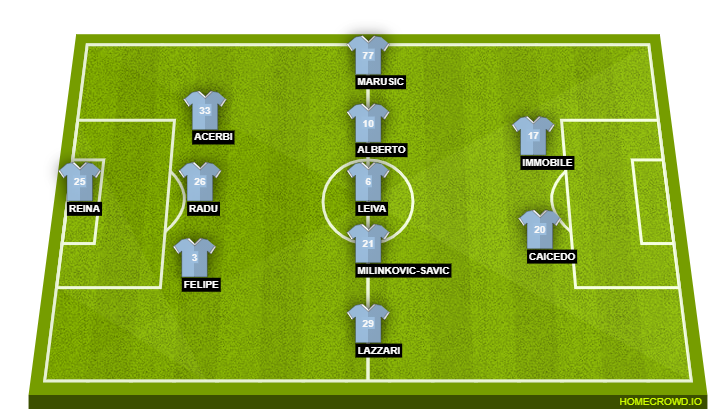 Paulo Fonseca does not have any fresh injury concern hampering his preparations ahead of the big game against Lazio. On Friday, the AS Roma manager will have to make do without as many as four first-team players.

While Nicolo Zaniolo is a long-term absentee due to his knee injury, the likes of Antonio Mirante (hamstring), Pedro (thigh) and Riccardo Calafiori (muscle injury) could all be available soon. AS Roma will line up in a 3-4-2-1 formation against Lazio, with Pau Lopez likely to be stationed in goal.

Gianluca Mancini, Chris Smalling and Roger Ibanez, who is reportedly on the radar of Arsenal and a number of other Premier League clubs, will form the back three, with the trio aiming to contain the threat of Lazio’s strike partnership. Smalling will be the leader at the back for Roma, looking to keep the defensive line organised while Ibanez and Mancini will be tasked with building up play.

Rick Karsdorp ought to get the nod over Bruno Peres in the right wing-back slot, with Leonardo Spinazzola starting on the left flank. The two wing-backs will hold the key in the final third as they will be solely in-charge of providing the width higher up the pitch, meaning their deliveries for Edin Dzeko will need to be absolutely pinpoint.

Jordan Veretout and Bryan Cristante will form the two-man central midfield partnership, with the duo sharing defensive responsibilities as well as having the task of providing the forward thrust from the middle of the park. The creative duties, though, will be left to Henrikh Mkhitaryan and Lorenzo Pellegrini, who will be the two advanced midfielders, playing off of Dzeko. 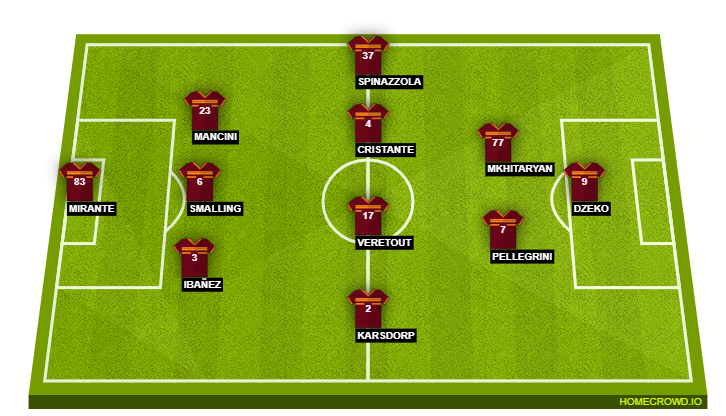 In a match laden with several potential game-changers, it is Edin Dzeko who once again garners a lot of spotlight. Despite arriving at the twilight of his career, the Bosnian remains quite a pivotal player for Roma and in what will be the battle of the strikers, it is his output that will hold the key in this fixture.

Backed by the in-form Henrikh Mkhitaryan, Dzeko has the kind of supply line to flourish, and the most experienced player in the Roman derby will be eager to leave his mark on the game at a time when he is reaching an age wherein he could start to be seen as a player in decline. Will Dzeko continue going strong in a fixture he so relishes?

This match will surely not be the same in the absence of the notorious fans, which is why despite being the away team on Friday, AS Roma have the advantage. With form on their side over the course of the Serie A campaign so far, the Giallorossi do have the edge going into this fixture.

The form of Henrikh Mkhitaryan, in particular, tips the scales in their favour to a great extent and Edin Dzeko is also expected to be at his best on Friday. Lazio, though, will make things difficult for their neighbours and a closely-contested affair should ensure. However, AS Roma should manage to eke out a 2-1 win, which should be a big result to prove their title credentials this term.