A place in the Supercopa de Espana final will be up for grabs when Real Sociedad take on Barcelona at Estadio Nuevo Arcangel on Wednesday.

The Spanish Super Cup winners will be crowned this week, with this being the second year in the new format for the competition. The first semi-final will be played between Real Sociedad and Barcelona, with the two teams meeting at Estadio Nuevo Arcangel in Cordoba on Wednesday night.

Real Sociedad have capitulated spectacularly following a strong start to the season when they had been going toe to toe with Atletico Madrid to be perched on the summit of La Liga. However, that is all in the past now, with La Real managing to win just one of their last 12 games in all competitions, with several of the winless results coming in the league, where they most recently lost to Sevilla.

Barcelona, on the other hand, are the form team in Spain at the moment, having not been beaten in any of their last eight games. This is their best run so far under the tutelage of Ronald Koeman, who is slowly but surely starting to get his ideas through to his squad. Their most recent result was a thumping 4-0 win over Granada, which was arguably their best performance of the season.

Barcelona and Real Sociedad have already locked horns once this season, with the Catalans coming from behind to win 2-1 last month. Ahead of the latest meeting between the two sides, The Hard Tackle takes a closer look at the encounter.

Imanol Alguacil has a number of pressing injury concerns hampering his preparations ahead of the Supercopa de Espana semi-final tie against Barcelona. On Wednesday, the Real Sociedad manager will be bereft of the services of as many as five first-team players.

The major absentee for La Real could be David Silva, who is struggling to shake off a muscle injury and misses out as a result. Apart from the veteran midfielder, the likes of Miguel Angel Moya, Aritz Elustondo, Luca Sangalli and Jon Pacheco are all unavailable as well. However, in some good news, Nacho Monreal has rejoined full training and should be back in the starting lineup.

The veteran Spaniard should be stationed in the left-back slot, with Andoni Gorosabel taking his place on the right flank. At the heart of the Real Sociedad defence, the impressive Robin Le Normand will have Igor Zubeldia as his partner while Alex Remiro will start in goal against Barcelona.

Up ahead in midfield, captain Asier Illarramendi will be in charge of setting the tempo and he will look to assert Real Sociedad’s dominance on the game. Mikel Merino and Ander Guevara will likely be his partners in the middle of the park, with the latter looking to keep a lid on the output of Pedri and Frenkie de Jong.

Finally in attack, Willian Jose will lead the line for Real Sociedad against Barcelona, with Alexander Isak missing out. Mikel Oyarzabal, though, will hold the key for La Real in the final third with his enterprising runs from the left flank, while Portu will be deployed on the right-wing. 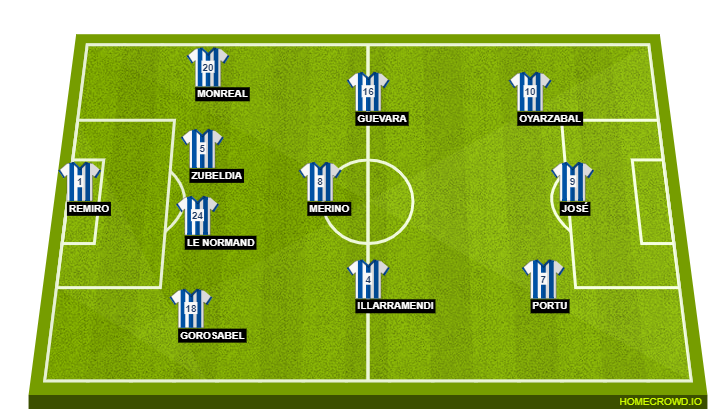 Ronald Koeman does not have any fresh injury concerns to contend with ahead of the Supercopa de Espana semi-final against Real Sociedad. On Wednesday, the Barcelona manager will continue to have to make do without four first-team players.

Gerard Pique, Sergi Roberto, Philippe Coutinho and Ansu Fati remain the only absentees for the Catalan giants. However, Barcelona seem to be faring just fine despite their absence and Koeman will hope his side can continue the momentum they have been building in recent weeks.

Marc-Andre ter Stegen is the obvious choice to be stationed between the sticks, with Barcelona set to be lined up in a 4-3-3 formation against Real Sociedad. Koeman has received some positive news as far as defence is concerned, with Clement Lenglet available for selection after serving out his suspension while Ronald Araujo is fit again after recovering from a hamstring injury.

With the duo included in the Barcelona squad for Supercopa de Espana, the central defensive partnership pretty much picks itself, with Oscar Mingueza missing out. As for the full-backs, Jordi Alba and Sergino Dest are automatic picks, with both players likely to be constant outlets down their respective flanks all through the game.

Up ahead in midfield, Sergio Busquets continues to be preferred ahead of Miralem Pjanic, despite his inconsistent performances. The veteran Spanish international should start at the base of the three-man midfield again, and will play the Anchor Man role for Barcelona. Frenkie de Jong and Pedri will provide defensive support.

The young creative midfielders, though, will take up advanced positions on the pitch during the offensive phases, taking a lot of the burden off of Lionel Messi. Speaking of the Barcelona captain, he will play the False Nine role, with Ousmane Dembele and Antoine Griezmann being the two wide men. Dembele will be direct in his approach while Griezmann’s nippy runs will hold the key as well.

The raw numbers might not reflect it, but Antoine Griezmann is slowly starting to carve out a place for himself at Barcelona. While he may be yet to hit double figures for goals this season, he has been chipping away at just about every opposition lately and is finally starting to back it up with returns as well.

If the performance against Granada is any indication, the goals could be flowing again for him. But, there are no two ways about the fact that it is now or never for Griezmann to start delivering on a consistent basis, with Barcelona gradually starting to look like contenders on all fronts. If they are to indeed win silverware, it is Griezmann’s output in addition to Lionel Messi’s that will hold the key.

Things have changed dramatically since the time these two sides last met, not too long ago. Real Sociedad are now struggling to win games while there has been very little stopping Barcelona lately, with the Blaugrana being their own worst enemy when they are indeed halted in their tracks.

Having said that, Imanol Alguacil has forged a resilient side that will give Barcelona a run for their money for large parts of the game on Wednesday. However, with Lionel Messi, Frenkie de Jong and Pedri being quite unstoppable and Antoine Griezmann steadily improving, the Catalans should be clear as the minutes tick by. To that end, The Hard Tackle predicts a 3-1 win for Barcelona to seal a place in the Supercopa de Espana final.