Manchester City will be eager to continue their fine winning run when they welcome Brighton & Hove Albion to the Etihad on Wednesday.

Gameweek 18 of the 2020/21 Premier League season is underway, in what is a compressed round of fixtures. One of the few matches on show will be played at the Etihad Stadium on Wednesday night when Manchester City play hosts to Brighton & Hove Albion.

Manchester City were slow off the blocks in the 2020/21 season, with Pep Guardiola’s men even spending some time in the bottom half of the table. Slowly but surely, though, the Cityzens’ quality is starting to shine through and they have been performing to their potential for some time now.

Heading into the midweek fixture, the hosts have now won six matches in a row, including the 3-0 success against Birmingham City in the FA Cup. Brighton, on the other hand, needed a shootout victory to progress in the cup competition this past weekend and have failed to win their last eight Premier League games, a run of results that has left them 17th on the table, just three points outside the drop zone.

The corresponding fixture last season saw Manchester City cruise to a 4-0 win over Brighton, with Kevin De Bruyne, Sergio Aguero (brace) and Bernardo Silva on target. Ahead of the latest meeting between the two sides, The Hard Tackle takes a closer look at the encounter.

Pep Guardiola has greeted a mixed bag of updates on the team news front ahead of the visit of Brighton & Hove Albion. On Wednesday, the Manchester City manager will likely be bereft of the services of as many as four first-team players.

The major absentee is Sergio Aguero, who is unavailable as he is self-isolating after coming in contact with someone who tested positive for the coronavirus. While Aguero has tested negative he has to comply with the regulations and hence misses out. Meanwhile, Eric Garcia remains on the sidelines while Aymeric Laporte and Nathan Ake are still out, though inching closer to their return.

However, in some good news, Ederson Moraes should be set to return to the starting lineup after completely recovering from COVID-19. In front of him, Guardiola should set Manchester City up in a 4-2-3-1 formation, which will essentially play as a 4-1-4-1 during the offensive phases of the game.

Kyle Walker came through unscathed following his first outing after recovering from the virus and should start in the right-back slot, with Joao Cancelo moving to the left. While Walker will often tuck in to support the holding midfielder, likely to be Rodri, Cancelo will look for more crossing opportunities down his flank.

At the heart of the Manchester City defence, there is no looking past John Stones and Ruben Dias, owing to the continued absence of Laporte, Ake and Garcia. Up ahead in midfield, as iterated earlier, Rodri will play the holding role, looking to be the disruptive influence for the Brighton attack while trying to set a quick tempo to the game.

Rodri will receive defensive support from Ilkay Gundogan, who will take up advanced positions and make late runs in and around the Brighton box to create overloads centrally. Kevin De Bruyne will pull the string higher up the pitch while Phil Foden and Raheem Sterling being the two wide men. In Aguero’s absence, Gabriel Jesus will lead the line for Manchester City. 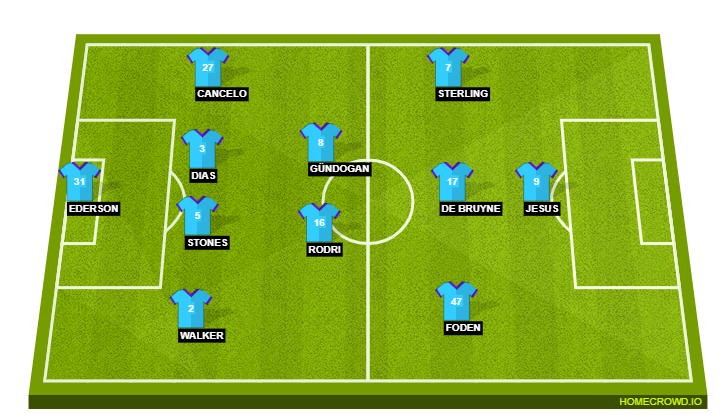 Like his counterpart in the Manchester City dugout, Graham Potter also has a fresh roster issue hampering his preparations ahead of the trip to the Etihad Stadium. On Wednesday, the Brighton & Hove Albion could have to make do without as many as eight first-team players.

Key players Tariq Lamptey, Danny Welbeck and Aaron Connolly are all out injured while Adam Lallana is unwell and Yves Bissouma is serving a suspension after accumulating five yellow cards. In addition, Alireza Jahanbakhsh will face a late fitness test to determine his availability, but Jose Izquierdo and Florin Andone miss out for Brighton against Manchester City.

Robert Sanchez, who has usurped Mat Ryan in goal this season, will take his place between the sticks for the visitors, who will likely be set up in a 3-4-2-1 formation against Manchester City. The three-man central defensive unit should comprise of Adam Webster, Dan Burn and captain Lewis Dunk, who will all look to remain compact in the defensive phase.

That is because the wing-backs will also fall back to create a back five when off the ball, meaning Joel Veltman and Solly March will become traditional full-backs in such a scenario. March, though, will also hold the key charging forward, as he links up with the front men. In midfield, meanwhile, Ben White and Davy Propper will aim to cut off the Manchester City attacks efficiently.

Finally, in attack, the continued absence of Welbeck and Connolly means that Neal Maupay will lead the line for Brighton against Manchester City, with Leandro Trossard and Alexis Mac Allister supporting him from centrally advanced positions. The duo will also be the furthest forward players at times, with the front three forming a fluid partnership. 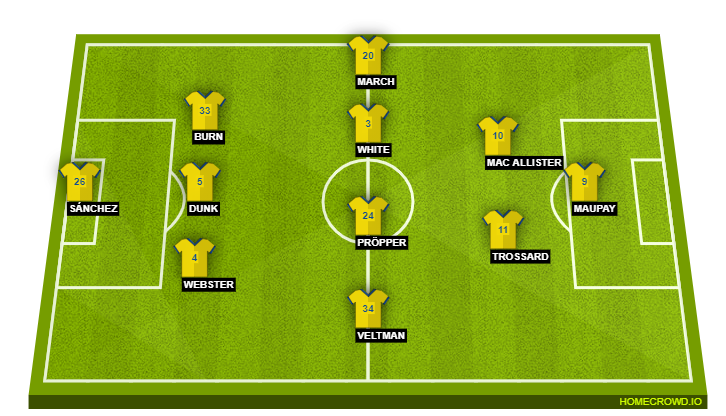 Time to step up. (Photo by Richard Heathcote/Getty Images)

In what has already been quite a bizarre season all around, Manchester City’s attack has been their weak link, much to the surprise of many. With Sergio Aguero out injured for the most part, City have sorely missed a focal point in the final third, something Gabriel Jesus is unable to provide as consistently as he would like.

However, with Aguero once again on the sidelines, this is Jesus’s opportunity to nail down a spot for himself in the starting lineup. His performance against Birmingham City, though, might not fill Pep Guardiola with too much confidence, although Jesus could put that down to rustiness after only recently returning from a spell on the sidelines himself. However, he cannot put a foot wrong against Brighton.

Manchester City are steadily improving in the final third with each passing game and the if their performance against Birmingham City is anything to go by, they are starting to find that swagger once again. That does not really bode well for a Brighton side that just cannot seem to win at the moment.

Furthermore, the Seagulls seem to be the whipping boys for Manchester City, who just love scoring against them and that should be the case on Wednesday as well. The visitors might pose a threat but are unlikely to breach the City defence. On the other end, there should be a few goals and The Hard Tackle predicts a 3-0 win for Pep Guardiola & co.