A place in the FA Cup fourth round will be on the line when Manchester City welcome Birmingham City to the Etihad on Sunday in their third round clash.

The FA Cup third round fixtures continue on Sunday, with as many as eight fixtures scheduled to be played on the day. Manchester City will be one of the big-name teams in action in one of the earlier match-ups, as they play hosts to Birmingham City at the Etihad Stadium.

Manchester City have recovered well from a wobbly start to the season and are slowly but surely starting to come into their own. Pep Guardiola’s men have won each of their last five fixtures in all competitions, with success against Chelsea and Manchester United in back-to-back games in the past week or so being a statement of intent from them.

Birmingham City, on the other hand, seem to be in all sorts of trouble, having gone six games on the trot without a single win (D1 L5). This run of results has sent Aitor Karanka & co. tumbling down the EFL Championship table, just four points outside the relegation zone. The Blues will now be eager to arrest their rut, but face a daunting task against Manchester City.

Manchester City were victorious the last time they locked horns with Birmingham City, grabbing a 2-0 win in the League Cup third round back in 2011. Ahead of the latest meeting between the two sides, The Hard Tackle takes a closer look at the encounter.

Pep Guardiola does not have any fresh roster issue hampering his preparations ahead of the visit of Birmingham City for the FA Cup third-round fixture. On Sunday, the Manchester City manager will likely be bereft of the services of as many as eight first-team players.

The likes of Ederson Moraes, Scott Carson, Eric Garcia, Tommy Doyle, Cole Palmer and Ferran Torres are all coronavirus-related absentees but should be available for selection soon. Apart from the aforementioned players, Aymeric Laporte and Nathan Ake should miss out once again due to minor injuries.

With his squad severely depleted, Guardiola will once again find it difficult to make rotations. However, a couple of youngsters could get a chance to make an impression, those being Taylor Harwood-Bellis and Felix Nmecha. Harwood-Bellis ought to pair up with John Stones at the heart of the Manchester City defence, with the duo playing a key role during build-up play for the hosts.

Out wide, Benjamin Mendy and Kyle Walker, who has now recovered from COVID-19 and is fit to start, should be the full-back pairing. The duo will look to whip in dangerous crosses from their flanks, with Walker also tucking in midfield at times. In goal, Zack Steffen is a certainty in the absence of Ederson, with the young goalkeeper being Manchester City’s preferred choice in cup games anyway.

Up ahead in midfield, Rodri ought to return to the starting lineup, with Fernandinho making way. The Spaniard will look to be disruptive in the middle of the park, while also pushing them forward and setting the tempo of the game. Rodri will likely have the in-form Ilkay Gundogan and Nmecha for company in the middle of the park, with the duo taking up advanced positions on the pitch.

As for the attack, Guardiola said in his pre-match press conference that Sergio Aguero will lead the line for Manchester City against Birmingham if he feels healthy. The Argentine should spearhead the attack, with Phil Foden and Riyad Mahrez, both of whom will overload the central areas, flanking him upfront. 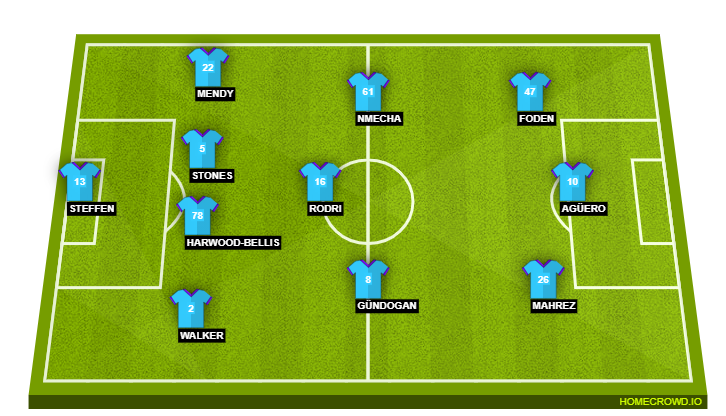 Unlike his counterpart in the Manchester City dugout, Aitor Karanka has actually been handed a double boost ahead of the trip to the Etihad Stadium for the FA Cup third-round tie. On Sunday, though, the Birmingham City boss will have to make do without four first-team players.

The likes of Alen Halilovic, Gray Gardner, Caolan Boyd-Munce and Zach Jeacock are all currently on the sidelines due to their ongoing recoveries from their respective injuries. However, Kristian Pedersen and Marc Roberts have returned to training and are in contention to take on Manchester City on Sunday.

Andres Prieto ought to come into a much-changed starting lineup, with Birmingham expected to be set up in a 4-3-3 formation against Manchester City. Jake Clarke-Salter and George Friend are likely to keep hold of their spots, with Maxime Colin and Harley Dean set to be handed a start on Sunday. The quartet will look to remain compact off the ball and absorb the pressure of the Manchester City attack.

Maikel Kieftenbeld will have the responsibility of keeping things disciplined in the middle of the park, with Adam Clayton and Jon Toral lining up alongside him in a defensive-minded setup. Finally, in attack, Scott Hogan will lead the line for Birmingham City against Manchester City, with Jeremie Bela and Jonathan Leko being the two wide men. 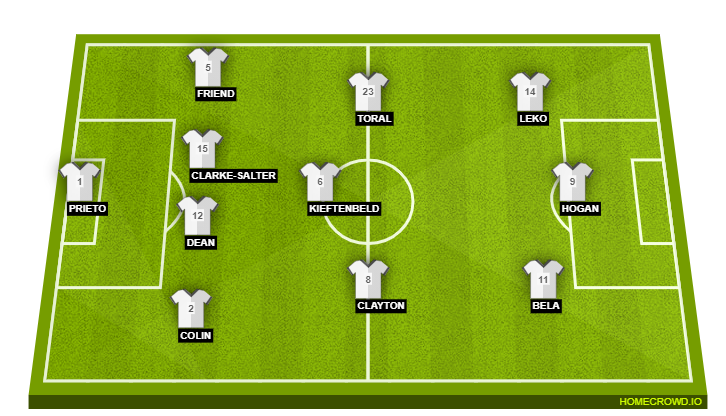 Sergio Aguero is set to return to the starting lineup. (Photo by Clive Mason/Getty Images)

It has been quite a frustrating season for Aguero, who has spent the majority of the campaign on the sidelines. However, having now regained fitness and set to start a game for the first time since October, this is the Argentine striker’s chance to nail down a spot in the side for the long haul.

More importantly, though, Aguero’s return bodes well for Manchester City, who have sorely lacked that focal point in attack over the past couple of months. With Gabriel Jesus blowing hot and cold, Aguero’s return could not be better timed, as Manchester City look to go on a run and mount a challenge for the much-sought quadruple. It all starts with the game against Birmingham City.

This one should be rather straightforward. Manchester City are on a roll, while Birmingham City just cannot seem to grab a win. While the hosts should make a couple of changes, they should still be too strong for a team that seems to be in a rut. With that being said, Pep Guardiola & co. should cruise to a 3-0 win, with Sergio Aguero leading the way for them.