Real Madrid will be aiming to continue their unbeaten run and keep pace with La Liga leaders Atletico Madrid when they face Osasuna at El Sadar on Saturday.

The games continue to come thick and fast all across Europe and in Spain, Matchday 18 of the 2020/21 La Liga season begins this week. The action on Saturday will be concluded at El Sadar, where Osasuna will play hosts to defending champions Real Madrid.

Osasuna have endured a difficult 2020/21 La Liga campaign thus far, having managed to win just 3 of their 16 games till date. With half of their matches ending in defeat, Los Rojillos are languishing in 19th place on the table. However, seeing as they are just two points from safety with a game in hand, Jagoba Arrasate’s men are hardly in a dreadful state and have their safety in their own hands.

Real Madrid, on the other hand, have recovered well from an indifferent start to the season, with their recent form in La Liga being quite promising. The Merengues are currently on a seven-game unbeaten run in the top-flight, grabbing the maximum quota of three points in six of those fixtures. This run of results has helped them climb up to second in the standings, just two points behind leaders Atletico Madrid.

The corresponding fixture last season saw Real Madrid come from a goal down to beat Osasuna 4-1, courtesy goals by Isco, Sergio Ramos, Lucas Vazquez and Luka Jovic. Ahead of the latest meeting between the two sides, The Hard Tackle takes a closer look at the encounter.

Jagoba Arrasate does not have any fresh injury concern hampering his preparations ahead of the visit of Real Madrid. On Saturday, the Osasuna manager will be bereft of the services of as many as five first-team players, who have missed out of the matchday squad.

Ruben Martinez (hand), Lucas Torro (hamstring), Darko Brasanac (knock), Chimy Avila (knee) and Adrian (knock) are all on the sidelines and ruled out of the contest against Real Madrid. Otherwise, Arrasate has all of his players available to him and should name a strong lineup.

The Osasuna manager has largely favoured the 4-4-2 formation this season and should make use of the same versus Real Madrid, aiming to use the presence of two strikers to disrupt the visitors’ central defensive pairing. Another key feature about the setup will be the presence of two holding midfielders, who will primarily sit behind the ball and absorb the pressure of Los Blancos‘ attack.

Jonathan Calleri and Ante Budimir should form the strike partnership while Jon Moncayola and captain Oier will be the two central midfielders essaying the aforementioned role. Ruben Garcia and Roberto Torres ought to be the two wide midfielders who will provide defensive support to the holding midfielders while also charging forward intently when given a chance.

At the back, David Garcia should pair up with Aridane Hernandez at the heart of the Osasuna defence, with Facundo Roncaglia and Juan Cruz being the full-back partnership for the hosts. Finally, Sergio Herrera picks himself between the sticks. 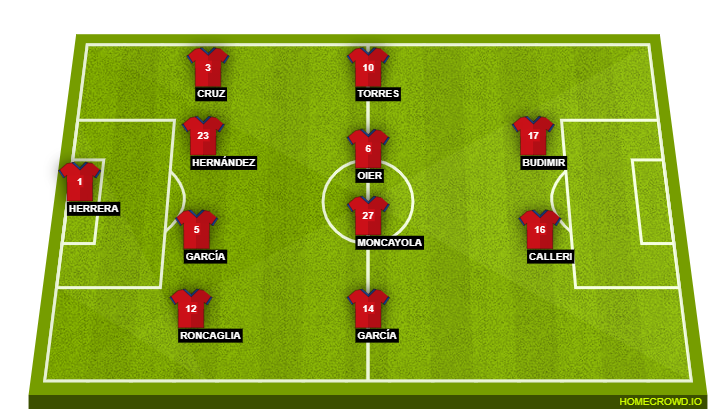 Zinedine Zidane has greeted a mixed bag of updates on the team news front ahead of the trip to El Sadar. Against Osasuna on Saturday, the Real Madrid manager will have to make do without just two first-team players and has welcomed one member of his squad back in the fold.

Dani Carvajal misses out for the visitors due to a suspension, accrued due to an accumulation of yellow cards. The Spaniard has joined Rodygo Goes on the sidelines, with the Brazilian a long-term absentee due to a hamstring injury. However, captain Sergio Ramos is available after missing the previous game.

Meanwhile, there had been concerns over Zidane’s own availability after coming in contact with a person who contracted COVID-19, but the Real Madrid boss will be on the touchline on Saturday against Osasuna.

There are unlikely to be many alterations apart from the forced changes, with Sergio Ramos likely to come in for Carvajal, while Nacho moves out to the right-back slot. Ramos and Varane will pair up at the heart of the Real Madrid defence, with Los Blancos’ captain being given the license to roam forward at will.

The duo will also be key during the build-up play. Ferland Mendy will be the other full-back, with neither wide defender posing a great deal of threat down their respective flanks. Nacho, though, might look to open up play with long balls. In goal, Thibaut Courtois is a certainty.

Up ahead in midfield, near week-long rest means that Luka Modric, Casemiro and Toni Kroos will likely continue their formidable partnership. Casemiro will be the disruptive element in the middle of the park, although he will also make late runs into the box when given the chance. Modric will be the ball carrier while Kroos will aim to pull the strings.

Finally, the attacking trifecta from the previous game ought to remain unchanged following the stellar displays by both Lucas Vazquez and Marco Asensio. Karim Benzema will lead the line as always for Real Madrid against Osasuna.

Will the real Eden Hazard show up against Osasuna? (Photo by David Ramos/Getty Images)

The frustrations are showing no signs of stopping for Eden Hazard at Real Madrid, with injuries being a never-ending source of exasperation. The Belgian wing wizard has recently returned from yet another lay-off and is having his minutes managed in order to ensure he does not break down again.

With that in mind, Hazard is unlikely to be risked by being a part of the starting lineup against Osasuna but should get a large chunk of minutes in the second half. It is in this period wherein it will be interesting to see how he goes about things.

If he can manage to build his sharpness efficiently, he will be setting himself up for an important role ahead of the resumption of the UEFA Champions League. If not, the frustrations will continue yet again for Hazard, who will be determined to get back to his very best soon. A big game for the Belgium captain.

When it comes to Real Madrid in the 2020/21 season, nothing seems to be straightforward, despite their recent run. However, this is as elementary a result as they come, considering Los Blancos’ superb away form, coupled with Osasuna’s own poor run at home. To that end, The Hard Tackle predict a 2-0 win for Zinedine Zidane’s men, with Eden Hazard making an impact off the bench.