A place in the fourth round of the FA Cup will be on the line when Aston Villa welcome Liverpool to Villa Park in their third-round tie on Friday.

The FA Cup campaign for the season continues this week with the third round, as every team from the Premier League gets set to enter the competition for the first time. One of the bigger games of the latest stage is slated to be played at Villa Park on Friday night when Aston Villa welcome Liverpool.

Aston Villa have been in resurgent mood in 2020/21 after narrowly escaping from the clutches of relegation last term. The Villans are likely to avoid a relegation dogfight this time out, having already amassed 26 points following their opening 15 games in the Premier League. Dean Smith & co. though, come into this game on the back of a 2-1 loss at the hands of Manchester United.

Liverpool, too, were defeated in their most recent fixture, with Southampton grabbing a shock 1-0 win at their expense earlier this week at St. Mary’s. However, the Merseyside outfit are once again in the thick of the Premier League title race and are currently perched atop the table, although the Red Devils could usurp them if they win their game in hand.

Aston Villa and Liverpool have already faced each other once this season, that too at Villa Park, with the Villans handing a humbling 7-2 defeat to Jurgen Klopp’s men earlier in the season. Ahead of the latest meeting between the two sides, The Hard Tackle takes a closer look at the FA Cup encounter.

The @FA and @AVFCOfficial are working closely together to try to ensure that the club’s #EmiratesFACup third round tie with @LFC can go ahead as planned at Villa Park tomorrow evening.

Final confirmation will be made tomorrow pending the results of additional COVID-19 testing. https://t.co/HmBDvxpQpo

Before we get onto the team news and possible selection from Dean Smith, it is important to inform that Aston Villa have made an official statement to iterate that their training ground had been shut on Thursday following a “significant” coronavirus outbreak within the first-team squad.

It has been suggested that several Aston Villa players returned positive results following a second round of testing. So, while the match against Liverpool is in doubt to be played as scheduled, we will name a possible starting lineup without indulging in much speculation, with the game still on at the time of writing, especially with the names of the positive cases not revealed as of yet.

In goal, Tom Heaton should make a rare appearance in place of Emiliano Martinez, with Dean Smith setting his team up in the 4-2-3-1 formation he has preferred in recent weeks. This will entail Aston Villa to keep things compact throughout the spine of the side, albeit with the defending starting right from the central striker.

The two full-backs will provide the width higher up the pitch, with Frederic Guilbert and Neil Taylor both getting a chance to impress in the FA Cup tie. At the heart of the Aston Villa defence, Tyrone Mings and Kortney Hause will pair up, with Ezri Konsa missing out.

Up ahead in midfield, Conor Hourihane and Marvelous Nakamba will also be handed rare starts, with the duo tasked with keeping things tight in the middle of the park and shutting out Liverpool through the middle.

The job of providing the forward thrust will fall on the young shoulders of Jacob Ramsey, who will reprise the no. 10 role to provide Jack Grealish with some much-needed rest. Ross Barkley ought to return, though, starting on the right flank, with Anwar El Ghazi stationed on the left-wing. Finally, Ollie Watkins will lead the line for Aston Villa against Liverpool. 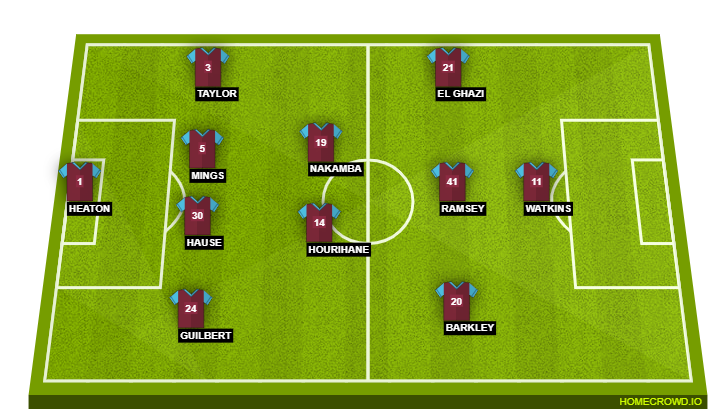 Jurgen Klopp does not have any fresh injury concerns hampering his preparations ahead of the trip to Villa Park. Against Aston Villa on Friday, the Liverpool manager will continue to be bereft of the services of as many as six first-team players.

Joel Matip and Naby Keita have both stepped up their respective recoveries and will soon be in contention to feature for Liverpool. The Aston Villa game, though, has come too soon for the duo. The likes of Kostas Tsimikas, Virgil van Dijk, Joe Gomez and Diogo Jota remain unavailable and will not be at Klopp’s disposal anytime soon.

As is the case in cup competitions, the Liverpool boss should rotate his side heavily to hand fringe players an opportunity to impress. Meanwhile, someone like Thiago Alcantara, who is looking to improve his sharpness with more game-time, will also receive a start against Aston Villa.

Klopp should set his team up in a 4-2-3-1 formation, though, in order to bring the best out of the players who will likely be named in the starting lineup on Friday. In particular, the setup will see Takumi Minamino be able to play through the middle, given the license to roam freely and get into pockets of spaces in order to carve the openings.

Thiago, meanwhile, will look to dictate play by reprising the role of a deep-lying playmaker, with Curtis Jones, expected to be his partner in the double pivot, being the box-to-box midfielder who will use his energy to good effect both on and off the ball.

Xherdan Shaqiri and Alex Oxlade-Chamberlain will be the two wide men who will drive forward at pace when afforded the chance, while Divock Origi ought to spearhead the Liverpool attack versus Aston Villa. At the back, a new-look defensive line will feature Neco Williams, Rhys Williams, Nat Phillips and James Milner, while the impressive Caoimhin Kelleher will be stationed in goal.

Back on the stage where he first shined. (Photo by Richard Heathcote/Getty Images)

Jurgen Klopp’s outlook of primarily naming youngsters and fringe players in his starting lineups in cup competitions is a double-edged sword, of sorts. While this decision often ends up in an ouster for Liverpool, mostly early in the tournament, it has also yielded them one of their most promising youngsters.

Curtis Jones was a standout for Liverpool in both the Carabao Cup and the FA Cup last season and it is in these competitions where he first made a name for himself, impressing Klopp so much that he fast-tracked him to a regular role in the Premier League. Having now established a foothold in the Reds’ midfield unit, Jones is once again braced for a start in the FA Cup, this time with a different aim.

With Thiago Alcantara now fit again and raring to go, chances could soon be coming at a premium for Jones, unless he manages to impress in the opportunities he does get. With the 29-year-old still building up his sharpness and not quite at his best last time out, Jones will also have a lot more responsibility on his young shoulders as far as the immediate future is concerned, versus Villa. A big game either way for the youngster.

Before news of the coronavirus outbreak within the Aston Villa first-team broke, the tie appeared to be quite even, considering Liverpool’s wobbly form on the road this term. However, it is highly likely that the hosts will be considerably weakened if the game does go ahead (the team starting on Friday might be starkly different to the one we have predicted).

With that in mind, Liverpool should have a major advantage when taking to the field at Villa Park, despite the fact that Jurgen Klopp will name a largely second-string side on Friday. Curtis Jones will likely be the standout performer, in that case, guiding the Reds to the next round and quite comfortably so, though Aston Villa should still make a fist of it. We predict a 3-1 win for Liverpool.