Barcelona will be eager to continue their charge up the table in La Liga when they take on Athletic Bilbao at San Mames on Wednesday.

The games continue to come thick and fast all across Europe, with teams in Spain back in action uncharacteristically this early in a year as well. Barcelona will play their game in hand this midweek on Wednesday night, when Athletic Bilbao play hosts to them at San Mames, with both teams in need of a win.

Athletic Bilbao currently sit 9th in the standings, but still find themselves in a precarious position in the grander scheme of things in La Liga. The Basque outfit have dropped points in 11 of their 17 games so far, which means that they are just five points clear of the drop zone despite their lofty position. It is this looming threat that cost Gaizka Garitano his job, with Marcelino taking charge in his stead.

Barcelona, like Bilbao, have been plagued by inconsistencies as well this season, having managed to win just half of the 16 games they have played thus far in La Liga. In fact, the Blaugrana have won back-to-back games just twice till date this term, never once winning thrice on the trot. However, Ronald Koeman & co. are currently on a six-game unbeaten run, which ought to create some sort of momentum for them.

The corresponding fixture last season saw Athletic Bilbao eke out a narrow 1-0 win over Barcelona, courtesy a stunning acrobatic finish by Aritz Aduriz in the final minute of regulation time. Ahead of the latest meeting between the two sides, The Hard Tackle takes a closer look at the encounter.

Marcelino will take charge of Athletic Bilbao for the very first time on Wednesday against Barcelona. (Photo by Pau Barrena/AFP/Getty Images)

Marcelino does not have any fresh injury concerns hampering his preparations ahead of his first game in charge of Athletic Bilbao. Against Barcelona on Wednesday, the hosts will be without as many as three first-team players.

Yeray Alvarez (knock), Peru Nolaskoain (ankle) and Unai Lopez (knee) all continue to serve time on the sidelines and will miss out. As far as team selection is concerned, Marcelino has not had much time to work with the squad at his disposal, but he should utilise his favoured 4-4-2 formation versus Barcelona.

The onus will be on the full-backs to provide width in the final third, with the two wide midfielders veering infield to create overloads in the central areas. Ander Capa and Yuri Berchiche should be the full-back pairing for Bilbao, with Unai Nunez and Inigo Martinez forming the central defensive partnership, while Unai Simon is the first-choice goalkeeper for the hosts.

Up ahead in midfield, Mikel Vesga and Dani Garcia ought to be stationed centrally, with the duo being tasked with keeping things tight in the middle of the park, keeping a check on the output of Pedri, in particular. Garcia, though, will also look to transition from defence to attack, providing the forward thrust from midfield.

As for the wide midfielders, Alex Berenguer and captain Iker Muniain should get the nod over the others, with Muniain, in particular, aiming to engineer openings for the strikers ahead of him. Inaki Williams, who is usually deployed on the right-wing, moves into the central position, playing off of Asier Villalibre, who will run off the shoulders of the Barcelona defenders. 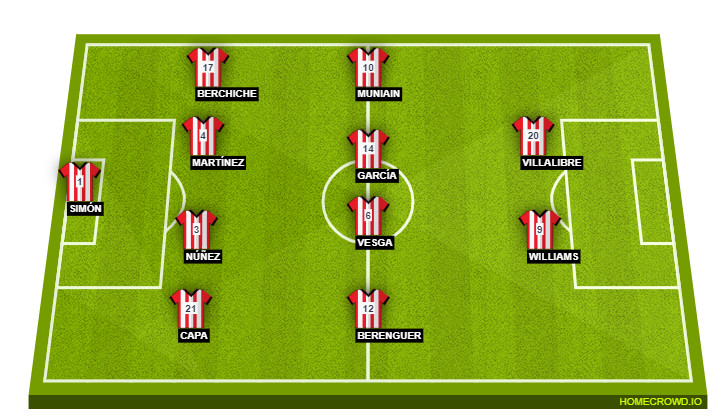 Like his counterpart in the Athletic Bilbao dugout, Ronald Koeman is not being bogged down by any new roster issue. On Wednesday, the Barcelona manager will be bereft of the services of as many as five first-team players.

Ansu Fati, Gerard Pique and Philippe Coutinho are all long-term absentees due to their respective knee injuries. Apart from the trio, Sergi Roberto (thigh) and Samuel Umtiti, whose future at Camp Nou is uncertain are also unavailable but should be back in contention in a few weeks’ time.

Roberto’s continued absence means Sergino Dest will continue in the right-back slot, with Jordi Alba a certainty on the opposite flank. The two full-backs will be tasked with creating the chances from the wide areas, although Dest needs to address his end product. At the heart of the Barcelona defence, Ronald Araujo and Clement Lenglet should pair up again.

Marc-Andre ter Stegen picks himself between the sticks, with Barcelona setting up in a 4-3-3 formation once again, with their last experiment with the 3-4-2-1 system not really bearing fruits. In the middle of the park, Miralem Pjanic should come in for Sergio Busquets, whose lack of mobility has been exposed this season.

Pjanic, though, should offer better protection to the backline, while also looking to pull the strings from the deeper position and aiming to set a quick tempo to the game. Frenkie de Jong and Pedri will likely be the other two midfielders, with the duo providing the creative impetus for Barcelona.

Pedri has been one of the most creative players in the entirety of La Liga this season and the teenage prodigy will once again look to fashion the openings higher up the pitch. Pedri’s presence also takes some of the pressure off Lionel Messi, who will instead aim to get into scoring positions, with Ousmane Dembele and Antoine Griezmann providing the supporting act in attack.

Time to go on a tear. (Photo by Aitor Alcalde/Getty Images)

In what has been another injury-riddled season, Dembele has been able to fight for and win his place in the side by showing a lot of character and fighting spirit. Talks of a poor attitude are nowhere to be seen now while speculation over his future has also disappeared. It now seems like the Frenchman might finally fulfil his prophecy at Barcelona.

The 2020/21 season has been one wherein Barcelona continue to flatter to deceive in key moments, which is a tad bit underwhelming. However, if there is one player who has the X-Factor to make the difference, it is Dembele, who never shies away from taking on the defender, although to varying degrees of success. And against an Athletic Bilbao side that might put men behind the ball, it is this outlook that will come in handy.

Barcelona just cannot seem to be able to get on top of their opponents, despite boasting the joint-best attacking record in La Liga this season. With Athletic Bilbao set for a new era under Marcelino, the tie should be closely contested, especially seeing as Barcelona have not been happy visitors at San Mames.

We might even see the new manager bounce come into effect, with the players looking to prove their credentials and nail down their places in the side. Having said that, Bilbao have seemed to be quite prone to lapses in concentration at the back and with Ousmane Dembele in full flow lately, the visitors should have the slightest of edges, which is why we predict a 1-0 win for Barcelona.