Serie A champions Juventus will be eager to bounce back to winning ways when they welcome Udinese to the Allianz Stadium on Sunday.

The winter break is quickly over and Serie A action resumes this weekend with Matchday 15 of the 2020/21 season getting underway. Each of the 10 games will be played on Sunday and defending champions Juventus will return to action in the last game of the latest round of fixtures, as they play hosts to Udinese at the Allianz Stadium.

Juventus have endured a difficult start to life under Andrea Pirlo, having struggled to stitch together an elongated winning run. The Bianconeri have grabbed all three points in just six of their 13 Serie A games till date this term and come into this match on the back of their first league defeat of the season, with Fiorentina grabbing a shock 3-0 win at the Allianz Stadium.

Udinese, on the other hand, did not have a December to remember, as their fine four-game unbeaten run came to crashing halt in their final three outings of 2020. Le Zebrette were first held to disappointing draws by teams below them in Cagliari and Crotone before Benevento handed them a 2-0 defeat at home to bring the curtains down on the year in underwhelming fashion.

The corresponding fixture last season saw Juventus cruise to a 3-1 win over Udinese, courtesy goals from Cristiano Ronaldo (2) and Leonardo Bonucci, with Ignacio Pussetto scoring a late consolation strike for the visitors. Ahead of the latest meeting between the two sides, The Hard Tackle takes a closer look at the encounter.

Andrea Pirlo has greeted a mixed bag of updates on the team news front ahead of the visit of Udinese. On Sunday, the Juventus manager will be bereft of the services of just one first-team player, with Juan Cuadrado unavailable.

The Colombian international is suspended for the tie versus Udinese after being sent off early on against Fiorentina. However, in some good news, defensive duo Merih Demiral and Giorgio Chiellini will be in contention to feature after fully recovering from their respective thigh injuries.

Demiral and Chiellini, though, will likely have to make do with places on the bench, with Matthijs de Ligt and Leonardo Bonucci expected to pair up at the heart of the Juventus defence. Meanwhile, in Cuadrado’s absence, Danilo is a certainty in the right-back slot, with Alex Sandro starting on the opposite flank. In goal, there is no looking past Wojciech Szczesny.

Up ahead in midfield, Rodrigo Bentancur is a certainty, having become the first-choice holding midfielder under Pirlo. Federico Chiesa is one of the go-to men for the Juventus boss as well and should start in the left-midfield role. However, Weston McKennie and Aaron Ramsey should drop out after underwhelming displays in the previous game.

In their stead, Federico Bernardeschi and Adrien Rabiot ought to come in, with the former set for a rare start on the right-wing. Finally, the strike partnership comprising of Alvaro Morata and Cristiano Ronaldo ought to continue, meaning Paulo Dybala, who has recently been linked with Manchester United, misses out again. 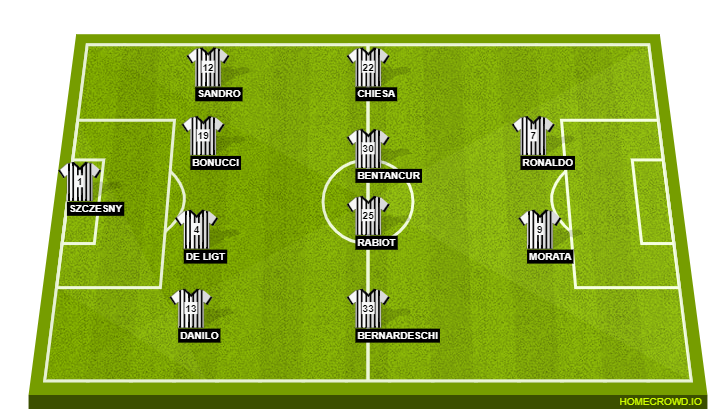 Unlike his counterpart in the Juventus dugout, Luca Gotti has a multitude of issues to contend with ahead of the trip to the Allianz Stadium. On Sunday, the Udinese manager will have to make do without as many as six first-team players.

Rodrigo Becao is suspended after receiving his fifth yellow card of the season last time out against Benevento. In addition to the 24-year-old centre-back, Udinese are also travelling to face Juventus without the likes of Bram Nuytinck (calf), Thomas Ouwejan (match fitness), Sebastian Prodl (knock), Mato Jajalo (knee) and Stefano Okaka (thigh).

Gerard Deulofeu, though, is fit and will be in contention to take the field as part of the strike partnership. However, the 26-year-old is only likely to make an appearance off the bench, with Kevin Lasagna and Ignacio Pussetto pairing up in the final third.

On the other end of the pitch, Juan Musso picks himself between the sticks, with Udinese setting up in a 3-5-2 formation against Juventus. In the absence of Becao, Sebastien De Maio ought to line up alongside Kevin Bonifazi and Samir in the three-man central defensive unit.

As for the midfield, the key man for Udinese will be Walace, who will be tasked with keeping things tight in the middle of the park while attempting to nip the Juventus moves in the bud. Jens Stryger Larsen and Marvin Zeegelaar will be the two wing-backs who will provide the width in the final third, with Rodrigo De Paul and former Juventus man Roberto Pereyra providing the creative push. 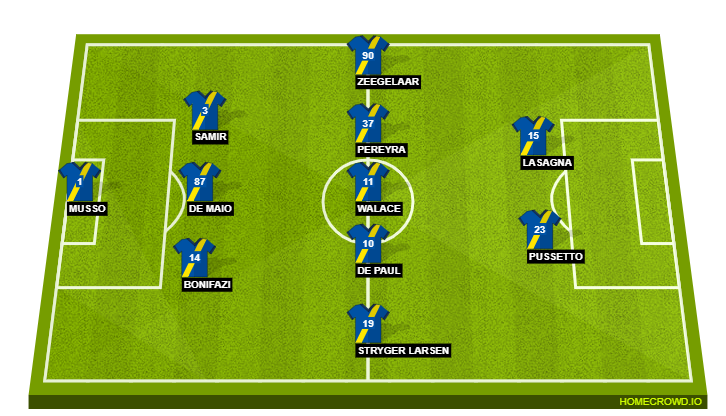 Will Ronaldo deliver the goods? (Photo by Alessandro Sabattini/Getty Images)

Juventus might not be fluent enough more than a quarter of a year into the Andrea Pirlo era. But, one man has been pulling the weight as much as he possibly can so far in the 2020/21 season. Ahead of Matchday 15 of the 2020/21 Serie A season, Cristiano Ronaldo leads the scoring charts in the league, with 12 goals to his name.

That accounts for nearly half of the goals that the entire Juventus team has managed after their first 13 outings in the top-flight this term. With the Bianconeri plagued by inconsistencies, it goes without saying that Ronaldo and his output will hold the key when they host Udinese on Sunday. Yet another game wherein Ronaldo needs to do a lot of the heavy lifting in the final third.

Things have just not been easy for Andrea Pirlo in his maiden campaign as a manager. The Italian is still not privy to his best setup just yet and has been quite heavily dependent on Cristiano Ronaldo, who himself has not been in full flow. The absence of Juan Cuadrado, who has arguably been the Bianconeri‘s best player this term, could hurt them as well.

Having said that, Danilo should bolster the defensive side of things and Juventus ought to be solid enough to keep Udinese at bay all through the night. On the opposite end, though, they could struggle again, but Ronaldo should pull them through eventually. With that in mind, The Hard Tackle predicts a 1-0 win for Pirlo’s men to return to winning ways against Udinese.