Borussia Dortmund will hope to bounce back to winning ways in the Bundesliga and return to the top four when they take on VfL Wolfsburg on Sunday.

The Bundesliga is back after a short holiday period, with Matchday 14 of the 2020/21 season kicking off on Saturday. Sunday has just two matches on show, with Borussia Dortmund in action first up, as they play hosts to VfL Wolfsburg at the Signal Iduna Park, eager to return to winning ways in the league.

For Borussia Dortmund, 2020/21 has been quite a roller-coaster of a campaign already. The Black and Yellows have been defeated as many as five times after the first 13 round of fixtures, a run of results that has left them 5th on the table and Lucien Favre without a job. In fact, the hosts lost their most recent Bundesliga encounter as well, going down 2-1 to Union Berlin.

VfL Wolfsburg, on the other hand, have been beaten just once in the Bundesliga so far this term but have largely been pegged back by half-a-dozen draws. However, the fact that they have the third-best defensive record in the top-flight, coupled with six wins, means that Die Wolfe are currently 4th in the standings, only six points off the top.

The corresponding fixture last season saw Borussia Dortmund run out 3-0 victors over Wolfsburg courtesy second-half goals by Thorgan Hazard, Raphael Guerreiro and Mario Gotze. Ahead of the latest meeting between the two sides, The Hard Tackle takes a closer look at the encounter.

Thorgan Hazard misses out with a muscle injury. (Photo by Joe Robbins/Getty Images)

Edin Terzic has been handed a major boost on the team news front ahead of the visit of Wolfsburg. On Sunday, the interim Borussia Dortmund manager will be bereft of the services of three first-team players, but is set to welcome back a key player into the fold, with Erling Haaland fit and available after having missed Dortmund’s last seven competitive fixtures in 2020.

The 2020 Golden Boy has taken part in full training and should be reinstated in the lineup against Wolfsburg. Dortmund, though, are missing Youssoufa Moukoko and Marcel Schmelzer due to their respective knee injuries, while Thorgan Hazard is unavailable due to a muscle injury.

In his absence, Giovanni Reyna should be stationed on the left-wing, while Jadon Sancho ought to start on the opposite flank. Haaland will lead the line for Dortmund versus Wolfsburg with Marco Reus playing off of him, reprising the no. 10 role.

Emre Can ought to be recalled after being given a breather last time out in DFB-Pokal against Eintracht Braunschweig. Axel Witsel should return as well, with Julian Brandt, who has reportedly appeared on the radar of Arsenal, making way for the Belgian international.

In defence, the likes of Thomas Meunier, Manuel Akanji, Mats Hummels and Raphael Guerreiro pick themselves. Akanji and Hummels will hope to keep things tight at the heart of the Dortmund defence while Meunier and Guerreiro will post a threat going down their respective flanks. Finally, Roman Burki is an automatic pick in goal for the hosts. 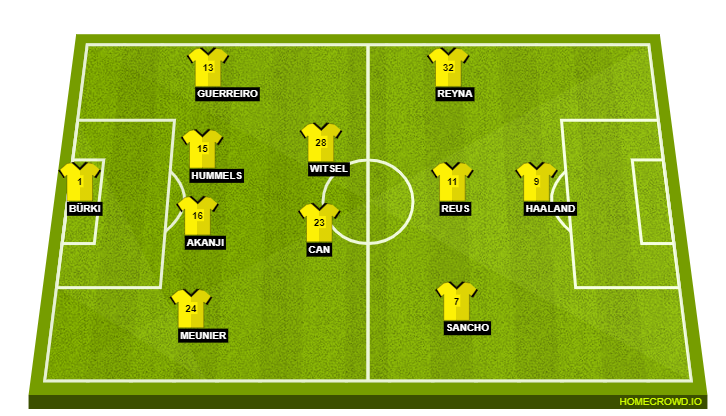 Unlike his counterpart in the Borussia Dortmund dugout, Oliver Glasner has quite a few roster issues to contend with ahead of the trip to the Signal Iduna Park. On Sunday, the VfL Wolfsburg boss could have to make do without as many as six first-team players.

Question marks remain over the heads of Kevin Mbabu, Jerome Roussillon, Maxence Lacroix and Maximilian Arnold, each of whom could be unavailable to take on Dortmund. In addition, Admir Mehmedi and Pavao Pervan are certain to miss out. However, John Brooks is available again and should be back in the starting lineup straightaway.

Koen Casteels is the obvious pick between the sticks for the visitors, who will be set up in a 4-2-3-1 formation against Dortmund. Brooks, as iterated earlier, should start at the heart of the Wolfsburg defence, with Marin Pongracic being his partner. Ridle Baku and Paulo Otavio ought to be the full-backs in the absence of Mbabu and Roussillon.

Up ahead in midfield, the onus will be on Josuha Guilavogui to keep things tight and keep a check on the output of Marco Reus and Jadon Sancho. The Wolfsburg captain will likely have Xaver Schlager for company in the middle of the park, with 23-year-old looking to provide the forward thrust from midfield.

Former Dortmund man Maximilian Philipp ought to start on the left-wing, with Renato Steffen an automatic pick on the right flank. Wout Weghorst will be the key man for Wolfsburg, spearheading the attack and looking to break his duck against Dortmund, with Josip Brekalo likely to play off of him. 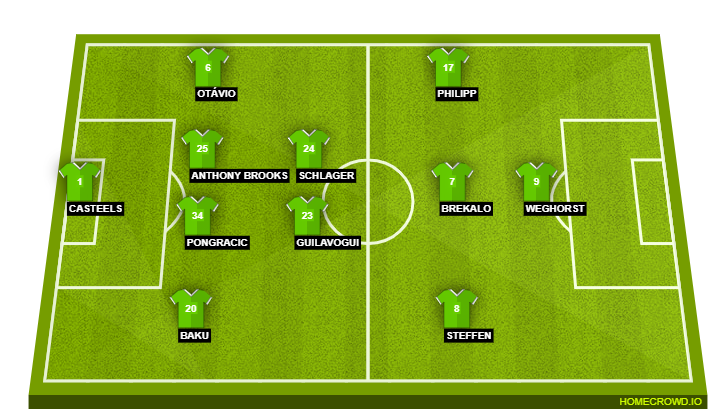 Are we set for an Erling Haaland special on Sunday? (Photo by Lars Baron/Bongarts/Getty Images)

In a season that has been plagued by inconsistencies, Haaland has been a rare shining light for Borussia Dortmund. The 20-year-old, who was recently crowned as the 2020 Golden Boy, has 17 goals and 3 assists in just 14 games this season, as he continues to find the back of the net for fun.

It goes without saying that the absence of his influence during his layoff due to a hamstring injury was quite telling. Now that he is fully fit and raring to go, it is undeniable that Haaland will hold the key for Dortmund, as they look to begin 2021 on a positive note and mount what looks like an unlikely Bundesliga title challenge at the moment. It all starts with the game against Wolfsburg.

Borussia Dortmund returned to winning ways last time out against Eintracht Braunschweig in the DFB-Pokal, but have lost each of their last three home games in the Bundesliga. Another defeat would see them equal an unwanted club record, set way back in 2000, and their job does not get any easier, with a tricky test in VfL Wolfsburg awaiting them up next.

However, the return of Erling Haaland means they should be able to avoid another embarrassing result at Westfalenstadion. With that being said, their vulnerable backline means that Dortmund will constantly be put to the sword by a stubborn Wolfsburg side, who have what it takes to take all three points at the Signal Iduna Park.

Wolfsburg, though, have won only one of six on the road (D4 L1). With that being said, the likeliest result seems to be a stalemate, the seventh time Wolfsburg will play out a draw in the Bundesliga this season. In what is hardly an ideal result for Dortmund, The Hard Tackle predicts a 1-1 draw on Sunday.