Arsenal will hope to win a third successive Premier League game for the first time this term when they face West Bromwich Albion on Saturday.

A new year begins, and certain clubs will hope for some much-needed upturn in fortunes with it. As games continue to come thick and fast in the Premier League, Gameweek 17 of the 2020/21 season has begun. And, two teams that are in desperate need of an upswing in fortunes meet at the Hawthorns on Saturday night, when West Bromwich Albion will play hosts to Arsenal.

West Bromwich Albion have been quite hapless in the first three months of the 2020/21 season. Back in the Premier League after securing automatic promotion from the Championship last term, the Baggies have struggled to give a good account of themselves, winning just one game till date. Their latest result saw them being trounced 5-0 by Leeds United, leaving them five points adrift of safety.

Arsenal, like West Brom, have endured a season from hell so far. The Gunners have picked up a mere 20 points from their first 16 Premier League games, which has left them languishing at 13th on the table. This has been contributed by their inability to score goals consistently and, therefore, string together a positive run of results. However, Mikel Arteta & co. come into the game on the back of successive wins to end 2020.

West Brom held Arsenal to a 1-1 draw the last time these two sides met at the Hawthorns, way back in December 2017. Ahead of the latest meeting between the two sides, The Hard Tackle takes a closer look at the encounter.

Sam Allardyce does not have any fresh injury concerns hampering his preparations ahead of the visit of Arsenal. On Saturday, the West Bromwich Albion could be bereft of the services of as many as five first-team players.

Conor Townsend is a certainty to miss out, as he continues to recover from a knee injury. Captain Jake Livermore is unavailable as well, as he serves the final of his three-match ban. Meanwhile, the likes of Hal Robson-Kanu (wrist), Kyle Bartley (calf) and former Arsenal defender Kieran Gibbs (thigh) face late fitness tests to determine their availability.

With games coming at a rapid pace in the Premier League, it is unlikely that Allardyce will take a chance with the trio’s fitness, meaning they could be left out of the starting lineup against Arsenal. Sam Johnstone is an automatic pick between the sticks, with West Brom likely to line up in a 4-5-1 formation on Saturday.

Semi Ajayi and Dara O’Shea should pair up once again at the heart of the West Brom defence, although Branislav Ivanovic is also pushing for a start. Gibbs and Townsend’s continued absence means that Lee Peltier picks himself in the left-back slot once again, while Darnell Furlong will be deployed on the right side.

With Livermore also unavailable, Romaine Sawyers, who scored the embarrassing own goal last time out against Leeds United, will retain his spot at the base of the five-man midfield. Those around Sawyers will be tasked with pushing West Brom forward when they break on the counter. The quartet will also have the responsibility of remaining disciplined off the ball.

Matheus Pereira is in line to be recalled to the starting lineup, taking his place on the right flank. As a result, Grady Diangana should be moved out to the left wing, with Matt Phillips and Conor Gallagher will be the advanced midfielder reprising the no. 8 roles. Finally, Karlan Grant should lead the line for West Brom against Arsenal, with Callum Robinson dropping to the bench. 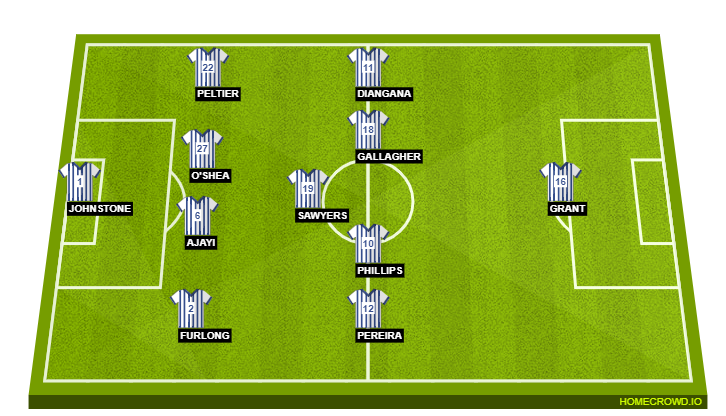 Unlike his counterpart in the West Brom dugout, Mikel Arteta has been handed a double boost ahead of the trip to the Hawthorns. On Saturday, the Arsenal manager will only have to make do without two first-team players.

Gabriel Magalhaes continues to recover from the coronavirus and is in self-isolation. Thomas Partey remains unavailable as well, although he is inching closer to his return and is set to resume full training soon. As for the good news, David Luiz and Willian are available after rejoining full training this week.

Also, Bukayo Saka remains at Arteta’s disposal, having recovered from a minor leg injury he picked up last time out against Brighton & Hove Albion. The English international should, therefore, be included in the starting lineup against West Brom, with any rest likely to be afforded in the FA Cup third round fixture against Newcastle United next week. The same goes for several other regulars.

Bernd Leno will be stationed in goal, with Arsenal expected to be set up in a 4-2-3-1 formation, as has been the case lately. The big question mark pertains to Luiz’s place in the starting lineup. Pablo Mari, though, should get the nod to partner Gabriel Magalhaes at the heart of the Arsenal defence, with Hector Bellerin and Kieran Tierney picking themselves as the two full-backs.

Up ahead in midfield, Granit Xhaka and Mohamed Elneny are likely to form the double pivot once again, although Dani Ceballos, whose Arsenal future is uncertain, is pushing for a start as well. Saka will take his place on the right flank while Gabriel Martinelli should pip Willian and Nicolas Pepe in the second wide berth.

Pierre-Emerick Aubameyang should once again lead the line for Arsenal against West Brom, even though he is in desperate need of improving his form. Playing off of the Arsenal captain should be Alexandre Lacazette, who has found the back of the net in each of the last two games, meaning Emile Smith Rowe misses out despite impressing against Chelsea and Brighton.

Aubameyang needs to step up. (Photo by Alex Pantling/Getty Images)

If there is one player who best embodies the struggles that Arsenal have endured this season, one does not need to look much beyond the club captain. When Pierre-Emerick Aubameyang penned a new contract with the Gunners back in September, everyone associated with the club were invariably excited at the prospect of having his future secured.

However, the 31-year-old’s campaign has just failed to take flight, even as Arsenal have looked a bit better in the past week or so. Aubameyang was not quite at his best against Brighton either and his struggles are starting to get a bit too concerning. With the relegation-battling West Brom up next, it is high time for Aubameyang to get his scoring boots back on.

This is another one of those matches that might not have too many goals in it. Granted, West Brom come into this game after receiving a 5-0 mauling at the hands of Leeds United last time out. But, it goes without saying that Sam Allardyce will set his team up to absorb the pressure that Arsenal look to create.

The Baggies have proven their mettle against Manchester City and Liverpool. A similar match-up should ensue at the Hawthorns on Saturday as well, even though Arsenal have been quite improved in the past week or so. In the end, there should be very little to separate the two sides, although slim margins could define a winning result too. The Hard Tackle, therefore, predicts a 1-1 draw.