Manchester United will be eager to bounce back to winning ways in the Premier League when they welcome Wolves to Old Trafford on Tuesday.

The games continue to come thick and fast in the Premier League, which is serving us at least one game per day in this busy festive period. On Tuesday, Manchester United will be in action again, as they play hosts to Wolves at Old Trafford.

Manchester United have steadied the boat after a rocky start to their Premier League campaign. The Red Devils have now gone nearly two months without defeat in the competition, with Arsenal the last team to get the better of them. Six wins and two draws in eight subsequent games have now meant that Ole Gunnar Solskjaer & co. are just five points behind leaders Liverpool, with a game in hand.

Wolves, on the other hand, have once again been a hard team to beat, albeit with many displays that have left their fans frustrated. Indeed, the Midlands club have managed to win just two of their last eight Premier League games, although they did grab a crucial point against Tottenham last time out. This run has left Nuno Espirito Santo’s men 11th on the table.

The corresponding fixture last season was a drab affair that ended in a goalless draw, as Bruno Fernandes made his debut for Manchester United. Ahead of the latest meeting between the two sides, The Hard Tackle takes a closer look at the encounter.

Marcus Rashford and Victor Lindelof are doubts to feature for Manchester United against Wolves. (Photo by Stu Forster/Getty Images)

Ole Gunnar Solskjaer has a couple of fresh injury concerns hampering his preparations ahead of the visit of Wolves. On Tuesday, the Manchester United manager could be bereft of the services of as many as four first-team players.

Marcos Rojo and Phil Jones are definitely out, but the two players were never going to be involved anyway. In particular, Solskjaer is sweating over the fitness of Victor Lindelof and Marcus Rashford following the 2-2 draw with Leicester City. Lindelof is struggling with a chronic back problem while Rashford’s troublesome shoulder makes him a doubt.

The duo might be given ample rest to recuperate from their respective issues, meaning it is only likely that they will come off the bench against Wolves. Meanwhile, Daniel James is a major doubt for Manchester United as well after sustaining a knock last time out. However, in some good news, Aaron Wan-Bissaka could be available.

The first-choice Manchester United right-back missed the last game due to a minor issue but is in line to make his return against Wolves. On the left flank, Alex Telles could come in for Luke Shaw amid the fixture pile-up, while Lindelof’s potential absence means Eric Bailly pairs up with captain Harry Maguire at the heart of the Manchester United defence.

Up ahead in midfield, a new-look double pivot will witness Paul Pogba and Nemanja Matic return, with Fred and Scott McTominay being given a breather. The returning Pogba will have the task cut out for him, as Manchester United look to assert their dominance right from the back.

Finally, in attack, the fact that Rashford is likely to be benched means Anthony Martial should start as a left-winger against Wolves, with Edinson Cavani leading the line for Manchester United. On the right flank, Mason Greenwood should replace James, while talisman Bruno Fernandes, who has recently iterated his desire to win every trophy on offer with United, reprises the no. 10 role.

Unlike his counterpart in the Manchester United dugout, Nuno Espirito Santo has not been bogged down by any fresh roster issues ahead of the trip to Old Trafford. On Tuesday, the Wolves manager will only have to make do without three first-team players.

The major absentee for Wolves remains star striker Raul Jimenez, who is recovering from a skull fracture. Jonny Otto is a long-term absentee as well due to a knee injury while Leander Dendoncker misses out due to a muscle injury. However, in some good news, Willy Boly is fit and might be back in the starting lineup against Manchester United.

Roman Saiss should make way for Boly at the heart of the Wolves defence, with captain Conor Coady being his partner. Wolves will once again line up in the new 4-2-3-1 formation that Nuno has utilised quite regularly this season, with Rui Patricio in goal, while Nelson Semedo and Rayan Ait-Nouri being the full-back pairing.

Dendoncker’s continued absence means there is no looking past Ruben Neves and Joao Moutinho in the double pivot. The rest of the starting lineup picks itself as well, with Fabio Silva once again spearheading the Wolves attack in the absence of Jimenez. Adama Traore, Daniel Podence and Pedro Neto will be the players playing off of Silva, with the trio forming a fluid trifecta in the final third. 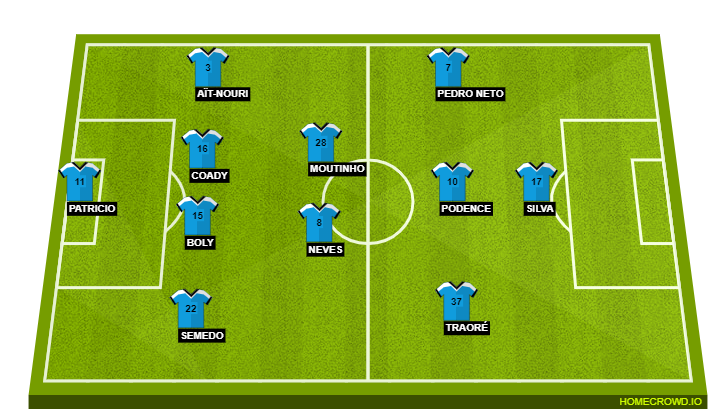 Edinson Cavani will be raring to go. (Photo by Mark Robinson/Getty Images)

Widespread expectations were restricted to a minimum when Edinson Cavani arrived at Old Trafford on a free transfer. With the wounds of the Alexis Sanchez episode still fresh, Manchester United fans were understandably skeptical when the Uruguayan striker joined their club.

Cavani, though, has allayed any and every fear with a stellar first couple of months as a Manchester United player; so much so, that Manchester United already want to extend his stay at the club. The 33-year-old has 4 goals and 2 assists in 13 appearances, with a direct goal involvement coming every 84 minutes, which is quite an impressive number, to say the least.

With Marcus Rashford likely to be given a breather against Wolves, Cavani will make a rare start in the Premier League. And, at a time when Anthony Martial has shown some signs of returning to form, a strong showing could give Ole Gunnar Solskjaer some food for thought when it comes to the central striker’s berth.

This is not a straightforward prediction to make. Wolves are yet to be beaten by Manchester United in the Premier League since their return a few years ago. Having said that, United have had an extra day off as compared to Wolves, who played the final match of Gameweek 15 on Sunday night.

With Nuno Espirito Santo having quite a thin squad at his disposal, the visiting players could have a jaded look on Tuesday. Manchester United, on the other hand, will boast of the services of a fresh Mason Greenwood and an Edinson Cavani who will be raring to go.

So, after dropping a couple of points last time out against Leicester City, this looks like a game in which they will return to winning ways and finally break the curse involving Wolves in the Premier League. The Hard Tackle, to that end, predicts a 2-1 win for Manchester United.