Inter Milan will hope to consolidate their place on the Serie A table when they meet Hellas Verona at Stadio Marcantonio Bentegodi in their final game of the year.

The action in Serie A is set to come to a temporary halt ahead of the holiday period, with Matchday 14 of the 2020/21 season bringing the curtains down on 2020 in Italy. Inter Milan will have the top spot in the standings in sight when they travel to Stadio Marcantonio Bentegodi to take on Hellas Verona on Wednesday.

Hellas Verona have once again impressed with their solid performances paving way for a promising campaign. Currently placed ninth on the table, the Gialloblu have lost just thrice in their opening 13 games, but have struggled to kill games off as well. This has meant that they have only won five times, although they do boast the second-best defensive record in Serie A this term.

Inter Milan, on the other hand, have recovered well from a sluggish start to their 2020/21 Serie A campaign. Having won each of their last six league games, the Nerazzurri have closed the gap to local rivals and leaders AC Milan to just one point. With the Rossoneri facing a tricky test in Lazio on Wednesday, there is a chance that Antonio Conte & co. could end 2020 atop the table.

The corresponding fixture last season saw Hellas Verona and Inter Milan play out an entertaining 2-2 draw, with a late strike by Miguel Veloso earning the hosts a point. Ahead of the latest meeting between the two sides, The Hard Tackle takes a closer look at the encounter.

Ivan Juric has a number of pressing roster issues hampering his preparations ahead of the visit of Inter Milan. On Wednesday, the Hellas Verona manager could have to make do without as many as six first-team players.

Antonin Barak is serving the second of his three-match suspension following his dismissal against Sampdoria. In addition to Barak, Juric is also bereft of the services of Marco Benassi, Ronaldo Vieira, Nikola Kalinic and Andrea Favilli, while star striker Simone Di Carmine is a major doubt as well.

With the Verona boss continuing to sweat over the fitness of Di Carmine, it is likely that Eddie Salcedo will lead the line for the Gialloblu against Inter Milan. On the opposite end, Marco Silvestri is a certainty between the sticks for the hosts, who will line up in the 3-4-2-1 formation in front of him.

With Juric facing no issues in defence, the three-man central defensive unit should comprise of Federico Ceccherini, Koray Gunter and Matteo Lovato. Meanwhile, Davide Faraoni and Federico Dimarco should once again be the two wing-backs.

In midfield, captain Miguel Veloso will hold the key and along with Adrien Tameze, he will look to keep things tight in the middle of the park, hoping to negate the influence of Nicolo Barella in particular. Mattia Zaccagni and Darko Lazovic will be the advanced midfielders, with the duo in-charge of supporting Salcedo by providing the creative impetus higher up the pitch. 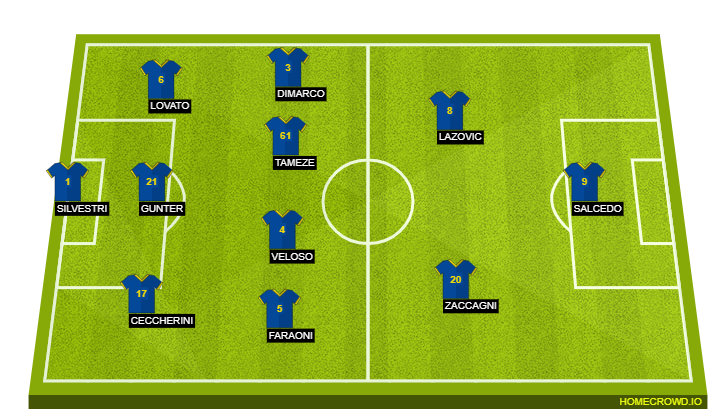 Unlike his counterpart in the Hellas Verona dugout, Antonio Conte does not have any major fitness problems to contend with. On Wednesday, the Inter Milan manager is only likely to be bereft of the services of a couple of first-team players.

The major absentee for Inter is Alexis Sanchez, who continues to miss out due to a muscle injury. Apart from the Chilean, Andrea Pinamonti is the only other absentee for the visitors, with Conte set to have a full-strength squad at his disposal soon.

In the continued absence of Sanchez, Lautaro Martinez will continue to be Romelu Lukaku’s strike partner despite his recent goal drought. Lukaku and Martinez will be supported from midfield by Nicolo Barella and Stefano Sensi, who should come in for Roberto Gagliardini following the latter’s sub-par showing against Spezia.

Marcelo Brozovic will play the Anchor Man role in the middle of the park, but the Croat’s output on the ball will also hold the key for Inter Milan against Hellas Verona. As for the wing-back positions, Achraf Hakimi should start ahead of Matteo Darmian after an impressive performance last time out while on the opposite flank, Ashley Young should be given the nod over Ivan Perisic.

Finally, at the back, the three-man central defensive unit of Milan Skriniar, Stefan de Vrij and Alessandro Bastoni should remain unchanged, with captain Samir Handanovic picking himself between the sticks. 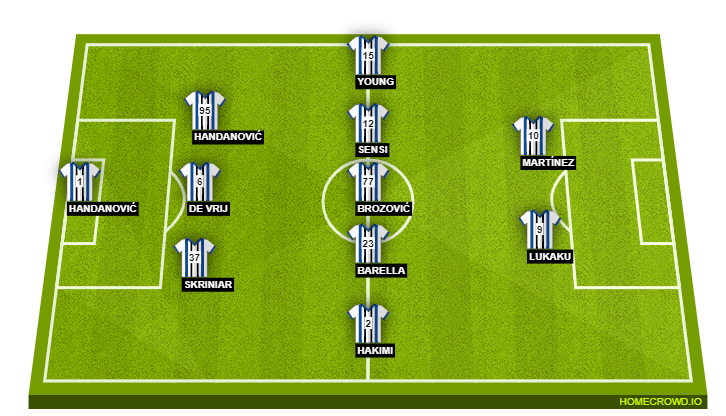 What a stunning turnaround in fortunes has Romelu Lukaku enjoyed since joining Inter Milan from Manchester United. Now regarded as one of the very best strikers in the world, the Belgian international is the single-most influential figure for the Nerazzurri, having made a brilliant start to the ongoing campaign.

So far this season, the 27-year-old has 15 goals and 2 assists in 17 appearances across competitions. His minutes to goal ratio in Serie A is quite stunning as well, with a strike coming every 79 minutes. So, it goes without saying that with Lautaro Martinez enduring a goal drought, Lukaku will need to be at his very best if Inter Milan are to get past a resolute Hellas Verona side.

This is one of those games that is unlikely to have many goals in it. These two sides are extremely accomplished in the defensive phase and it is highly likely that the game will majorly be played out in midfield, with both the goalkeepers not expected to be forced into action all too often.

In the end, the difference-maker should be the irresistible form of Romelu Lukaku, which combined with Hellas Verona’s recent poor form at home should pave the way for a narrow win for Inter Milan. To that end, The Hard Tackle predicts a 1-0 win for Antonio Conte & co. to end 2020 on a high.