AC Milan will hope to close out 2020 remaining perched atop the Serie A table when they welcome Lazio to San Siro on Wednesday.

The curtains are set to fall on Serie A action for 2020, with Matchday 14 of the 2020/21 season being till the end of the year. Table-toppers AC Milan will be eager to head into the new year still perched atop the standings and will aim for a positive result when they welcome Lazio to San Siro on Wednesday evening.

AC Milan have been the pacesetters in the first third of the 2020/21 Serie A season. The Rossoneri have been on the money right from the get-go and are yet to lose a game after their first 13 outings. Stefano Pioli & co. are currently ahead of local rivals Inter Milan by a solitary point and come into this game on the back of a hard-fought 2-1 win over Sassuolo this past weekend.

Lazio, on the other hand, have blown hot and cold so far in the ongoing campaign, winning just 6 of their 13 league games till date. The Bianconcelesti have been pegged back by their inability to string together a winning run in the first three months of the season, managing to grab all three points in just two of their last 5 Serie A fixtures, including their most recent game – a 2-0 win over Napoli.

The corresponding fixture last season saw Lazio eke out a narrow 2-1 win over AC Milan, with Joaquin Correa scoring the late winner. Ahead of the latest meeting between the two sides, The Hard Tackle takes a closer look at the encounter.

Stefano Pioli has a major crisis on his hands ahead of the visit Lazio. On Wednesday, the AC Milan manager could be bereft of the services of as many as seven first-team players, with several regulars missing out for the hosts.

The major absentees for Milan against Lazio will be star striker Zlatan Ibrahimovic (calf) along with first-choice central midfield duo of Ismael Bennacer (thigh) and Franck Kessie (suspended). The other players missing out for the Rossoneri are Simon Kjaer, Matteo Gabbia, Sandro Tonali and Ante Rebic, meaning Pioli has little scope for rotations.

In the continued absence of Ibrahimovic and Rebic, Rafael Leao, who created history by scoring the fastest-ever goal in Serie A last time out against Sassuolo, will once again lead the line for Milan. Alexis Saelemaekers and Jens Petter Hauge ought to be the two wide men against Lazio, with Brahim Diaz reprising the no. 10 role.

Diaz will be deployed in the hole because Hakan Calhanoglu will likely have to play a deeper role on Wednesday in the absence of Bennacer, Kessie and Tonali. Calhanoglu will be the deep-lying playmaker, with Rade Krunic likely to start as the holding midfielder.

At the back, Kalulu’s improved display against Sassuolo means the youngster should pair up with captain Alessio Romagnoli at the heart of the AC Milan defence. Davide Calabria and Theo Hernandez will hold the key for the hosts with their forays down the flanks while Gianluigi Donnarumma will need to be at his very best against a dangerous Lazio attack. 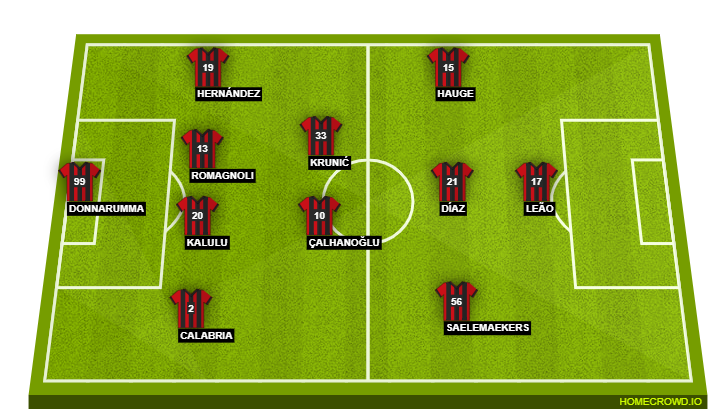 Unlike his counterpart in the AC Milan dugout, Simone Inzaghi does not have as many pressing injury concerns hampering his preparations ahead of the trip to San Siro. On Wednesday, the Lazio boss is only likely to have to make do without three first-team players.

Senad Lulic, Lucas Leiva and Mohamed Fares are the likely absentees for Lazio against AC Milan, but Inzaghi has enough cover within his squad to cope with the unavailability of the trio. The major concern for Inzaghi, though, is the fitness of Francesco Acerbi and the Lazio manager might not risk him against Milan.

As a result, Wesley Hoedt should partner up with Luiz Felipe and Stefan Radu in the three-man central defensive unit. In goal, former AC Milan star Pepe Reina should get the nod over Thomas Strakosha owing to his fine form in recent weeks.

Meanwhile, the absence of Lulic means that Adam Marusic should line up in the left wing-back slot, with Manuel Lazzari a certainty on the opposite flank. In the middle of the park, Danilo Cataldi is likely to reprise the Anchor Man role in the absence of Lucas while Luis Alberto, who has recently been linked with AC Milan, and Sergej Milinkovic-Savic pick themselves in the middle of the park.

Finally, in some good news, Joaquin Correa should be fit enough to start, meaning he will be Ciro Immobile’s strike partner against AC Milan, with Felipe Caicedo being an impact substitute for Lazio. 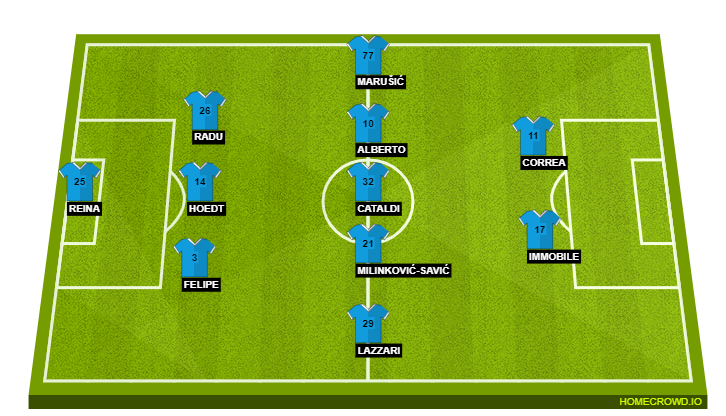 If there is one player who has benefited immensely more than anyone from the appointment of Stefano Pioli as the AC Milan manager last year, it’s Hakan Calhanoglu. Ever since his breakout in the Bundesliga several years ago, the Turk had often flattered to deceive, even doing so after joining AC Milan in 2017.

However, since the turn of the year, Calhanoglu has turned over a new leaf at San Siro, becoming as important a player for the Rossoneri as Zlatan Ibrahimovic, if not more. Now the creative supremo for Milan, the 26-year-old will likely be reprising the deep-lying playmaker role against Lazio and will need to step up from the double pivot this time around.

With Pioli missing a number of key players, Calhanoglu will need to take it upon himself to inspire Milan to a big result to end 2020 on a high. Will the Turkish playmaker, who has been linked with Manchester United lately, deliver the goods for the umpteenth time this term?

This is one of those games that could go either way, despite the fact that AC Milan are yet to be beaten in Serie A this season. Indeed, with the Rossoneri missing several key players, Lazio would feel the league leaders are ripe for the taking, especially as they come into this game on the back of a big win over Napoli this past weekend.

However, Stefano Pioli has instilled a sense of pride and resolve in this AC Milan side, which is why they have been so hard to beat ever since the turn of the year. That should be the case against Lazio as well, with the Rossoneri riding on Hakan Calhanoglu’s brilliance once again. The Hard Tackle, therefore, predicts Milan to grab a hard-fought 2-1 win, ending 2020 atop the Serie A table.