Juventus host low-lying Fiorentina on Tuesday as they look to build pressure on Serie A leaders AC Milan and end 2020 on a high.

Juventus have seen themselves have an upturn in form since the disappointing draw versus Benevento, winning five out of the subsequent six games and drawing one. The pick of these results has been the win over Barcelona and the most recent 4-0 drubbing of Parma.

With only one game to go before the holiday period, Juventus would be hoping to continue their improved run and close the gap to the Milan clubs. Cristiano Ronaldo, who scored yet another crucial brace in the last game, will play an important role as Juventus look to earn another three points.

On the other hand, Cesare Prandelli has failed to win a league game since taking over as the new Fiorentina manager. Prandelli has three draws and as many losses; and La Viola hardly exude much confidence ahead of the game against Juventus.

Prandelli has picked up a pragmatic approach at Fiorentina with a new 3-5-2 shape that has helped him to solidify at the back. However, it is in the offensive phase where Fiorentina have lacked given the lack of fitness of Franck Ribery and Jose Callejon.

Despite being agonisingly close to the relegation zone, Fiorentina have earned valuable draws versus the likes of Sassuolo and Hellas Verona. Prandelli’s men would hope to take confidence from those result and try to earn an odd point against Juventus. The Hard Tackle now takes a closer look at the two sides.

Pirlo confirmed: “Dybala trained with the team today and has good chances to be called up against Fiorentina.” #JuveLive

Juventus boast the best defensive record in the league, having conceded just 10 goals in 13 matches, and remain unbeaten in Serie A till date. Andrea Pirlo is not expected to make a change to his stable backline as Gianluca Frabotta could be handed a rare start for the Bianconeri, although Alex Sandro should start on the left flank.

Juan Cuadrado, though, should be returning to the side at the expense of Danilo, as Juventus shift to a 4-4-2 formation. Merih Demiral remains sidelined and his inclusion would seem unnecessarily rushed, which means that Matthijs de Ligt would join Leonardo Bonucci at the heart of the Juventus defence.

Aaron Ramsey has endured a great improvement in form and is expected to start from the right flank in Pirlo’s 4-4-2. Federico Chiesa is likely to make a start, with Adrien Rabiot and Rodrigo Bentancur playing in the central area. Weston McKennie has been in good form lately, but should sit this one out. Meanwhile, Arthur remains ruled out from the fixture. 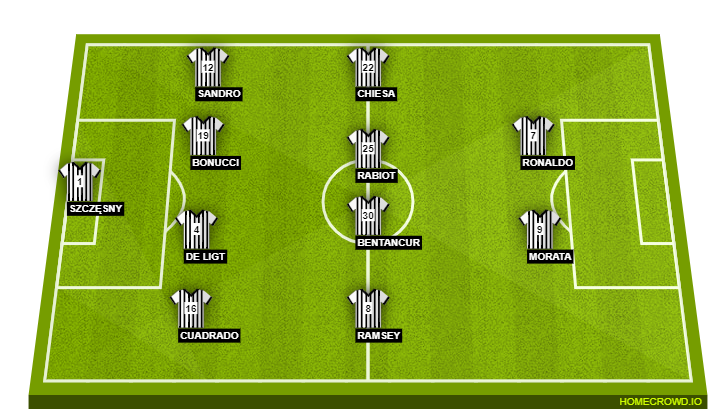 It has been far from an ideal start for Cesare Prandelli who has struggled to string together a set of positive results. They are at full strength and would hope to cause a big upset when they travel to play the Bianconeri. Midfielder Alfred Duncan has travelled with the squad but is unlikely to feature.

The Viola players travelling to Turin to face Juventus in our final game of 2020 🔥#ForzaViola 💜 #JuveFiorentina pic.twitter.com/mch3BWzGnl

Gaetano Castrovilli and Sofyan Amrabat are expected to run the show in midfield alongside Erik Pulgar, who could also be handed a start. Meanwhile, Dusan Vlahovic is expected to start alongside Christian Kouame after a decent last few performances. Veteran Franck Ribery should be benched after being burnt out beyond his means.

In defence, Cristiano Biraghi returns from injury and is likely to play on the left side while Lorenzo Venuti should operate from the right. Fiorentina’s talented backline, consisting of the experienced Martin Caceres, Nikola Milenkovic and German Pezzella, is expected to sit back deep and defend and hopefully hurt Juventus on the counter with Kouame’s pace. 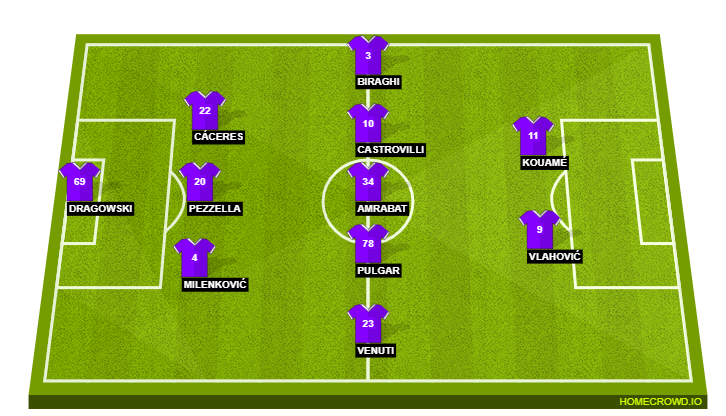 In a match involving the world’s greatest, it is hard to pass the buck beyond them. Ronaldo is expected to produce yet another convincing performance after a stellar display against Parma this past weekend and will be key to Juventus’s goalscoring power in this match.

Cristiano Ronaldo has become only the fifth player to score at least 32 Serie A goals in a single calendar year, the first since Omar Sivori in 1961. 🐐🇵🇹pic.twitter.com/ZEWBTgRic8

Ronaldo scored his 6th brace of the season versus Parma last weekend, which is an astonishing record, even for a player of Ronaldo’s quality. The Portuguese would be hoping to continue this rich vein of form as Juventus host Fiorentina.

Fiorentina have improved defensively of late and will look to prevent Juventus from doing a lot of damage to them. Since Cesare Prandelli’s takeover, Fiorentina have only conceded 3 versus the free-flowing Atalanta. Despite their defence being rather resolute lately, Juventus should be comfortable victors as they look to inflict more misery upon Fiorentina. We predict a 2-0 win for the hosts.