Barcelona will be hoping to stretch their recent winning run when they welcome Valencia to Camp Nou on Saturday.

Footballing action across Europe continues to come at a relentless pace and the 2020/21 La Liga season moves into Matchday 14 this weekend. Barcelona will be in action on Saturday evening, when they play hosts to Valencia at Camp Nou, hoping to continue their charge up the table.

Barcelona have made a rocky start to the 2020/21 season, with the appointment of Ronald Koeman not quite having the desired effect. However, after finishing runners-up in their group in the UEFA Champions League, the Blaugrana have made amends, winning each of their last two games in La Liga to climb up to 5th on the table.

Valencia, on the other hand, have been enduring a season from hell, with their issues off the field compounding over the course of 2020. Los Che have managed to win just three of their 13 games so far, which has left them perilously close to the drop zone. However, their win over Real Madrid earlier this campaign suggests they are still not a side to be taken lightly, despite their struggles.

The corresponding fixture last season saw Barcelona cruise to a 5-2 win over Valencia, with the likes of Ansu Fati, Frenkie de Jong, Gerard Pique and Luis Suarez all on target for the Catalans. Ahead of the latest meeting between the two sides, The Hard Tackle takes a closer look at the encounter.

Ansu Fati remains on the sidelines due to an injury. (Photo by Alex Caparros/Getty Images)

Ronald Koeman does not have any fresh injury concerns hampering his preparations ahead of the visit of Valencia. On Saturday, the Barcelona manager will continue to be bereft of the services of four first-team players.

While Koeman had been sweating over the fitness of Oscar Mingueza after he hobbled off against Real Sociedad earlier this week, the young defender has made himself available and is a part of the matchday squad. Therefore, the likes of Gerard Pique, Sergi Roberto, Ousmane Dembele and Ansu Fati remain the only absentees for Barcelona.

Despite Mingueza being available, Clement Lenglet was expected to return to the starting lineup against Valencia; and the Frenchman should pair up with Ronald Araujo at the heart of the Barcelona defence, with Sergino Dest and Jordi Alba continuing as the two full-backs. In goal, there is no looking past Marc-Andre ter Stegen.

Up ahead in midfield, Sergio Busquets’s early substitution against Real Sociedad suggests that he is likely to start in the double pivot alongside Frenkie de Jong once again. The likes of Miralem Pjanic, Carles Alena and Riqui Puig, therefore, continue to remain options on the bench.

Finally, in attack, there is unlikely to be any changes made following the rampant showing versus Real Sociedad. Pedri should keep his place ahead of Philippe Coutinho to reprise the no. 10 role, while Martin Braithwaite, Antoine Griezmann and Lionel Messi are now regulars in the side anyway. 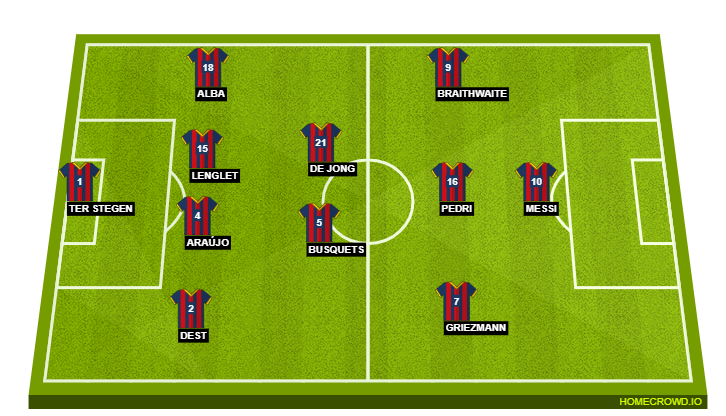 Like his counterpart in the Barcelona dugout, Javi Gracia is not bogged down by any fresh fitness issues ahead of the trip to Camp Nou. On Saturday, the Valencia manager will continue to have to make do without three first-team players.

Jasper Cillessen’s fitness has been a major concern this season and the Dutchman remains on the sidelines due to a muscle injury. In addition, Hugo Guillamon and Kevin Gameiro also miss out for Los Che against Barcelona due to their respective issues.

In Cillessen’s continued absence, Jaume Domenech is the obvious pick in goal, with Valencia likely to line up in a 4-4-2 formation in front of him. Guillamon’s absence means Mouctar Diakhaby is an automatic pick to partner up with Gabriel Paulista at the heart of the Valencia defence, while Daniel Wass and Jose Gaya, back from a hamstring injury, should be the full-back pairing.

Up ahead in midfield, Carlos Soler will pull the strings for Valencia and look to counter the threat posed by Barcelona. The Spanish international will have Uros Racic as his central midfield partner, with the Serb looking to keep things tight in the middle of the park.

Out wide, the impressive Yunus Musah will look to take the game to Barcelona from the right flank, with Goncalo Guedes expected to occupy the left-wing berth. Finally, Maximiliano Gomez, who has been linked with a possible move away from Valencia, will have Manu Vallejo as his strike partner against Barcelona. 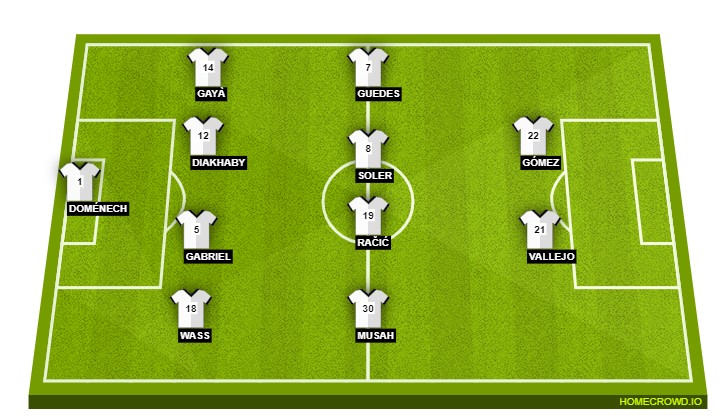 It has been an odd sort of a campaign for Griezmann. While the Frenchman has decidedly made a huge improvement in the early stages of the 2020/21 season, regular returns in the form of goals still continue to desert him, much to his frustration and as a result, he has just 5 goals and 2 assists in 16 appearances across all competitions so far.

His frustrations reached a head against Real Sociedad when despite being a menace for the visitors he returned home without anything to show for his efforts. With Barcelona finally moving up the table in La Liga, it is now up to Griezmann to find his scoring touch again and help the Blaugrana in their quest to regain the title. A big game against Valencia beckons.

Two weeks ago, one might have predicted Barcelona to struggle in this game. However, after a couple of impressive displays, the Catalan giants come into this tie as the overwhelming favourites, although they do need to be more clinical against Valencia in order to enjoy a more comfortable evening this time around.

As iterated by Javi Gracia, Valencia will be expected to take the game to Barcelona, just as they had against Real Madrid earlier in the campaign. However, the return of Clement Lenglet should add more steel to Barcelona’s backline while on the opposite end, the likes of Antoine Griezmann and Lionel Messi will make the difference. The Hard Tackle, thus, predicts a 2-0 win for Barcelona.