Manchester United will hope to continue their fine form on the road in the Premier League when they take on Sheffield United at Bramall Lane on Thursday.

Footballing action across Europe is starting to pick up pace, with Gameweek 13 of the 2020/21 Premier League set to be culminated on Thursday. The only game on the night will have Sheffield United play hosts to Manchester United at Bramall Lane, with the Blades still in search of their first league win of the season.

Sheffield United seem to have been struck by the infamous second season syndrome, as they are still in search of their first win of the season in the Premier League. In fact, the Blades, who took the Premier League by storm last term, have raked in just a solitary point after their first 12 outings, with their struggles characterized by their inability to find the back of the net regularly.

Manchester United, on the other hand, have blown hot and cold so far in the 2020/21 season. The Red Devils have been quite dreadful at home, managing just 5 points in 6 Premier League games at Old Trafford. But, it is their form on the road that has been their saving grace, with Ole Gunnar Solskjaer’s charges winning each of their five away games so far – the best record in the division.

The corresponding fixture last season for a goalfest which ended in a 3-3 draw. Both Sheffield United and Manchester United went ahead before the spoils were shared by the two sides. Ahead of the latest meeting between the two sides, The Hard Tackle takes a closer look at the encounter.

Chris Wilder does not have any fresh injury issues hampering his preparations ahead of the visit of Manchester United. On Thursday, the Sheffield United manager will continue to be bereft of the services of three first-team players.

Jack O’Connell (knee) is a long-term absentee for Sheffield United, while fellow defender Kean Bryan (calf) and striker Oliver McBurnie (shoulder) are both set to miss out against Manchester United as well.

Despite his side’s struggles, Chris Wilder has stuck to his favoured 3-5-2 formation and there is unlikely to be any alteration to the setup against Manchester United either, with Aaron Ramsdale taking his customary place between the sticks.The three-man central defensive unit in front of Ramsdale picks itself in the absence of Bryan and O’Connell.

Phil Jagielka will partner Chris Basham and John Egan at the back while the two wing-backs, George Baldock and Enda Stevens will hold the key for Sheffield United with their deliveries from the flanks. Up ahead in midfield, John Lundstram could miss out, with Sander Berge, Ethan Ampadu and John Fleck likely to get the nod.

The trio will look to keep things tight in the middle of the park, with Fleck also charging higher up the pitch to look for scoring opportunities. Finally, Lys Mousset and David McGoldrick will form the strike partnership, with Oliver Burke, Rhian Brewster and Billy Sharp set to start on the bench. 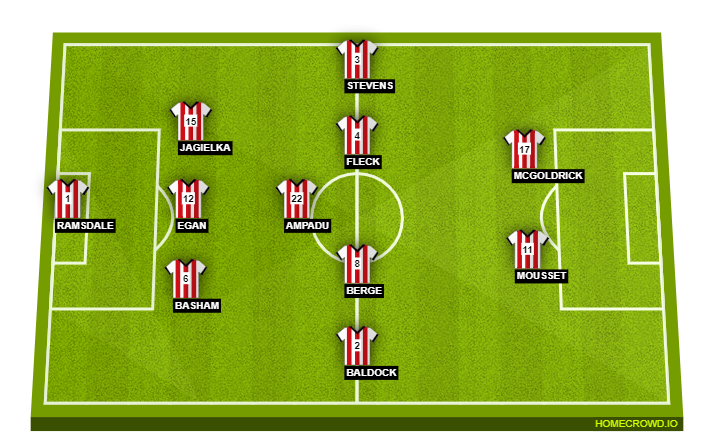 Much like his counterpart in the Sheffield United dugout, Ole Gunnar Solskjaer is hardly bogged down by many fitness troubles. On Thursday, the Manchester United manager will only have to make do without Edinson Cavani, who is still struggling with a knock.

As per Solskjaer, Cavani is likely to miss the trip to Bramall Lane to take on Sheffield United. As a result, Anthony Martial should come into the starting lineup to lead the line for Manchester United, who should line up in the 4-2-3-1 formation after being fielded in a 4-3-1-2 formation in the derby against Manchester City.

In goal, David de Gea remains the undisputed choice, meaning former Sheffield United loanee Dean Henderson missing out again. In front of him, the four-man defensive unit is unlikely to see a change, with Luke Shaw retaining his spot ahead of Alex Telles for a second successive game.

The likes of Aaron Wan-Bissaka, Victor Lindelof and Harry Maguire, though, pick themselves at the back, with very few alternatives at Solskjaer’s disposal for the trio anyway. Up ahead in midfield, the shift in formation means one of Scott McTominay and Paul Pogba will miss out.

Pogba is likely to get the nod as Fred’s partner in the double pivot following a few positive displays in the past week. As for the advanced midfield berth, Bruno Fernandes is an automatic pick to reprise the no. 10 role, looking to pull the strings higher up the pitch.

As iterated already, Martial will spearhead the Manchester United attack against Sheffield United, with Marcus Rashford and Mason Greenwood being the two wide men. Rashford has been blowing hot and cold in front of goal lately and will hope to do a better job on Thursday.

Time to step up further. (Photo by Dan Istitene/Getty Images)

Whenever Manchester United play it goes without saying that Bruno Fernandes will be the man under the spotlight. However, the performance of a certain Marcus Rashford is also likely to hold the key for the Red Devils when they take on Sheffield United on Thursday.

The English international has not been at his devastating best over the course of the campaign so far but has managed to step it up with some important showings. With games coming thick and fast, it is imperative that players not named Bruno Fernandes step up to make a difference for Manchester United.

Rashford has added to his creative game with aplomb this term, but his finishing has often been suspect. With a struggling Sheffield United up next for Manchester United, the time is right for Rashford to shoulder even more responsibility with a big haul at Bramall Lane on Thursday.

After a week to forget, Manchester United need to hit back and take advantage of sides alongside them dropping points. Chelsea’s loss to Wolves on Tuesday has given Manchester United the chance to at least usurp them on the Premier League table, if not climb into the top four.

Liverpool’s game against Tottenham on Wednesday further offers Manchester United to close the gap to the top and force their way into the title picture. The Red Devils might not really face a big challenge on their path to all three points, with Sheffield United being listless on both ends of the pitch more often than not. The Hard Tackle, therefore, predicts a 3-0 win for United.