Juventus will hope to keep pace with Serie A leaders AC Milan when they welcome Atalanta to the Allianz Stadium on Wednesday.

Footballing action across Europe is coming at a breakneck pace, with the busy festive period kicking off. In Serie A, champions Juventus will be in action on Wednesday evening, when they play hosts to Atalanta at the Allianz Stadium, hoping to extend their recent winning run.

Juventus seem to have found their footing at long last after a sluggish start to the 2020/21 season. The Bianconeri have struggled to embark on a run of wins in the first few months of the campaign, but that seems to be a thing of the past. Andrea Pirlo & co. have now won each of their last four games, including the UEFA Champions League Group G-clinching success against Barcelona.

Atalanta, on the other hand, have blown hot and cold in the first quarter of the season, which has further been hampered by infighting in the dressing room. Like Juventus, La Dea have not managed to go on a run of wins, managing to grab the maximum available points in just half of their 10 Serie A matches so far. Such a helter-skelter approach to the season has left them 8th on the table, as things stand.

The corresponding fixture last season saw Juventus come from a goal down twice to hold Atalanta to a 2-2 draw, courtesy of two penalties scored by Cristiano Ronaldo. Ahead of the latest meeting between the two sides, The Hard Tackle takes a closer look at the encounter.

Andrea Pirlo does not have any fresh injury issues hampering his preparations ahead of the visit of Atalanta. On Wednesday, the Juventus manager will continue to be bereft of the services of just two first-team players, with Giorgio Chiellini and Merih Demiral still nursing their respective injuries.

In the absence of the aforementioned duo, Matthijs de Ligt and Leonardo Bonucci will continue to pair up at the heart of the Juventus defence. Juan Cuadrado is a certainty in the right-back slot as well, but Danilo ought to come in for Alex Sandro on the left flank.

While Juventus will primarily line up in a 4-4-2 formation of paper, it will transition into a 3-5-2 in the offensive phases, with Cuadrado and Dejan Kulusevski, who will likely come in for Federico Chiesa, acting as wing-backs. In the middle of the park, Adrien Rabiot should hold on to his spot, but will likely have a new partner in Arthur, who was not involved in any capacity on the weekend.

Weston McKennie has been a breath of fresh air in this Juventus side lately and should continue to operate from the right-midfield role. Finally, the strike partnership of Paulo Dybala and Cristiano Ronaldo should continue following a fine performance by the former last time out against Genoa. 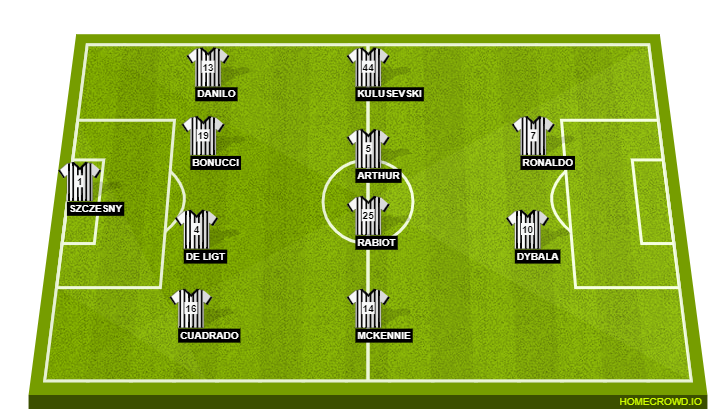 Like his counterpart in the Juventus dugout, Gian Piero Gasperini is not being bogged down by any fresh roster issues. On Wednesday, the Atalanta manager will continue to have to make do without three first-team players but is set to greet the return of one player from the sidelines.

Aleksei Miranchuk has recovered from a knock and is a part of the travelling squad to take on Juventus. However, the likes of Mattia Caldara, Mario Pasalic and Josip Ilicic are all still missing in action for Atalanta due to their respective fitness issues. In addition, captain Papu Gomez is likely to continue his exile from the side following his run-in with Gasperini.

In his absence, Rafael Toloi, who will line up alongside Berat Djimsiti and Cristian Romero in the three-man central defensive unit, will don the armband for Atalanta once again. Pierluigi Gollini will take his customary place in goal, with La Dea lining up in a 3-4-1-2 formation versus Juventus.

Hans Hateboer and Robin Gosens will hold the key for Atalanta against Juventus, with the duo providing width higher up the pitch. In the middle of the park, the onus will be on Maarten de Roon and Remo Freuler to keep things tight and deny the Juventus midfielders space to advance the ball forward much.

Gomez’s absence also means that Ruslan Malinovskyi will reprise the no. 10 role, pulling the strings higher up the pitch. The shift in formation from the last game, though, suggests that Luis Muriel will likely pair up as the strike partner to Duvan Zapata, who will be Atalanta’s leading man against Juventus on Wednesday. 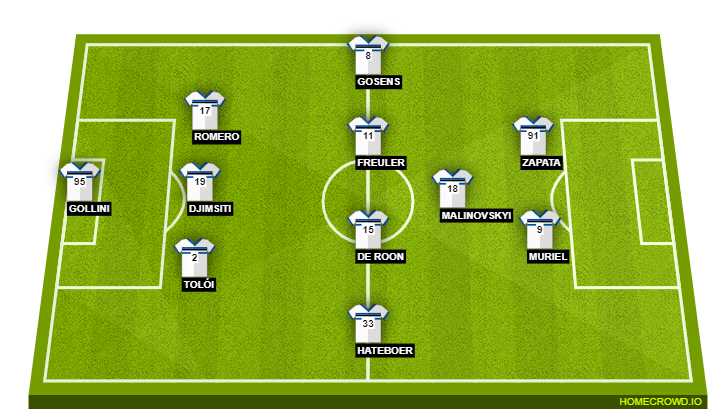 Will Ronaldo deliver the goods? (Photo by Alessandro Sabattini/Getty Images)

Is there anything slowing Cristiano Ronaldo down? Despite being on the wrong end of 30, the veteran Portuguese just continues to bang in the goals. However, despite his penchant for scoring not dying down anytime soon, it is important to note that the strikes from open play have started reducing somewhat.

Each of Ronaldo’s last four goals have come from the spot and against Genoa, he was genuinely out of action for some stretched periods. That has to be a concern for the player himself, and one can expect someone like Ronaldo to take it in his stride and make corrections. Expect those corrections to be made against Atalanta this week.

Atalanta appear to be in some sort of a turmoil, even if results do not necessarily suggest that. The dressing room infighting has got to leave La Dea unsettled and with Juventus starting to come into some sort of rhythm slowly, this is just not the right time for such shenanigans.

Therefore, expect the Serie A champions to pounce and get over the line with three points, although Atalanta certainly have what it takes to breach Wojciech Szczesny’s goal once. The Hard Tackle predicts a 2-1 win for Andrea Pirlo & co. to make it five wins in a row across all competitions.